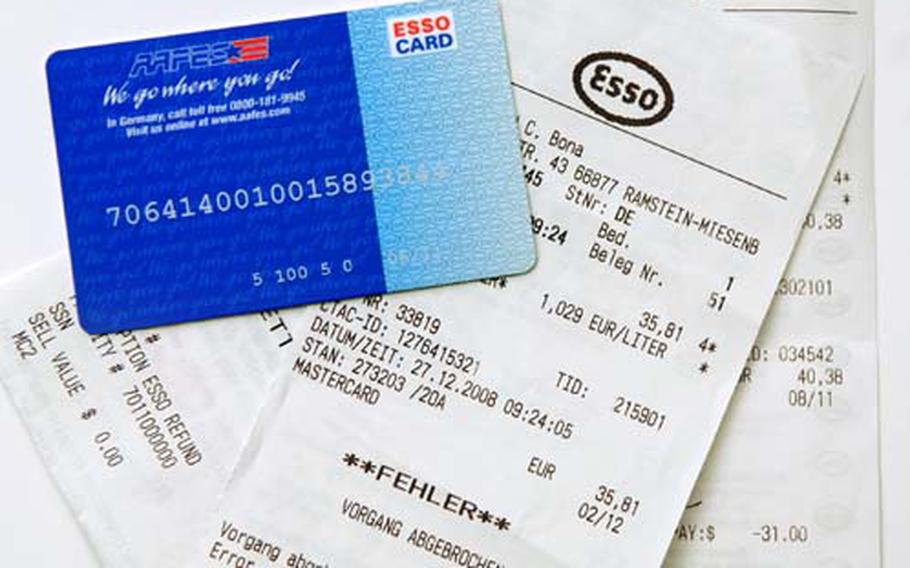 A picture of the Esso gas card with receipts from recent gas transaction mistakes. "Fehler," is German for error, meaning the AAFES gas card was rejected by the gas station. (Photo illustration by Ben Bloker / S&S)

The effects of a Dec. 20 fuel pricing error by the Army and Air Force Exchange Service reverberated through the holiday, adding insult to injury as an unknown number of fuel ration card users who had been overcharged were later forced to pay full price for gas and diesel at Esso stations across Germany.

AAFES has so far not said how many card users were affected by the initial error, which left customers paying nearly four times the listed price for fuel at German Esso stations.

As a result of the overcharges, the prepaid balance on some customers&#8217; fuel ration cards plunged below zero. Because cards cannot be used to buy tax-free fuel if they carry a negative balance, some got stuck paying full German prices during their next trip to the pump &#8212; even though AAFES&#8217; mistake caused them to be overdrawn.

"The problem that I had was that my trip didn&#8217;t end on Saturday so, on Sunday, when I refueled again, I went into the negative on money," Sgt. 1st Class Roger Muzzy, a member of the 2nd Stryker Cavalry Regiment, wrote in an e-mail to Stars and Stripes. "I needed to refuel again on the way home and had to come out my pocket because the card wouldn&#8217;t work!"

It&#8217;s not known how many people ended up in a similar situation.

AAFES has been working for more than a week to remedy the mistake and its aftermath, and has vowed to reimburse customers both for the original overcharge and for the out-of-pocket fuel expenses that resulted from their accounts being overdrawn.

"AAFES is proactively working on the accounts with a negative balance on their pre-pay amount and are working in an effort to ensure that if customers try and get fuel they are able to," Lt. Col. David Konop, an AAFES spokesman, wrote Monday in an e-mail.

"Any customer who experiences a refusal to accept the card because of this error will be reimbursed the difference owed."

But while the computer-managed fuel ration system allows AAFES to identify which customers were overcharged, the refunds aren&#8217;t happening automatically.

Customers must seek refunds through their local stores. AAFES is still trying to get the word to customers about the overcharges, and some who are unaware of the situation may yet get stuck paying German prices for fuel.

AAFES customers are urged to check their fuel card account balances by clicking on the "Germany fuel ration card" link at the bottom of www.aafes.com.