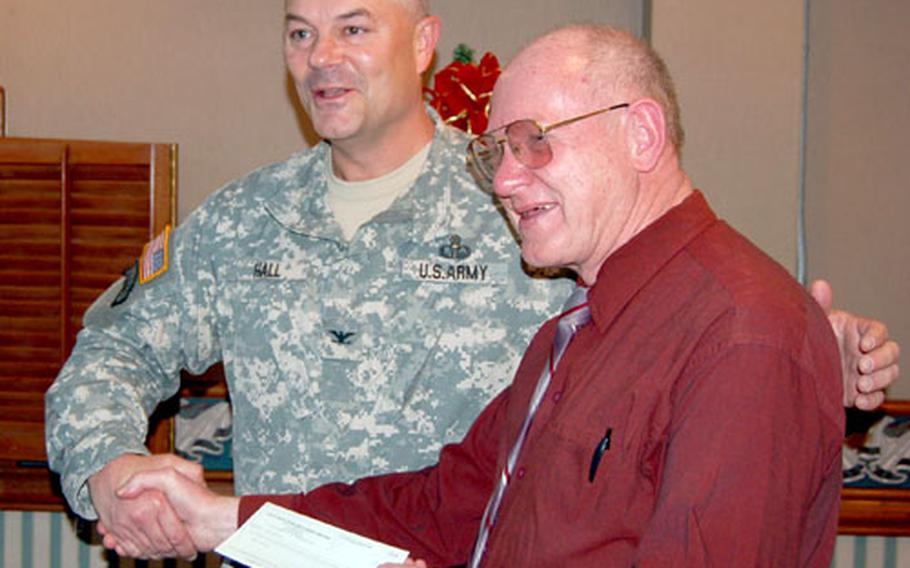 The donation, gathered from chapel offering plates on U.S. bases across the peninsula one weekend in October, was presented at Yongsan Garrison.

&#8220;I am proud of Chaplain (Lt. Col. James) King and what he&#8217;s done in recognizing the value of this,&#8221; said garrison commander Col. Dave Hall after presenting the check to Shalom House director Bill Meyers.

Shalom House is an off-post organization for Christian servicemembers that opened outside Camp Casey in 1968 at the request of the U.S. Army chaplains serving there. According to a brochure, the Shalom House &#8220;continues to support the U.S. Army Chaplain Corps and chapel programs.&#8221;

Wednesday&#8217;s donation is to be used for the Raphael Clinic, officials said.

Meyers said the money will &#8220;help people that really need the help desperately.&#8221;

The clinics began in early October and are held on alternating Saturdays. They are staffed by volunteers from Seoul National University and are equipped to treat sexually transmitted diseases and to provide prenatal care, dental care and skin care, Meyers said.

U.S. military doctors hope to volunteer at the clinics, but the South Korean government does not recognize their licenses, said Capt. Christopher Perry, a member of the Shalom House board of directors.

Perry said the 18th Medical Command is working on an agreement with Raphael Clinic to recognize U.S. military doctors as legitimate care providers. He said he&#8217;s spoken to several medical-care providers in the Camp Casey area, and they are eager to help.