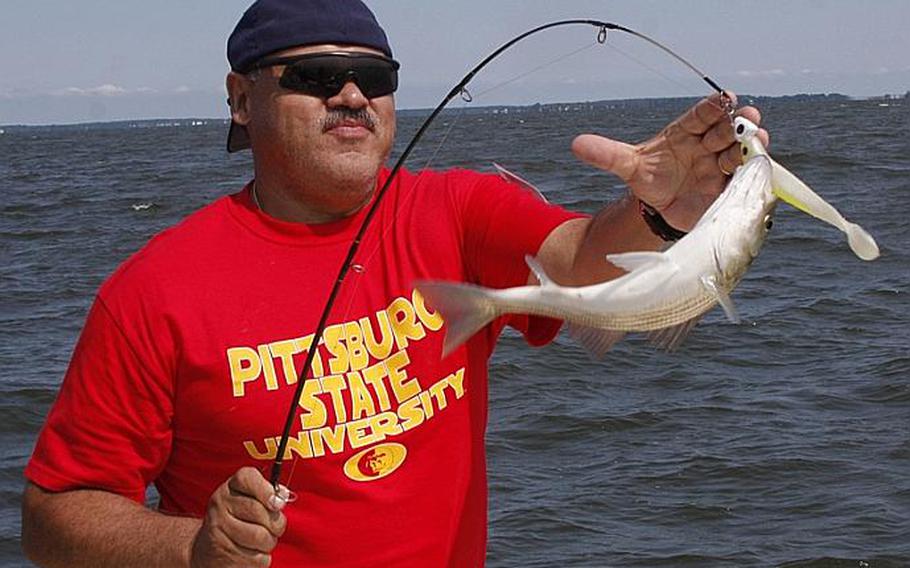 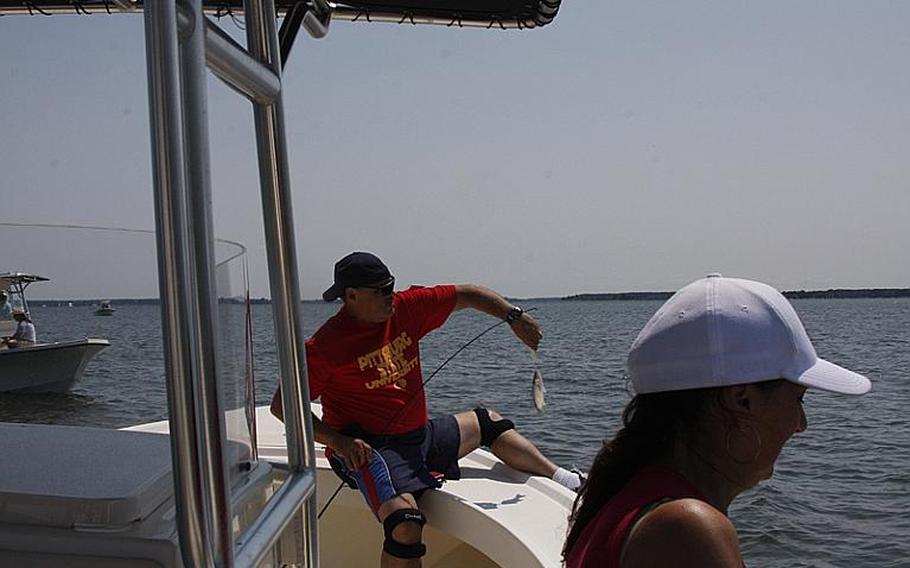 Buy Photo
Sgt. Maj. Angel "Tony" Alvarez reels in a striped bass, while his wife, Ivana, fishes off the side of the boat during last month&#39;s Stars and Stripers fishing tournament in Chester, Md., sponsored by Project Healing Waters. The group promotes fishing, usually fly fishing, as therapeutic recreation for veterans with physical and psychological wounds. (Derek Turner/Stars and Stripes) 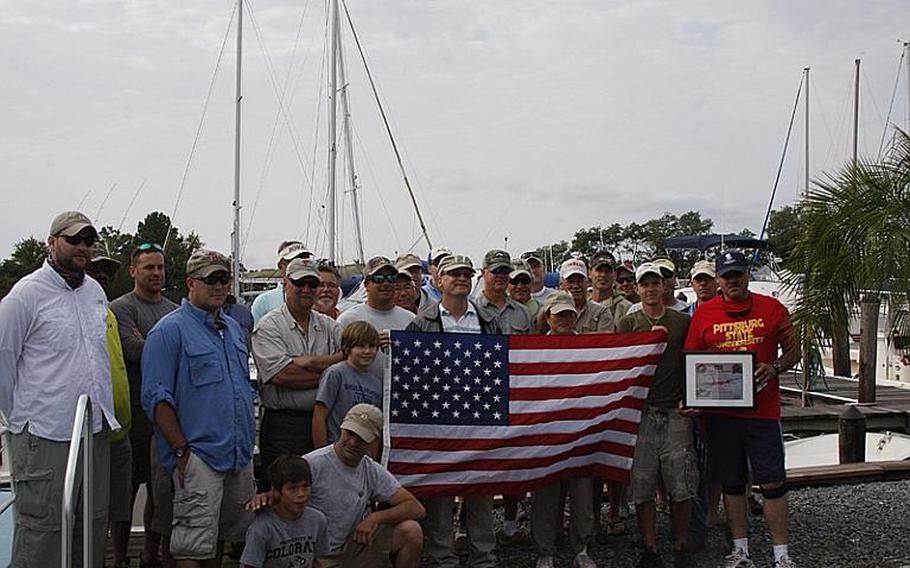 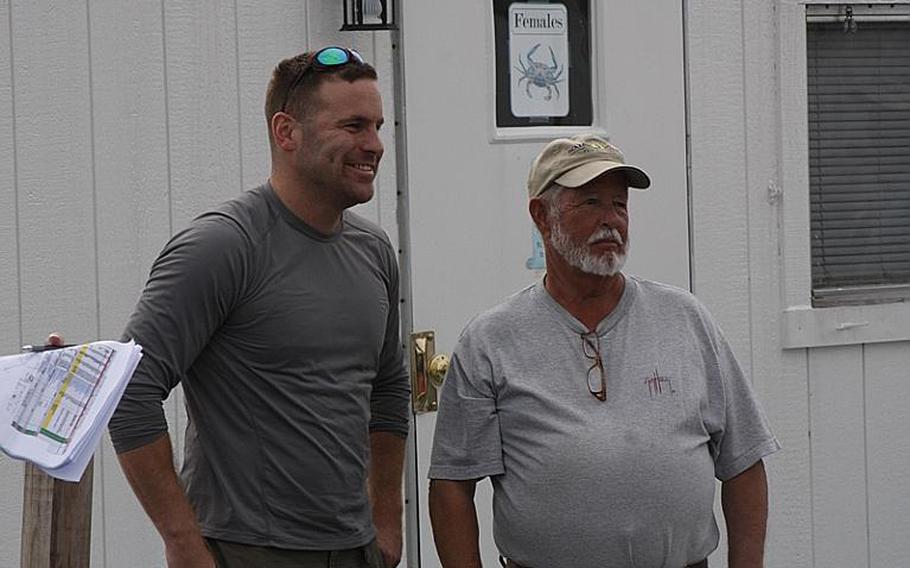 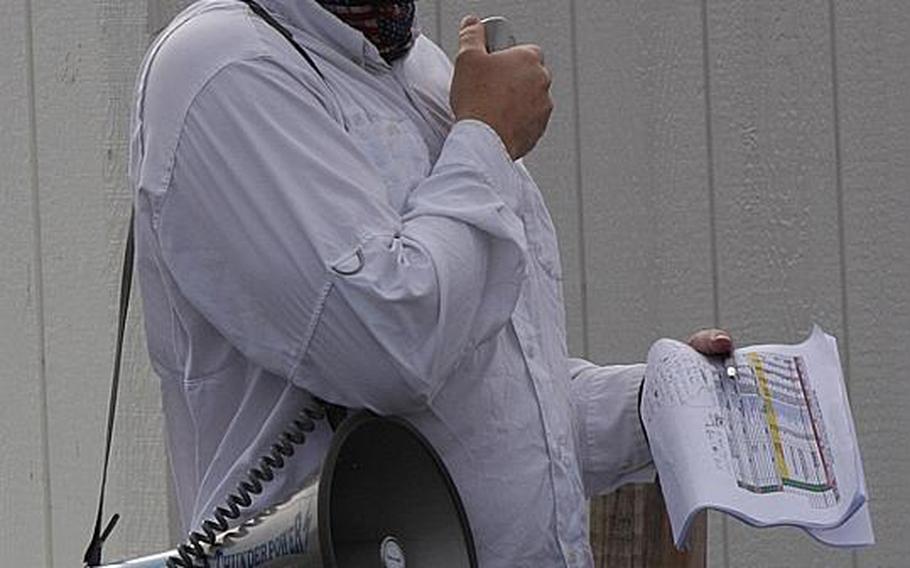 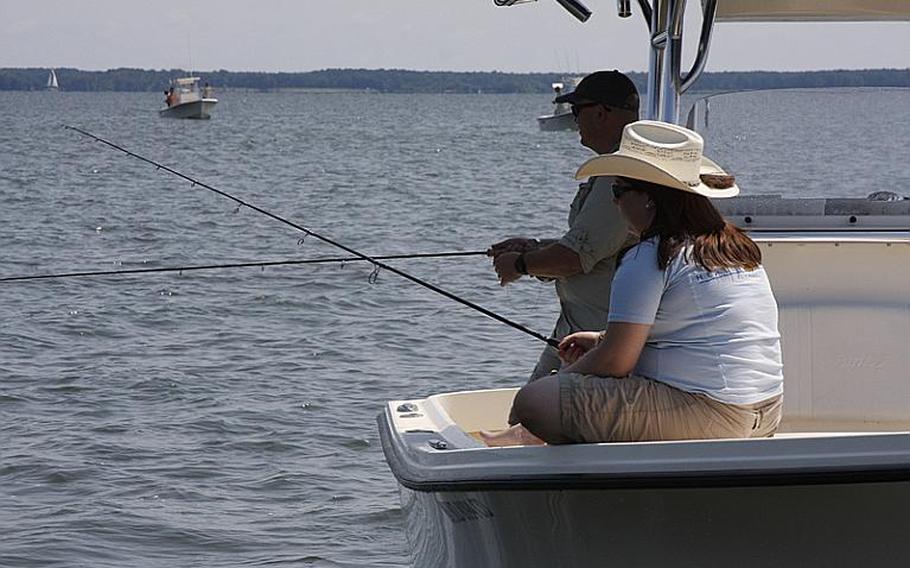 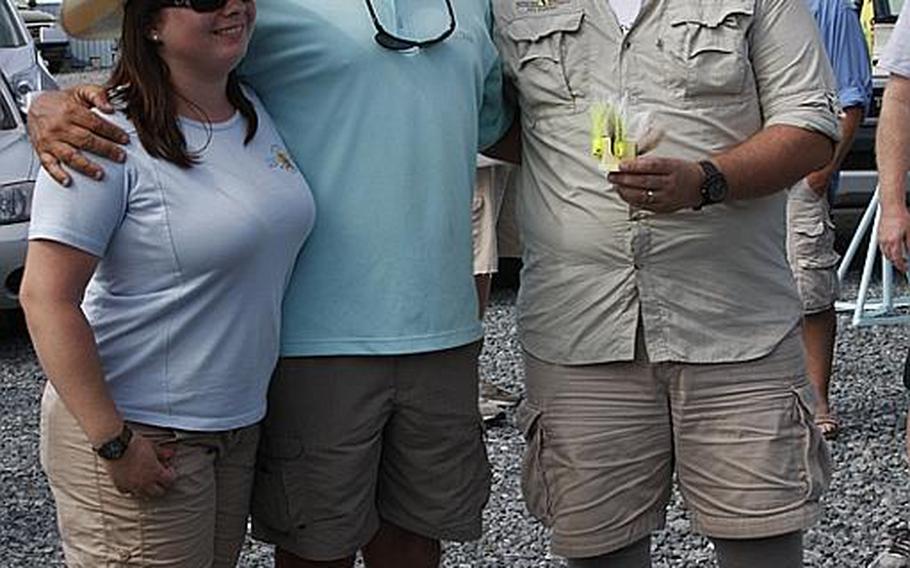 Buy Photo
Chris Frost, an Air Force veteran, and his wife, Cathy, an Army veteran, pose with their captain for the day, Richie Gaines, center, after Project Healing Waters&#39; Stars and Stripers tournament last month in Chester, Md. Gaines was one of more than a dozen local fishermen and charter captains who volunteered their boats for the event. (Derek Turner/Stars and Stripes) 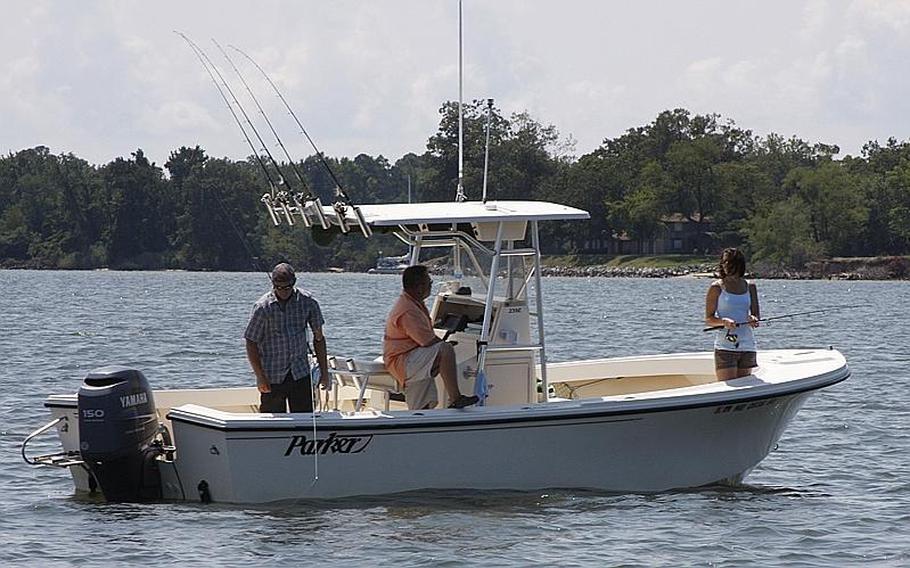 CHESTER, Md. &mdash; It&rsquo;s a little too windy, a little too choppy and the fish aren&rsquo;t biting, not even a nibble.

Tony Alvarez doesn&rsquo;t seem to mind. He casts out a line, lets his lure sink to the bottom and then slowly reels it in. He does it again and again.

He stands in the back of the boat on legs steadied by braces on each knee. His posture is straight despite years of chronic back pain. He fixes his eyes on the horizon from time to time, preemptive strikes to fortify himself against the vertigo that even on land can leave him wobbling like a drunk. He&rsquo;s been diagnosed with traumatic brain injury and post-traumatic stress disorder, but the symptoms are absent at the moment.

&ldquo;I&rsquo;ve still got a long way to go, but I&rsquo;ve come a long way,&rdquo; he said. &ldquo;Even just being on the water, for me, is relaxing.&rdquo;

That&rsquo;s the idea. The Chesapeake Bay tributaries off the eastern shore of Maryland are dotted on a recent Saturday with boats carrying nearly two dozen men and women just like him, guests of Project Healing Waters, a nonprofit organization that promotes fishing, usually fly fishing, as a means to aid the recovery of servicemembers damaged by war. Therapeutic recreation is fast gaining acceptance within the military and veterans communities. Whether it&rsquo;s fishing or rock climbing, horseback riding or snow skiing, the belief is that the outings can provide physical exercise and mental escape.

Sgt. Maj. Angel &ldquo;Tony&rdquo; Alvarez, 57, has been a wounded warrior longer than most of the others have been alive. In Vietnam, in 1972, in the middle of a firefight, an explosion sent shrapnel screaming into his leg, ending his war.

All the worst stories about the treatment of Vietnam veterans, he lived them. He said he was cursed at, spat upon, called a baby killer. He didn&rsquo;t like it one bit, but he stayed in the Army until 1985.

He eventually moved with his wife, Ivana, and their children to Cleveland, Tenn., where Alvarez was a homicide detective and an ordained minister in the Church of God. Then he got another calling, back to the Army. In 2000, after 15 years as a civilian, he put the uniform back on and went to work training military police officers.

In August 2003, more than 30 years after he was medevaced out of Vietnam, Alvarez was traveling with a group of MPs in a convoy of soft-skinned Humvees bound for the Green Zone in Baghdad when, for him, another blast ended another war.

The improvised explosive device left him with injuries to his back, shoulder, legs and face. He suffered hearing loss and vision loss, TBI and PTSD.

In the years since that day, his daily duties have been regularly interrupted by time off for medical treatment. He&rsquo;s tried just about everything to manage the pain &mdash; 21 spinal blocks, acupuncture, physical therapy, all sorts of medications.

The fishing outing is something of a celebration. A day earlier, Alvarez concluded a month at the National Intrepid Center of Excellence on the campus of Walter Reed National Military Medical Center in Bethesda. He spent most of each day going to appointments and each night retired with Ivana to their room at the Fisher House.

This spring, Alvarez was assigned to a warrior transition unit at Fort Meade, Md. He and Ivana are beginning to plan life after the military again. Days like this one remind him that things are different now.

&ldquo;There has been a tremendous mind shift in the American people in realizing the sacrifice of our servicemembers,&rdquo; he said. &ldquo;Put it this way, when we came back from Vietnam, nobody offered to take us fishing.&rdquo;

Project Healing Waters was founded in 2005 and has expanded to sponsor more than 100 outings nationwide each year. The recent event in Maryland &mdash; a tournament dubbed &ldquo;Stars and Stripers&rdquo; &mdash; included both fly fishermen and light-tackle anglers pursuing striped bass in open waters. Most often the group&rsquo;s outings are dedicated to fly fishing in trout streams and small rivers.

Folkerts is one of only a handful of full-time paid staffers, but he got his start with the group as a participant. He was newly commissioned and on his first deployment to Iraq in 2005 when an IED hit his dismounted patrol, ravaging the left side of his body. At Walter Reed, he was approached about Project Healing Waters.

&ldquo;At the time, my left hand was still paralyzed and I thought it&rsquo;d be too difficult to try and I didn&rsquo;t want to fail at something,&rdquo; said Folkerts, who was medically retired in 2008. &ldquo;They kept on bothering me to come out and try it. I did and I learned how to cast and learned how to manage a line and do what I need to do to fish. I went on my first outing and caught a fish and it was all over. I fell in love with it.&rdquo;

Dr. Tamar Martin, a rehabilitation psychologist who specializes in research into treatment of people with disabilities, including TBI and PTSD, said there has been little substantive research of the benefits of therapeutic recreation. A recent pilot study involving a group of 20 veterans and volunteers involved in fly fishing suggested that the camaraderie and the peaceful environment may offer the most rewards, she said.

&ldquo;Yes, the fly fishing is important but it&rsquo;s really the relationship building,&rdquo; said Martin, who has volunteered with Project Healing Waters since 2008. &ldquo;What they talk about is feeling better, having somebody to talk to, having resources. The relationships that start to develop because of the fly fishing then carry over on their own. ... It expands their reintegration into community life.&rdquo;

Representatives from the group team with military and veterans hospitals, as well as warrior transition units. They visit regularly, often weekly, to tutor troops and veterans in the unique skills associated with fly fishing. They want to create a continuing relationship with participants, Folkerts said, and teach them an avocation that they can fall back on when they need it.

Staff Sgt. Robert Bishop is one of the regulars. He&rsquo;s gone on nearly 10 outings with the group and on his own will schedule fly fishing trips with his wife and daughter.

His wife, Heather, usually settles in to watch from a folding chair near the water and 10-year-old Bailey stands ready with a net to bring in any fish on the end of Bishop&rsquo;s line.

It&rsquo;s a scene he couldn&rsquo;t have imagined when he came back from Afghanistan with a severe case of PTSD, prone to nightmares and angry outbursts.

&ldquo;They were living on edge,&rdquo; said Bishop, now serving with &ldquo;The Old Guard&rdquo; at Fort Myer, Va. &ldquo;They didn&rsquo;t know how to treat me. Anything they did, whether it was good or bad, was going to get the same response out of me.&rdquo;

Bishop volunteered for in-patient treatment at a Veterans Affairs hospital in Martinsburg, W.Va. It was there that he hooked up with Project Healing Waters.

&ldquo;I think I&rsquo;d just forgotten about everything that day,&rdquo; he said of his first fishing trip. &ldquo;I was just fishing. It was so simplistic and just calming that I didn&rsquo;t even know that eight hours had passed.&rdquo;

It is Alvarez&rsquo;s first time out with Project Healing Waters. Though he was already at Fort Meade, he&rsquo;s been assigned to the WTU for less than three months, four weeks of which was spent in in-patient treatment at NICOE.

It wasn&rsquo;t all bad, he said. After his first week there, his doctor gave him Botox for pain management.

&ldquo;He gave me a shot and the next day I was pain free for the first time,&rdquo; Alvarez said. &ldquo;And it took my wrinkles out.&rdquo;

He wrapped up his month at NICOE and returned to Fort Meade with just a couple hours to spare before leaving for a weekend with Project Healing Waters.

The only sound is that of the wind across the bow and whitecaps breaking on the water. Then a cellphone rings. It belongs to Bill Nieberding, the owner of the boat and one of more than a dozen local fishermen and charter captains who volunteered to take out the wounded warriors. Nieberding just got a tip, a large mass of fish not far away.

He points the boat in that direction and throttles the motor.

Within a minute after arriving, Alvarez drops his line in the water and pulls out the first striped bass.

All are smaller than 18 inches in length, which means they must be released back into the water. Short on quality, Alvarez is going for quantity.

He and his wife reel in the striped bass and just as fast as they can get the line back in the water, up comes another.

Alvarez has one leg dangling over the side of the boat when Nieberding tells them to reel in the lines, that it&rsquo;s time to head back.

&ldquo;Twenty-five,&rdquo; he tells Ivana, a smile lingering beneath his mustache. &ldquo;It&rsquo;s different, ain&rsquo;t it, from being in a hospital a whole month?&rdquo;