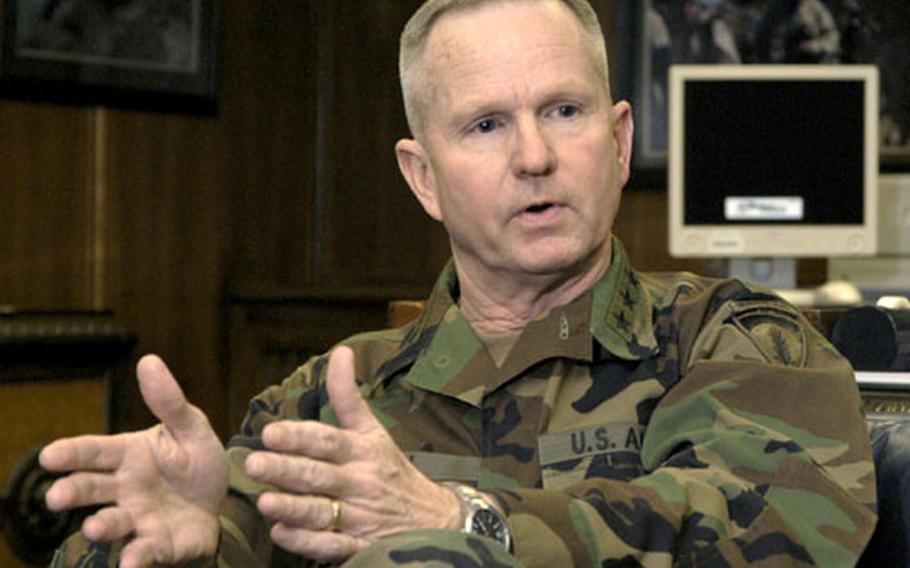 Gen. B.B. Bell, commander United States Army Europe, during an interview with Stars and Stripes in his office at Campbell Barracks in Heidelberg. (Michael Abrams / S&S)

Gen. B.B. Bell, commander United States Army Europe, during an interview with Stars and Stripes in his office at Campbell Barracks in Heidelberg. (Michael Abrams / S&S) 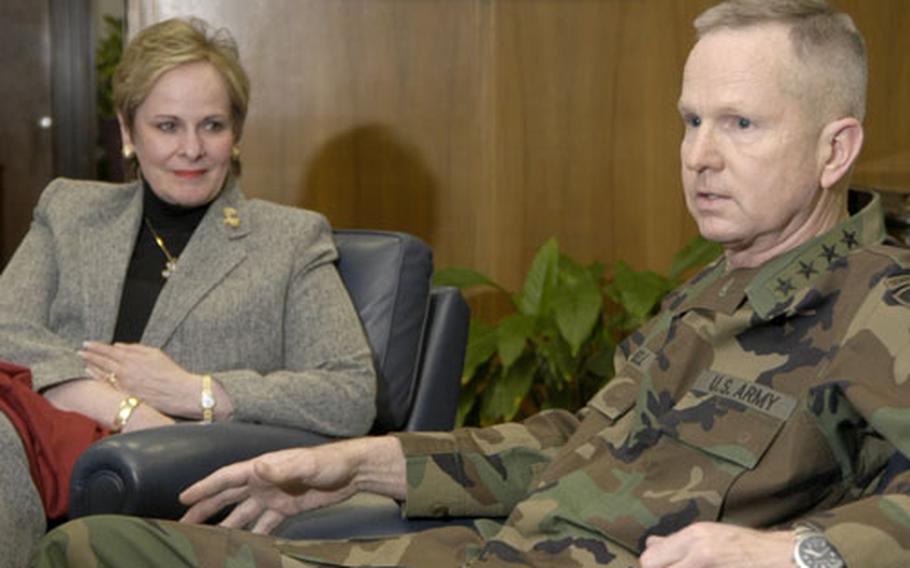 He was just one of thousands of captains then, and assigned to command the worst troop in the squadron, in an Army in the middle of a notorious post-Vietnam malaise.

In that era, enlisted soldiers smoked hashish in their barracks. &#8220;Marginally skilled&#8221; high-ranking officers spent their time &#8220;producing statistical results, fearful of personal failure ... and determined to submit acceptably optimistic reports,&#8221; according to a 1970 study by the U.S. Army War College.

From these unpromising circumstances, Capt. Burwell Baxter Bell III learned the thing that helped assure his ascent to where he is now, commanding scores of thousands as one of only 11 four-star generals in the Army of the world&#8217;s sole superpower.

Bell, known as B.B., decided that the lowly L Troop would somehow qualify more Sheridans than any other troop.

&#8220;I felt I was very good at planning things,&#8221; Bell recalled in an interview last week in his office on Campbell Barracks in Heidelberg, Germany. &#8220;But trying to get people to help you accomplish what you had planned was not my strong suit. I could not finish,&#8221; he said.

As Bell, 58, ends his three-year tenure as U.S. Army Europe commander to take up command of U.S. Forces Korea and become among the longest-serving generals in the nation, it&#8217;s interesting to note that it could have gone much differently.

In the middle of the Vietnam War, Bell was majoring in business administration at the University of Tennessee at Chattanooga. Although he was the son of an engineer who had graduated from West Point and had worked on the Manhattan Project in Oak Ridge, Tenn., Bell wasn&#8217;t all that militarily minded.

But Bell joined ROTC, and, one day, there was a ceremony with all the cadets formed up to watch one of the instructors, Maj. Parish, receive a Silver Star for heroism for combat in Vietnam.

Bell&#8217;s abilities served him well in staff and command positions over the years, but he always stood out as a commander, said retired Gen. Barry McCaffrey.

&#8220;It&#8217;s interesting. Lots of the commanders I had working for me went on to three or four stars. All of them did several things (adequately) and one or two spectacularly,&#8221; said McCaffrey, a leading character in &#8220;Prodigal Soldiers,&#8221; a book about how officers like him, former Secretary of State and former Chairman of the Joint Chiefs of Staff Colin Powell and former Army Chief of Staff Eric Shinseki, helped reform the post-Vietnam military into a disciplined, respected force.

One recent example involves the Southern European Task Force before it left Vicenza, Italy, for Afghanistan, to head up forces there.

According to the woman who knows him best, Bell&#8217;s greatest quality is honesty.

Look around his office, Katie instructs: Bell has put up no pictures of himself, no medals or awards. All the framed photographs on his walls are of his soldiers, on the job,&#8221; she said.

Bell credits his wife in helping keep him informed, and softening him.

&#8220;She has coached, taught and mentored me about my behavior,&#8221; Bell said. &#8220;She understands the human dimension better than anybody I know in the military. So her ability to remind me of the impact of decisions on the communities and the people in our ranks has been a very heartening thing.&#8221;

Shortly after the Bells arrived in Heidelberg from his former command of the III Corps in Fort Hood, Texas, the couple traveled to Landstuhl Army hospital and visited soldiers grievously injured at the beginning of the Iraq war. Katie Bell, in a letter she wrote home but which somehow ended up on the Internet, wrote that when one of them, who&#8217;d lost both his legs after stepping on a mine but still told Bell he was fine, with &#8220;nothing to complain about,&#8221; she burst into tears and left the room. By the end of the visit, she wrote, she wanted to &#8220;get home and go in my room and be by myself and thank God for these young men and women who are giving so much.&#8221;

But her husband had more to do. &#8220;B.B. collected the names and numbers of all the parents and two wives and came back and called them all,&#8221; she wrote.

At the beginning of the Persian Gulf War in 1990, Bell was a colonel &#8212; and executive officer to the war&#8217;s top general, Norman Schwarzkopf. It was the first U.S. war since Vietnam, and a remarkable time as the war began for those involved.

Schwarzkopf defended the decision to end the Gulf War within nine months, without marching on Baghdad, in a way that some could feel sounds prescient today:

In the spring of 2004, as the Iraq insurgency grew vicious, Bell stood hip-deep in the midst of worried wives. Their husbands, soldiers with the 1st Armored Division and due to return to Germany after a year in Iraq, had just been ordered to stay put for several more months. Although the Army had abruptly canceled their plans, they, in many cases, faced a bureaucracy that seemed more hostile than helpful.

One helicopter pilot&#8217;s wife had quit her counseling job in anticipation of her husband&#8217;s return and upcoming assignment elsewhere. When she learned her husband wasn&#8217;t coming back yet, she tried to get her job back. The rules prohibited it, she was told.

He traveled from base to base, encouraging and ordering people to help the families with whatever they needed, giving out his staff&#8217;s e-mails for personal attention, making sure someone followed up. Nishonda James, a staff sergeant&#8217;s wife, said at the time: &#8220;Anyone has anything bad to say about General Bell, tell them to come talk to me.&#8221;

Families are owed a special obligation when they&#8217;re waiting for their soldiers in Europe, Bell said.

Bell&#8217;s most complicated task of the past three years was designing the plan to &#8220;transform&#8221; the Army in Europe, a plan to reduce two-thirds of U.S. troops in Europe while, Bell insists, increasing war-fighting capabilities. The decision to return to the 1st Armored and Infantry divisions to the U.S. had been made; the question was how to do it.

The restructuring, although it involved scores of German communities, was primarily an American decision, and some Germans wanted more information than was forthcoming. Moreover, German public opinion has remained staunchly against the Iraq war and other war-on-terrorism-related U.S. policies.

But Detlef Junker, the founder of the University of Heidelberg&#8217;s Center for American Studies, said everybody was impressed with Bell at his transformation speech last summer at the German-American Friendship Club.

&#8220;He was for us, almost the archetype of an American commander,&#8221; Junker said. &#8220;His argument was as clear-cut, I would say, as his hairstyle. He gave short, direct answers in a determined way.

Bell&#8217;s next, and, most likely final, command, at U.S. Forces Korea, will find him again overseeing reduced and redesigned forces for the future, while facing a so-called rogue state that recently, most people believe, acquired nuclear weapons.

&#8220;Having said that, it&#8217;s my purpose to ensure we can enforce the armistice agreement and that if, for some reason, conflict were to break out, we finish it, on terms agreed to by the United States and the Republic of Korea.&#8221;