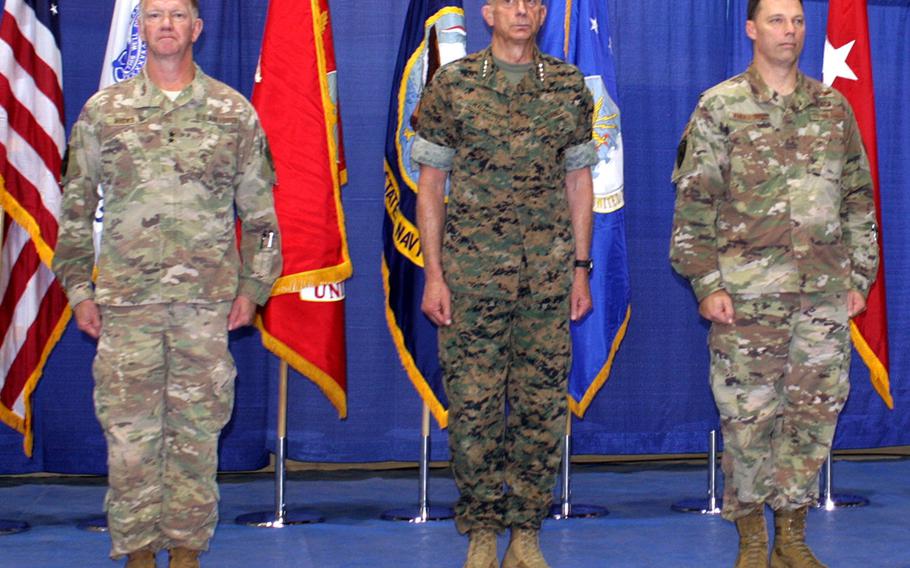 STUTTGART, Germany — Maj. Gen. Marcus Hicks, who led U.S. special operations troops in Africa during a tumultuous two-year tenure, warned during a change of command Friday that security conditions are deteriorating in Western Africa, a region where four U.S. troops were killed at the start of his time in command.

Brig. Gen. Dag Anderson, who previously served at U.S. Pacific Command, said during brief comments that he would build upon progress Hicks had made. Both are Air Force generals.

“We operate in a complex environment that is only becoming more complex,” Anderson said.

Hicks spoke through tears during the emotional ceremony at Special Operations Command Africa’s Stuttgart headquarters as he recounted the names of troops lost in combat operations.

The 2017 ambush near the Nigerien village of Tongo Tongo was a defining moment during Hicks’ command, and it happened when he was less than 90 days on the job and in the midst of an assessment of how his forces were operating on the continent.

No one saw the ambush coming, Hicks said, and the troops were “overwhelmed by a numerically superior forces that no one assessed was operating in the environment ... not our African partners, not our western partners, not our own intelligence community.”

In the incident’s aftermath, Hicks would be reprimanded by then U.S. Special Operations Command chief Gen. Tony Thomas. Numerous other lower-level officers and enlisted personnel also were reprimanded.

Hicks did not directly address the reprimands, but said he is concerned about the security environment in Western Africa, where U.S. forces have long served as advisers to local troops in countries like Chad, Burkina Faso and Niger.

The four soldiers’ deaths brought more scrutiny to missions in Africa, where SOCAFRICA has about 1,200 troops operating in nine different countries. Last year, officials said they planned to draw down U.S. troops on the continent by about 10%, largely from special operations.

U.S. Africa Command’s Gen. Thomas Waldhauser, who presided over the ceremony, said there were important achievements during Hicks’ tenure.

Hicks effectively oversaw troop level cutbacks and made the most of his stretched force “using episodic engagements to maintain relationships with countries where we could accept risk against localized threats, which did not jeopardize the security of the homeland or our allies,” Waldhauser said.

AFRICOM officials say they sometimes struggle to convey to the U.S. public the importance of military operations in Africa, which some Americans see as having little impact on the homeland.

Earlier this month, at Djibouti’s Camp Lemonnier, the only permanent U.S. base in Africa, Waldhauser and other officials discussed a proposed plan to focus the mission there on relationship-building in the region and maintaining a posture to respond to crises that may affect U.S. citizens, property or interests throughout the continent.

U.S. troops would continue efforts to build up government forces in African partner countries so they can fight militant groups and secure their countries themselves, Waldhauser told Stars and Stripes on June 12.

There are still a range of threats in Africa, Hicks said Friday, citing the Sahel region as “a rapidly deteriorating security environment.”

As the Pentagon shifts more resources to deal with other priorities, most notably countering Russia and China in a national security strategy centering on “great power competition,” Hicks said his command was operating on “the margins” and can’t handle any more reductions.

“I am recommending against further cuts,” Hicks said.

Stars and Stripes reporter Chad Garland contributed to this story.