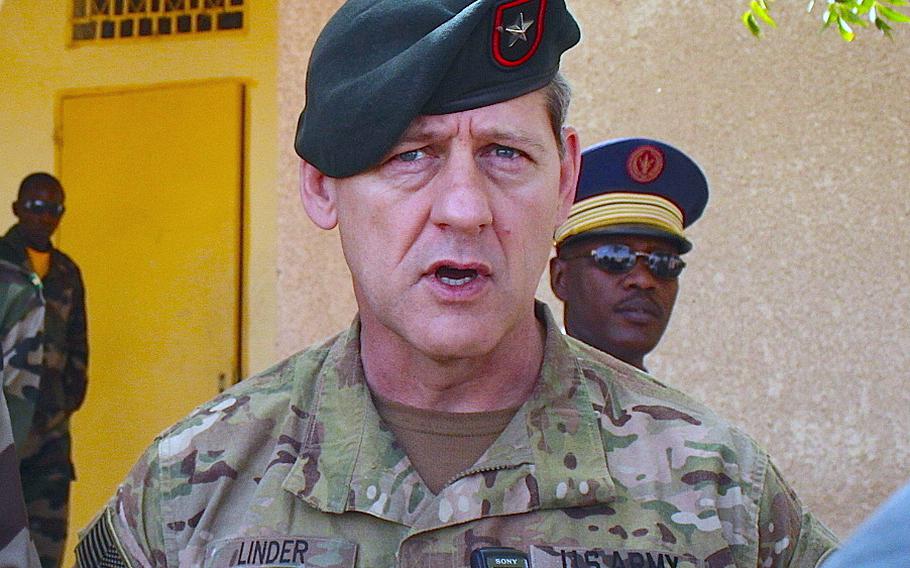 The incident occurred during a recent foot patrol in Niger by local soldiers who had been trained by American Green Berets. When a female suicide bomber failed to make it onto a bus, she tried to jump on the back of one of the Niger troops.

“But before she can do that, one of his buddies, who is a well-prepared soldier, wields around and places a well-aimed shot and immediately disables her and prevents her from detonating (her bomb),” recalled Linder, who turned over leadership of SOCAFRICA to Brig. Gen. Donald C. Bolduc during a change-of-command in Stuttgart.

“That is a true story,” Linder said, “a story of a disciplined and well-prepared African force who for the past five months have been working with a team of Green Berets, side by side.”

The change in command comes as Africa Command faces a host of security challenges on the continent. A number of militant groups now have a foothold in so-called ungoverned spaces, including Boko Haram, which operates in remote parts of Nigeria; al-Qaida-allied groups in the Sahel; and Islamic State fighters in Libya.

AFRICOM’s Gen. David Rodriguez credited Linder and his team of operators with leading the effort to assist African militaries to fight militant groups.

“Over the past few years you all have done a remarkable job in one of the most complex and challenging security environments we have faced in decades,” Rodriguez said during the ceremony. “Special operations forces are working more closely with allies and partners in Africa than ever before.”

Linder, who is headed for a new assignment at Fort Bragg, N.C., said efforts to enhance the capability of Africa’s militaries are part of a broader effort to blunt the advance of various militant groups, who seek to take advantage of ungoverned spaces.

“The enemy’s ultimate goal is to change the global order and dial back the hands of time to the year 700,” he said.

Bulduc, the incoming commander of SOCAFRICA, is already well-versed in the U.S.’s military efforts on the continent, having served for nearly two years as AFRICOM’s deputy director of operations.

In a brief speech, he said he was honored to join the team.

“I hope I will be able to earn my spot in the formation,” he said.