Outgoing sailors can earn ‘golden ticket’ back to the Navy 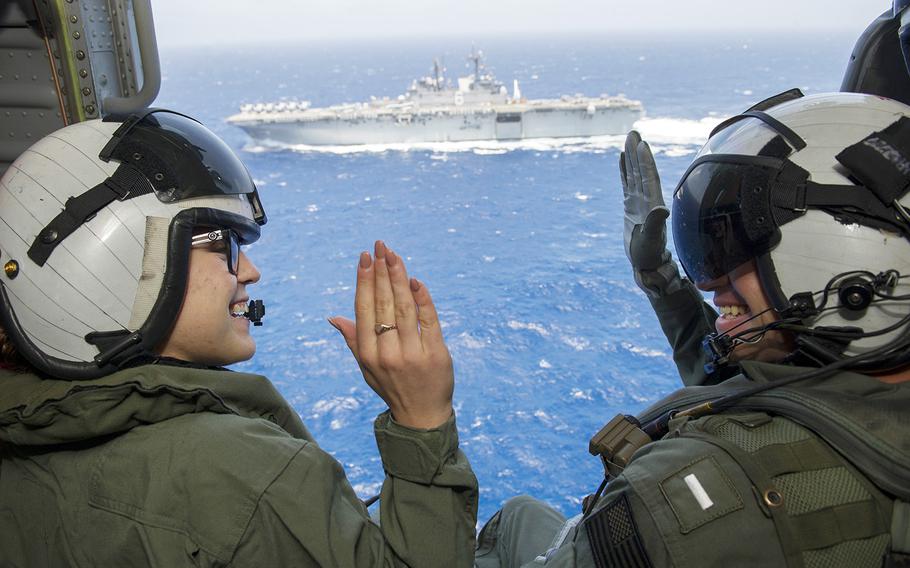 YOKOSUKA NAVAL BASE, Japan — In its latest initiative to retain sailors, the Navy on Wednesday announced an incentives program that takes a nod from Willy Wonka himself.

The Targeted Reentry Program allows commanding officers to recommend eligible outgoing sailors for “golden tickets” or “silver tickets” that would expedite their re-entry processes should they wish to re-enlist.

Golden-ticket holders could return to active duty within a year of their release, the Navy said. Those with silver tickets could get active-duty status within two years of release, depending on the Navy’s needs.

Re-enlisting sailors using the tickets will regain their most recent rate and pay grade upon return to active duty. Sailors must remain fully qualified for active duty to use their tickets.

The initiative is among about 45 the Navy is unrolling as part of its Sailor 2025 program, which aims to “more effectively recruit, develop, manage, reward and retain the force of tomorrow,” the service said.

Vice Adm. Robert Burke, chief of Naval Personnel, said the TRP should help the Navy attract and retain the best of the best.

“Talent is tough to draw in and even tougher to keep,” he said in a Navy statement. “These changes are designed to maximize opportunities for command triads to advance their best Sailors while managing community and individual rates’ health.”

The TRP program is open to O-3 and O-4 officers, as well as E-4 to E-6 enlisted sailors who have less than 14 years of active status and completed their required minimum service. Sailors also must have met character standards, passed their most recent physical fitness assessment and have superior performance noted on evaluations to be eligible for a ticket.

Those who accept a ticket will go into a minimum reserve status after leaving active duty. These sailors will not have a participation requirement, but will not be eligible for benefits such as health care or retirement points.

Seaman Robert Ikes, an aviation boatswains mate on the USS George Washington, is halfway through his five-year tour. Ikes, who is considering leaving the service after this enlistment, said life after the Navy can be difficult for some.

“It’s going to kind of be hard not having the constant paychecks, but I’m sure there’s always something out there to do,” he said.

Still, Ikes said having the “backup option” of a golden or silver ticket could be beneficial.

“It’s good because some people get out and they don’t know what’s going to happen — they could hit rock bottom,” he said. “I think it’s a good idea trying to help people to make it easier for people to come back in instead of jumping through hoops.”

Petty Officer 1st Class Robert Van, an aviation boatswains mate on the USS George Washington, said he would recommend some of his outgoing sailors for tickets.

“I think it would be great for us in the leadership side because we can say, ‘This person is an outstanding sailor,” he said. “I understand they want to get out, but I see them as a future sailor and if they want to come back, I want them in my fleet.’”

Van – who spent time in the private sector after 14 years in the service before re-enlisting – said sailors sometimes do not realize their full appreciation of the Navy until they experience civilian life.

“There is somewhat of a culture shock flipping from the Navy to the outside,” he said. “In the military, you’re used to eating, sleeping and living with these people — there’s camaraderie. On the civilian side, there’s not that same common drive.”

Van said the lack of services — such as medical, dental and housing assistance — for civilians can also be a shock to newly released sailors, sometimes inspiring them to re-enlist. He said the TRP could help bring back top sailors who otherwise would have to restart the recruitment process.

“Once you get out, you have to figure out how to get health care, find an apartment or go to school [by yourself],” Van said. “Sometimes [sailors] might think the grass is greener on the other side, but then they get out and they think, ‘man I had it made.’”

The program will become available for enlisted sailors who enter Intends to Separate status on or after April 1. Officers with pending resignation requests that have not yet been adjudicated must be dated Oct. 1 or later to be eligible, Burke said.