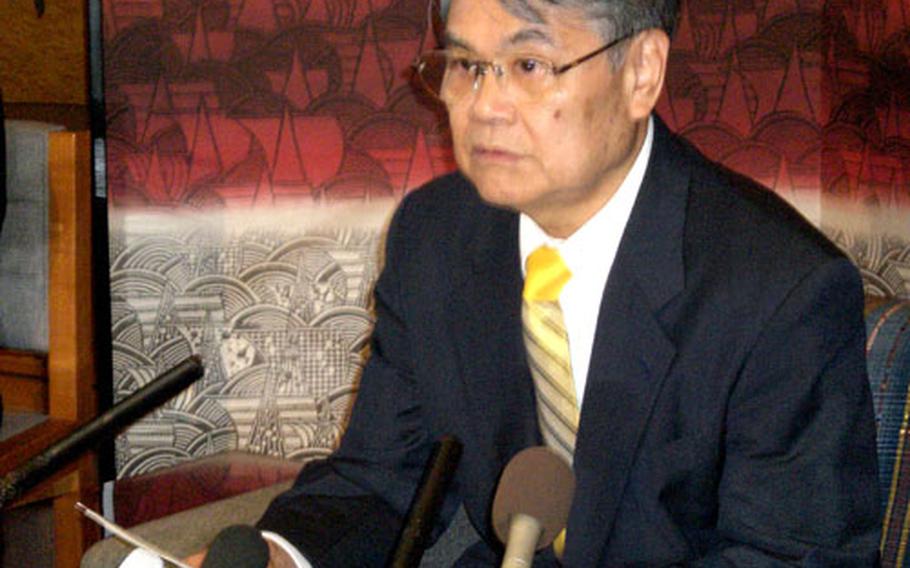 NAHA, Okinawa &#8212; The hardest decision of Keiichi Inamine&#8217;s eight-year stint as Okinawa governor, he says, was to accept a plan to build a massive Marine Corps air base off Okinawa&#8217;s northwest shore.

During a farewell news conference in the governor&#8217;s conference room in Naha on Friday, Inamine, 73, said he accepted the plan even though it went against his grain because moving Marine Corps air operations some two miles offshore near Camp Schwab would allow the closing of MCAS Futenma in urban Ginowan.

However, when Tokyo and Washington officials agreed to replace Futenma with an air facility to be built on Camp Schwab, Inamine also opposed that. He demanded that Tokyo stick with the original plan.

Inamine first won election in 1998 by defeating incumbent Gov. Masahide Ota, who adamantly opposed the offshore base. Inamine reluctantly accepted the project on the condition the new airport be used jointly by civilian aircraft and that its use by the military be limited to 15 years.

He said moving Marine Corps air operations to elsewhere on Okinawa always has been controversial.

Hirokazu Nakaima, a former vice governor and business executive, takes office Sunday. He also does not fully support the new plan, which calls for building an airstrip on the lower part of Camp Schwab and on Oura Bay landfill.

His decision to back the original plan was difficult, he said, because he had to weigh local issues against matters of national defense and because of the &#8220;not in my backyard&#8221; attitude of people on Japan&#8217;s mainland.

Inamine likened Okinawa to a dormant volcano, saying, &#8220;You are unaware of standing on a volcanic island until it becomes active, but the moving magma is always underneath.

&#8220;That is the sentiment of Okinawan people. Whoever deals with the military issue here must always be sensitive to that.&#8221;

He described his eight years in office as &#8220;a continuation of that painful moment&#8221; when he decided to accept moving the air base within Okinawa.