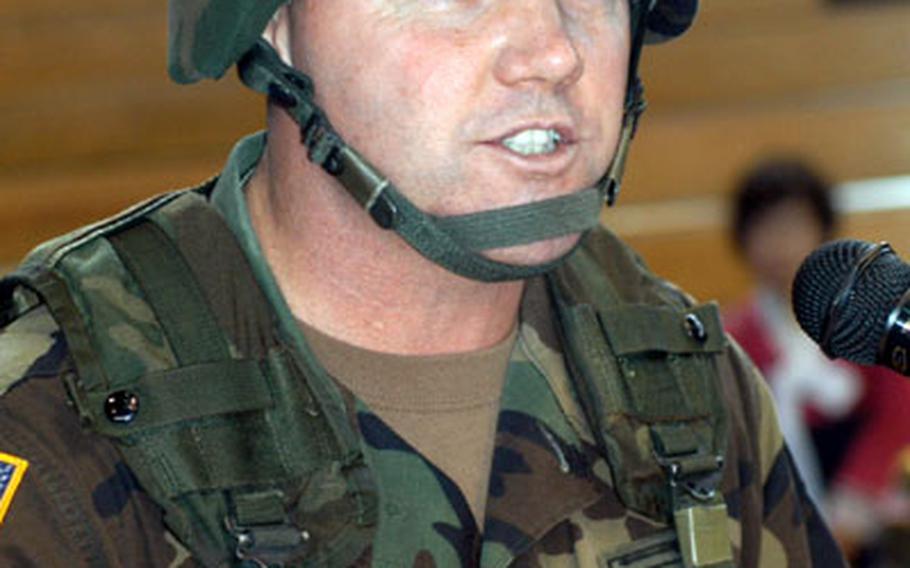 CAMP CASEY, South Korea &#8212; About $3 million in improvements in the next year will transform this facility into a &#8220;flagship&#8221; Army installation, said the outgoing Camp Casey Garrison commander.

Lt. Col. Stephen E. Murray, who handed command of the garrison to Lt. Col. Terry D. Hodges on Wednesday, said new projects in the next year include construction of an in-line skating track, a radio-controlled car racing track, a $500,000 renovation of Primo&#8217;s Restaurant, creation of a park next to Primo&#8217;s and extension of the Camp Hovey gymnasium to make more room for aerobics and weights.

The funding also is to pay for an artificial field next to the Carey Fitness Center to serve as a venue for all-weather events, he said.

&#8220;You can never seem to grow grass on that field because the soldiers play so much sport on it. The idea is to have one field where we are not dealing with mud,&#8221; Murray said.

Many improvements planned for Camp Casey in the next year may not be obvious, Murray said.

&#8220;We are going to see a lot of renovated barracks to make sure air conditioning, plumbing and heating work and the core of the building receives an appropriate face lift. You won&#8217;t notice it in the exterior, but when a soldier wants hot water it will be on, the air conditioning won&#8217;t go out and there won&#8217;t be sewage seeping up from the plumbing,&#8221; he said.

The improvements are part of the Installation Management Agency (IMA) plan to standardize installations across the Army, he said.

&#8220;Our installations are our flagships. This is where our soldiers live and train and work, and when you are forward deployed in South Korea, it is their home. The Army is committed to making Camp Casey a flagship installation,&#8221; Murray said.

In the past two years, there has been a shortage of funding for improvements at the base, he said.

&#8220;Funding for the global war on terrorism has meant installations have not got the money the Army said they would. We have been really constrained in the past two years,&#8221; he said.

Since August, thousands of soldiers from the garrison have deployed to Iraq, and U.S. forces left camps Greaves, Garry Owen, Giant, Stanton, Howze and Edwards in the Western Corridor, he said.

At Camp Casey, Murray oversaw improvements to the base water treatment and electricity plants and the opening of a family assistance center to support the deployed troops, said Christiansen, who also finishes his tour to South Korea this week.