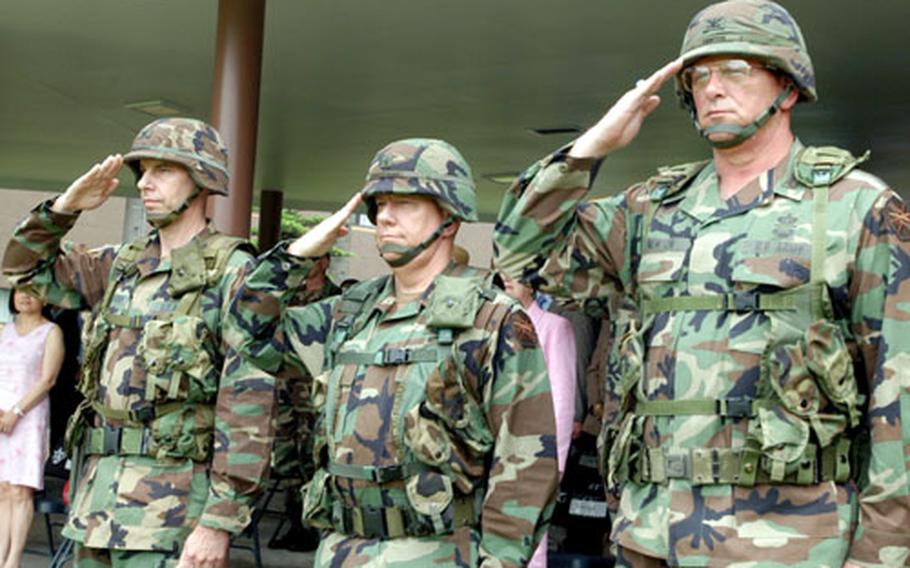 CAMP RED CLOUD, South Korea &#8212; Looking after South Korean base workers likely to lose their jobs with the closure of more U.S. bases in Area I will be a major challenge in coming years, the outgoing Area I commander said.

Col. Jeffrey T. Christiansen, who handed command of Area I Support Activity to Col. Forrest R. Newton on Thursday, said several more U.S. installations would close in Area I in the next few years.

U.S. forces left Western Corridor camps including Greaves, Garry Owen, Giant, Stanton, Howze and Edwards in 2004 and Page and LaGuardia this year. Camps Falling Water, Nimble and Sears also will be vacated this year, the Army has stated.

And the U.S. and South Korean governments have agreed to eventually move all U.S. forces south of Seoul.

Christiansen said more than 900 South Korean employees received &#8220;reduction-in-force&#8221; notices when the Western Corridor bases closed but that all wanting other jobs were given them on other U.S. bases.

The challenge, he said, would be giving all of the more than 2,000 South Korean civilian employees who still work for the U.S. Army in Area I jobs that let them continue to support the U.S.-Republic of Korea alliance.

&#8220;We have a great civilian work force,&#8221; many of them serving the U.S. Army for more than 20 years, he said. &#8220;They work in every aspect of installation management, from resource management to Morale, Welfare and Recreation and personnel management. &#8230; Their work directly contributes to the readiness of the 2nd Infantry Division.&#8221;

Area I has undergone massive change since he assumed command, Christiansen said.

&#8220;Three years ago, we didn&#8217;t have Internet access for soldiers in barracks. The PX (post exchange) at Camp Stanley was a Quonset hut. There was no commissary at Camp Red Cloud and the security measures at the base consisted of a chain-link fence,&#8221; he said. &#8220;Fifty percent of senior NCOs were living in substandard housing.&#8221;

Today, soldiers in Area I can purchase in-room broadband Internet service, Camp Stanley has a brand new PX and Camp Red Cloud has several new blocks of barracks and a concrete fence around its perimeter.

The last few years in Area I were, he said, &#8220;the most challenging period I have witnessed in my entire career.&#8221; Area I staff helped the 2nd Brigade Combat Team&#8217;s 2004 deployment to Iraq and closed the Western Corridor, renovated other bases and interacted with the local community, he said.

Incoming Area I commander Newton said he expected the next few years to be a time of change.