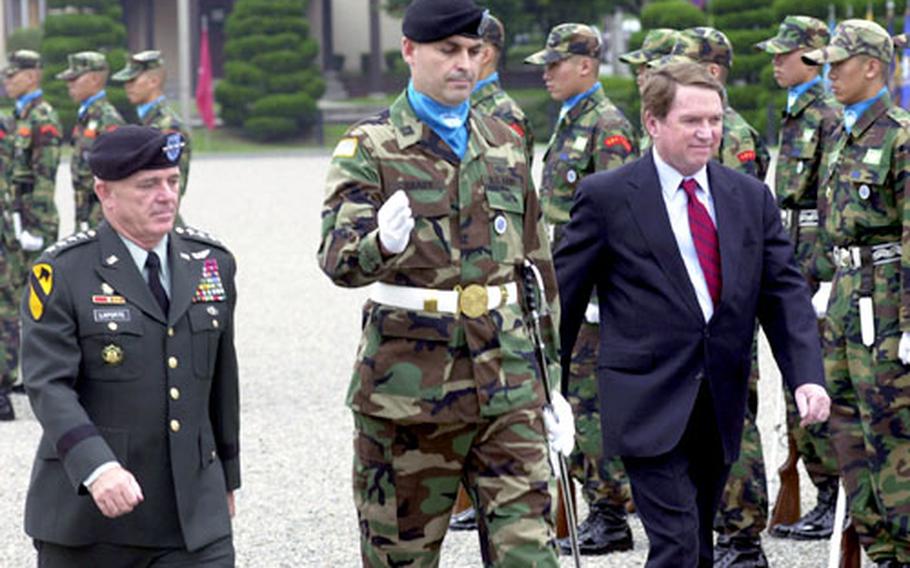 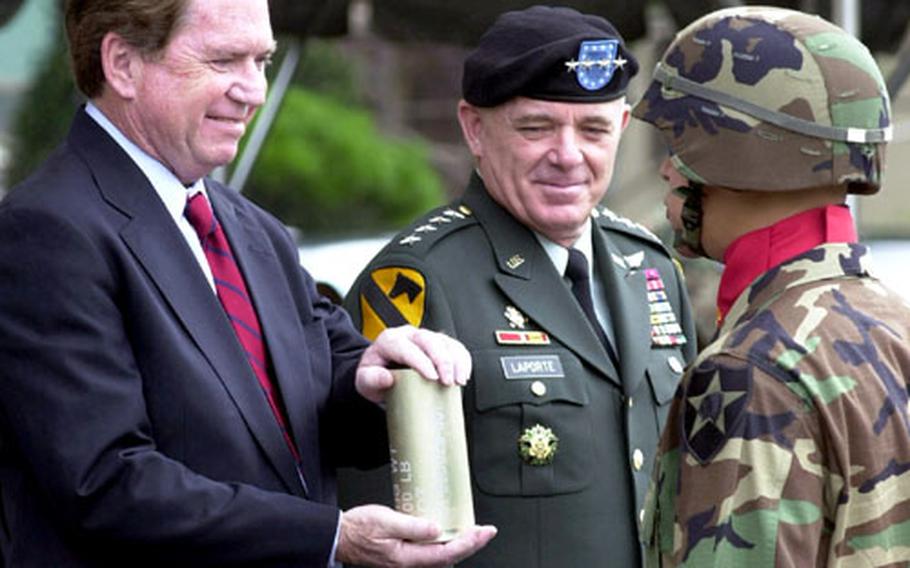 &#8220;As I reflect on my three years here, I am struck by how much has been actually done to strengthen the ROK-U.S. alliance to build upon the legacy of our 50-year-old friendship,&#8221; he said.

Hubbard&#8217;s tenure didn&#8217;t start on an easy note. He arrived Sept. 11, 2001, the effectual beginning of the war on terror with massive U.S. military campaigns in Afghanistan that fall and Iraq beginning in March 2003. During those operations, the United States has actively sought South Korean military support, resulting in anti- American protests and complaints of strong-arm American policy.

Opposition remains to a South Korean troop dispatch to Iraq, heightened by the beheading last month of a 33-year-old South Korean man working in Iraq as a contractor for the U.S. military. But Hubbard said the alliance remains strong, and South Korea&#8217;s &#8220;courageous decision&#8221; to help rebuild Iraq is an unmistakable signal of the country&#8217;s commitment to democracy.

On the home front, Hubbard smoothed the gears with a country that vacillated between contempt for U.S. policy and a desire to mend fences amid an ongoing nuclear crisis with North Korea.

Hubbard &#8212; a career diplomat &#8212; was part of a 1994 U.S. negotiating team that sought to give North Korea two power-producing nuclear reactors in exchange for a freeze and dismantlement of its nuclear weapons program. But in October 2002, according to U.S. officials, North Korea admitted to secret work on its nuclear program in abrogation of the 1994 agreement.

The Bush administration policy has called for complete, verifiable dismantlement of North Korea&#8217;s nuclear program before incentives. So far, North Korea has rejected the offer, calling it a &#8220;sham.&#8221;

During Hubbard&#8217;s time, the U.S. military also announced plans to fund $11 billion in defense improvements but also cut troops by the end of 2005.

The United States has worked on transferring some military missions to South Korea. The two countries continue to fine-tune agreements to move military forces out of Seoul and consolidate 2nd Infantry Division bases near the Demilitarized Zone, he said.

The effort is designed to make U.S. forces as &#8220;unobtrusive&#8221; as possible, Hubbard said. While the number and locations of troops may change, there should be no doubt about the U.S. commitment to the alliance, he said.

&#8220;I assure you the climate of freedom has never been stronger here in Korea because of the contributions made by Ambassador and Mrs. Hubbard, and we thank you,&#8221; LaPorte said. &#8220;Katchi kapshida.&#8221;

Christopher Hill, U.S. ambassador to Poland, will replace Hubbard in mid-August. Hubbard will return to Washington D.C. and join a private law firm.