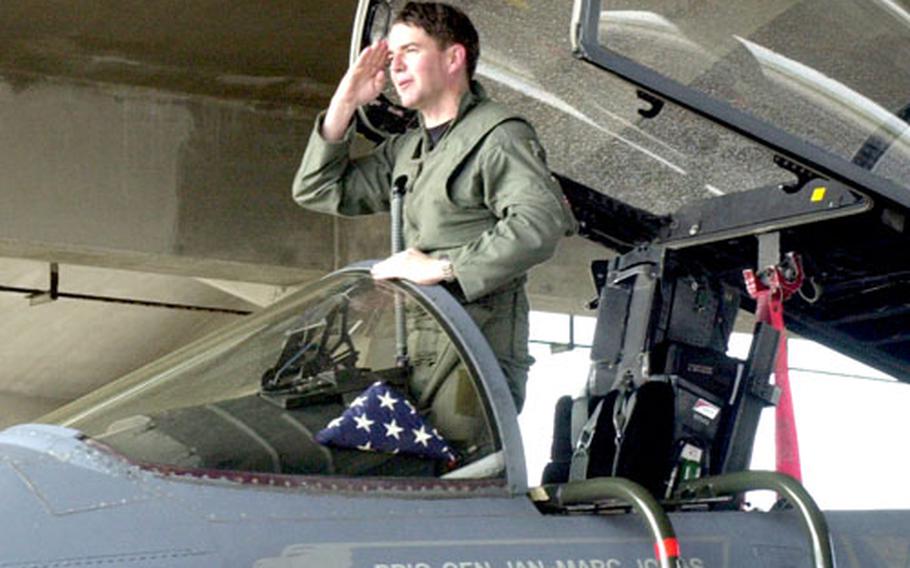 Brig. Gen. Jan-Marc Jouas salutes from an F-15 before his final flight from as commander of the 18th Wing on Thursday at Kadena Air Base, Okinawa. (Erik Slavin / S&S)

Brig. Gen. Jan-Marc Jouas salutes from an F-15 before his final flight from as commander of the 18th Wing on Thursday at Kadena Air Base, Okinawa. (Erik Slavin / S&S) 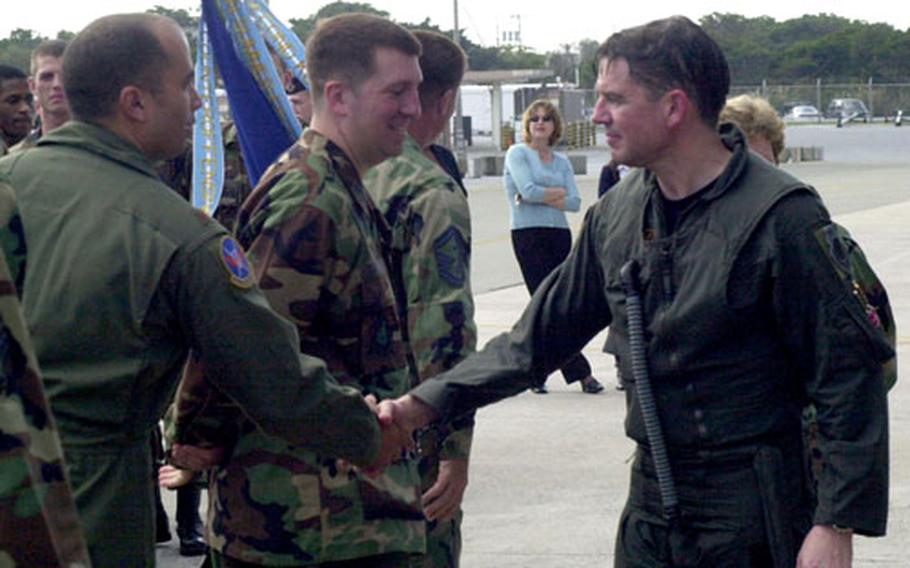 KADENA AIR BASE, Okinawa &#8212; One last flight. One last glimpse through the cockpit of a plane that flies more than twice the speed of sound.

One last hour among the 3,000 that Brig. Gen. Jan-Marc Jouas has flown over at least three continents, in peace and combat.

&#8220;The Air Force stopped paying me for how well I fly an airplane a long time ago,&#8221; the outgoing 18th Wing commander said a week before his last flight on Thursday. Still, Jouas says all he&#8217;s ever wanted to do was serve his country and fly.

He rarely has been far from a fighter wing during his 27-year Air Force career.

That was expected to change Saturday, when he was to leave Kadena Air Base for his next assignment, as vice commander of the Air Intelligence Agency, Air Combat Command at Lackland Air Force Base in San Antonio.

He said he looks forward to the challenge but acknowledged bittersweet feelings. &#8220;The best job in the Air Force is to be an operational wing commander,&#8221; he said.

Jouas was a fighter wing commander at Eielson Air Force Base in Alaska as a colonel in 2002. The job prepared him for the move to Kadena in June 2004.

However, Kadena&#8217;s size and scope, along with the intense local politics surrounding the base gates, made this command a whole different challenge.

Jouas acknowledged Moulton&#8217;s priorities may differ from his own but encouraged him to keep close ties with Okinawan officials.

Those ties were sorely tested in July, when a staff sergeant molested a 10-year-old girl not far from Gate 2 Street, and again last week, after an F-15 crashed in an ocean training zone 60-some miles from Okinawa.

After the crash, Okinawa City called an emergency meeting and issued a formal protest. Kadena Town&#8217;s mayor spoke out publicly against resuming flights. He did not return calls last week for comment regarding Jouas&#8217; tenure.

Jouas said the wing&#8217;s commitment to its Japanese treaty obligations comes first. And although the F-15 crash required safety investigations, he considers fighter readiness one the base&#8217;s top accomplishments during his watch.

&#8220;About a year ago, we saw a slide in readiness, in terms of mission capability,&#8221; Jouas said. &#8220;The fleet is at a much higher level of readiness than it was even seven or eight months ago&#8221; &#8212; improvements he credits to changes in operations and maintenance.

Jouas sidestepped claiming any personal accomplishments during his tenure, instead crediting them to the wing. He says he is proud of the wing&#8217;s response during 2005&#8217;s South Asia tsunami disaster and its record deployments to the Horn of Africa, Iraq and Afghanistan.

What does it take to get to the top?

So you want to make general?

Thousands of Air Force officers put in long hours on the job but only 273 can call themselves generals. What does it take to get there?

Most will tell you that it is a combination of the right assignments, hard work and some luck along the way.

Brig. Gen. Jan-Marc Jouas says he never expected to be promoted so high. Jouas admitted he thinks &#8220;all the time&#8221; about why he made it up the ranks while other gifted officers he has flown with didn&#8217;t.

At the same time, Jouas also is a believer in making one&#8217;s own luck.

Going to weapons school as a 28-year-old captain was his first real springboard to promotion, Jouas said. At that level, he excelled enough to propel himself above the rest of the crop.

Getting that leg up is even more difficult today. There were 24,224 Air Force captains as of November 2005, according to the Defense Department.

At the field grade level, Jouas cited gaining a squadron command and excelling there as crucial to his career path.

&#8220;Taking care of your people and your mission, and how your boss views your ability to do those things, are the most important things,&#8221; he said.