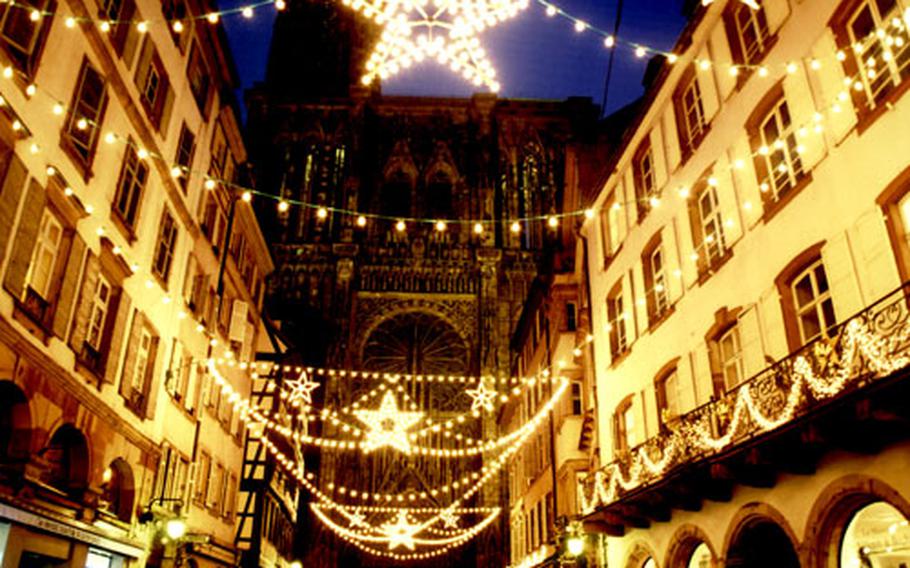 Fairy-light stars adorn the Rue Mercière that leads toward the illuminated west facade of the Gothic cathedral at the December 2003 Christmas market in Strasbourg, France. This year, Outdoor Recreation in Baumholder, Germany, is increasing the number of getaways, including one to the famous Strasbourg Christmas market, to help families keep occupied while loved ones are deployed. (Andrew Cowin / Special to S&S)

Fairy-light stars adorn the Rue Mercière that leads toward the illuminated west facade of the Gothic cathedral at the December 2003 Christmas market in Strasbourg, France. This year, Outdoor Recreation in Baumholder, Germany, is increasing the number of getaways, including one to the famous Strasbourg Christmas market, to help families keep occupied while loved ones are deployed. (Andrew Cowin / Special to S&S) 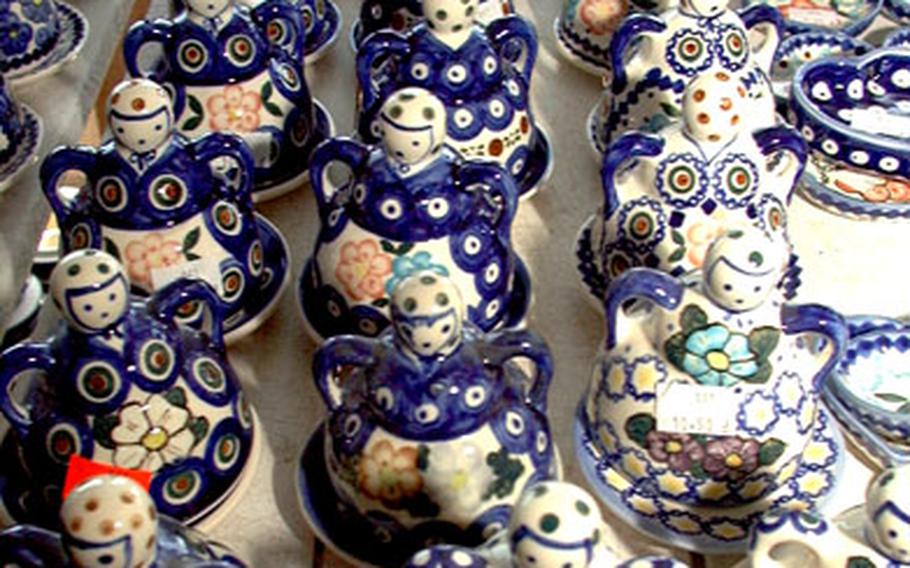 On Outdoor Recreation trips to Poland, you may find a traditional pottery piece called “The Cheese Lady,” a covered dish for preserving this dairy staple in the European diet. (S&S photo) 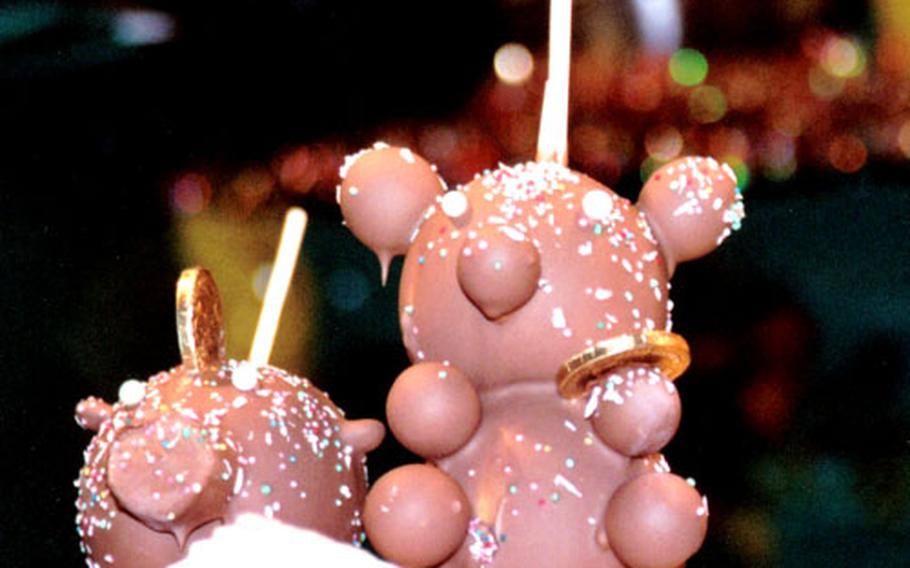 Treats like these apples covered with chocolate and shaped like little bears can be found on Outdoor Rec-sponsored trips to the Christmas market in Trier, Germany. (Lori Ann Martin / Special to S&S)

BAUMHOLDER, Germany &#8212; Just as many 1st Armored Division soldiers in Baumholder begin a second yearlong deployment, Outdoor Recreation is dramatically increasing the number of getaways, programs and retail services for those staying behind.

Outdoor Rec officials are intent on providing overwhelming motivation not to sit on base and mope, said Graf Werner, Outdoor Rec director.

&#8220;There&#8217;s no reason for people to be bored,&#8221; Werner said, considering Baumholder is less than a day&#8217;s drive to every major destination from Paris to ski centers in Austria and Switzerland.

Outdoor Rec workers are in the process of consolidating services at the defunct Shooter&#8217;s nightclub.

The goal is to create one-stop shopping. Trip planning, as well as camping, skiing and rappelling equipment, will be at the same place as Baumholder&#8217;s hunting and sport-shooting facilities, Werner said.

The changes come as 70 percent of 1st Armored Division troops at Baumholder under the 2nd Brigade and Division Artillery, are deployed to Kuwait, though base officials say the timing is a coincidence, not a deployment initiative.

To juice demand, Outdoor Rec is offering new programs and trips including a beginner&#8217;s class for young skiers that will run &#8212; weather permitting &#8212; from Dec. 22 through March.

Twice each week, the program will take novices to Erbskopf, a small ski facility about 30 miles from Baumholder in the Palatinate hills outside Birkenfeld. Just how the classes play out depends on the weather, and the program may get stretched out or condensed depending on snowfall, Werner said.

The fee is $185 per child including a graduation trip to the more challenging slopes in the Black Forest, which are as long as three kilometers, he said.

Skiing in Interlaken, Switzerland Dec. 9-11, three days for $175 per person, not including lift tickets. Most ski packages include transportation, lodging, lift tickets, ski rentals and breakfast, except Switzerland, where each person has to buy their own lift tickets.To Strasbourg, France, and Trier, R&#252;desheim and Rothenberg ob der Taubern, Germany, for the Christmas markets.Pottery shopping in Poland, which Werner points out, is still a bargain center since it&#8217;s not yet on the Euro.Centro Mall near D&#252;sseldorf, Germany&#8217;s only American-style mall.All trips except the Polish pottery trip are children friendly, Werner said.

Last April, he put together a trip for a group of New York National Guardsmen on temporary duty in Kaiserslautern, Werner said. The two-day trip included Black Forest water falls, a brewery tour and a Rhine River cruise.

In an informal poll of about 20 Americans, including many at Baumholder&#8217;s Christmas Market, most were familiar with Outdoor trips, and with Werner himself.

There should be a variety of ways to publicize trips, said Angel Vensor, a former Family Readiness Group leader for 4th Battalion, 27th Field Artillery.

BAUMHOLDER, Germany &#8212; Over the next month, Outdoor Recreation will be moving from the Rolling Hills Athletic Club to the defunct Shooter&#8217;s club on the south edge of the main base, H.D. Smith Barracks.

The club closed last month after the contractor left, said Graf Werner, head of the Outdoor Rec program. However, the Rod and Gun Club, which shared the nightclub facility, is staying put, and contractors are in the process of converting the complex into a combined Outdoor Rec and Rod and Gun Club headquarters.

In addition to a pro-shop and Outdoor Rec offices, the new facility will include a new full scale outdoor specialty shop carrying everything from rappelling equipment to special forces-type accessories for M-4s and M-16s, to hunting and camping gear, said Werner and Brandt Gardner, head of the Rod and Gun Club, hunter and liaison to German outdoors groups.

The shop, which has about 800 square feet, will be the first in the area; the nearest specialty store about 60 miles northeast in Bad Kreuznach, Gardner and Werner said over the din of German workers hammering and shuffling painting equipment.

The move meshes well with the Rod and Gun services, which Gardner said he&#8217;s hoping to expand. Right outside the door of the new facility is the trap and skeet shooting range, where marksmen gather each weekend to shoot clay disks that simulate dove, rabbit and other game.

Gun Club members are hoping to recruit more women shooters for a mixed sporting clays team that would compete against other gun clubs at bases in Great Britain and Europe, Gardner said.

MWR will rent out the actual nightclub part of the complex for private parties, with four or five Christmas parties already booked, Werner said.