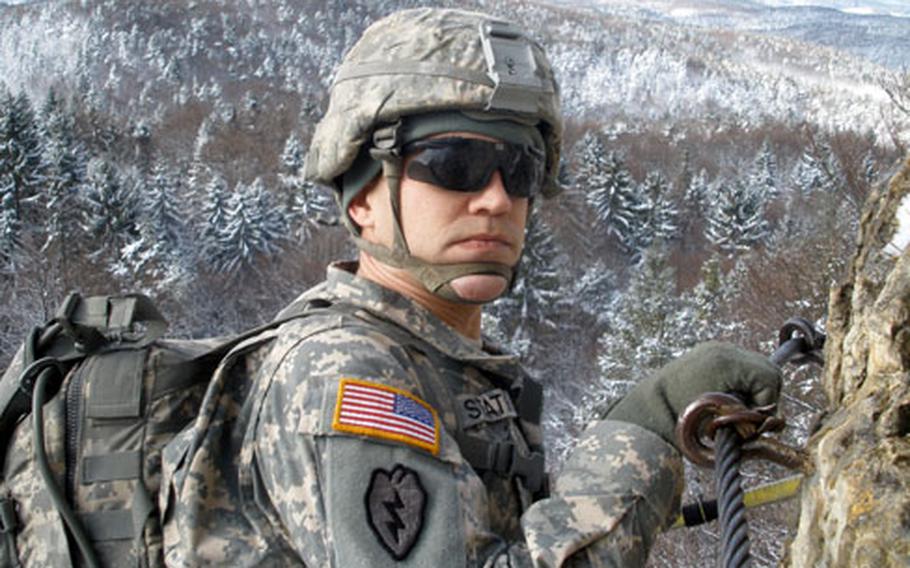 Sgt. Jason Staton, 30, of Cedar Rapids, Iowa, wasn&#39;t fazed by the altitude during a rock-climbing trip that was part of Warrior Adventure Quest. For more photos, see the link at the top of the story. (Seth Robson / S&S)

VILSECK, Germany &#8212; A few months ago, they were sweating in the heat of Iraq. On Thursday, seven young 2nd Stryker Cavalry Regiment soldiers clung to an icy cliff face in southern Germany.

The members of Lightning Troop were doing a Klettersteig &#8212; climbing with the help of a safety cable &#8212; as part of Warrior Adventure Quest, a program that uses outdoor recreation to help soldiers deal with post-deployment stress.

Recently returned soldiers all over Europe, including more than 3,500 members of 2nd Cav, are doing activities such as rock climbing, scuba diving, cross country skiing, high ropes courses and mountain biking as part of the program.

Geoffrey Farrell, an outdoor education specialist with the Grafenw&#246;hr Outdoor Recreation Center, said the activities incorporate "Battlemind" briefings that describe combat-related mental health problems and teach soldiers when they should seek support for themselves or for their buddies.

The idea is to expose soldiers to somewhat stressful events, pushing them to their limits in a safe environment, and then talk about strategies for dealing with that stress, using their reactions to the activities as examples, he said.

Thursday&#8217;s Klettersteig started with a milelong hike through a Bavarian forest in knee-deep snow.

After a short safety briefing the soldiers donned harnesses, clipped onto a cable and began to traverse a steep cliff face. Steel spikes hammered into the mountain offered sure footing in places but, at other times, the troops struggled to grip snow-covered rocks with their combat boots.

It wasn&#8217;t long before Peace appreciated his safety harness even more. As he attempted to negotiate a difficult face, his boots slipped on the ice and he plummeted toward rocks below.

"The slip almost stopped my heart," he said after the harness arrested his fall.

Several hours later the group trudged to a warm guest house in the valley for a hot meal and a debriefing session.

"What was the point of this? Why did we come out here?" asked L Troop commander Capt. Adrian Massey, 29, of Detroit.

"Just to get out of everyday office work for the day ... something different," answered Staff Sgt. Reynaldo Jimenez, 35, of Fresno, Calif.

"That was a small piece of it," Massey said. "The other piece was to do a debrief from deployment. You guys experienced some difficult challenges up there (on the mountain). Downrange you felt like you were pushed to the limit at some point. This is to simulate that in a noncombat scenario."

In Iraq, L Troop provided the regiment&#8217;s signals services. No members of the unit were killed or wounded in action during the mission but the job was stressful and involved long hours setting up computer and telephone networks, Massey said.

Farrell told the soldiers to think about the transition from combat to life at home.

In the same way they recognized risks when they were clinging to the cliff face, the soldiers should recognize risky behavior in every day life, he said.

"You are allowed to step back (from unsafe situations). It is not like you are facing a machine gun nest or have to get the (communications) node set up. You don&#8217;t have to get behind the wheel and drive 1,000 miles an hour, or race around on a motorcycle or drink until your face falls off," he said.

He added that the Army is not saying: "If we wanted you to have a life we would have issued you one at CIF (Central Issue Facility)."