A 718th Explosive Ordinance Disposal Company soldier digs a hole to bury a Patriot missile before it is destroyed. (Seth Robson / S&S)

A 718th Explosive Ordinance Disposal Company soldier digs a hole to bury a Patriot missile before it is destroyed. (Seth Robson / S&S) 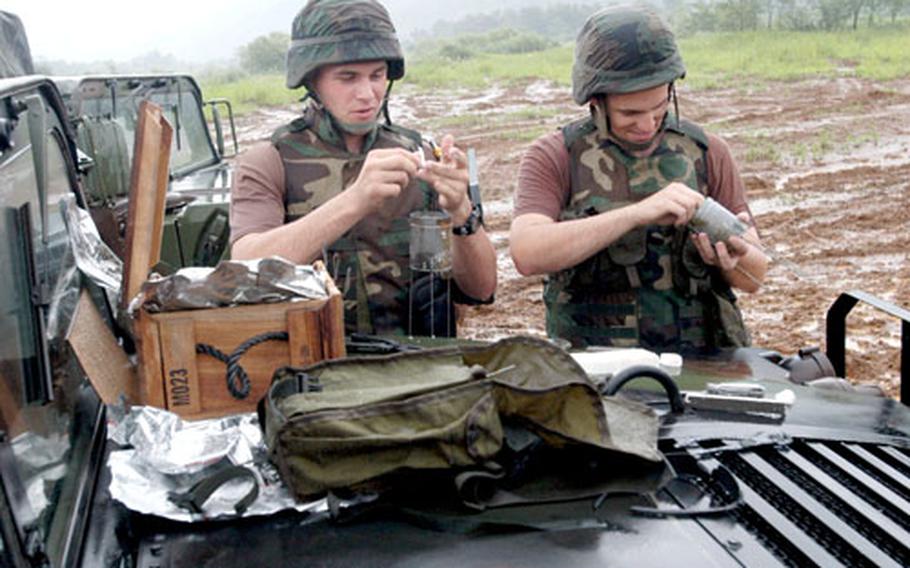 A Patriot missile motor is buried before being disposed of. (Seth Robson / S&S) 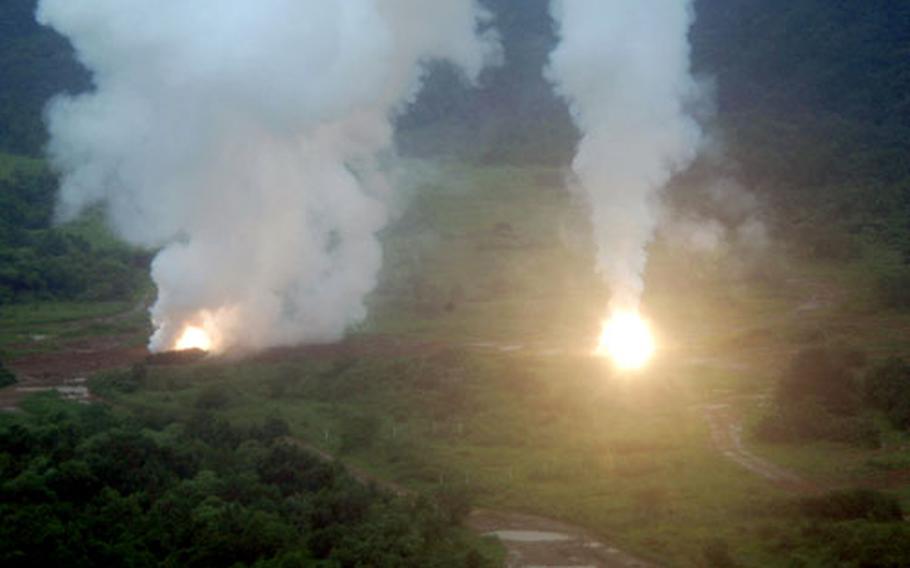 CAMP RED CLOUD, South Korea &#8212; Darkness was approaching, a monsoon rain was falling and the ground had turned to a muddy bog.

But 18 soldiers from the 718th Explosive Ordnance Disposal Company pushed on Thursday with their mission at a South Korean training area near the demilitarized zone.

They were to destroy three Patriot air defense missile motors with C-4 explosives. Sgt. 1st Class Theodore Sharp, 32, of Marion, Ill., one of those overseeing the operation, said the Patriots were defective.

The warheads and guidance systems were removed from the weapons before the disposal operation started, he said.

It began early in the morning when soldiers arrived at the training area, a few miles from Rodriguez Range, with the Patriots packed in large wooden crates.

Digging three holes and burying the missiles, part of their procedure for destroying the Patriots, took several hours.

Sharp said the written procedure made the operation predictable and much safer than disposing of improvised explosive devices or foreign ordnance, where the effects were unknown.

The plan was to use explosive shape charges to ignite propellant in the missiles, he said.

The minimum safe distance from the blasts would be 1,000 feet, Sharp said.

The motors were buried under a muddy pad, devoid of any vegetation that might ignite when the blast came.

But the soldiers had extra insurance they wouldn&#8217;t set fire to surrounding trees and bushes: A steady, drenching rain.

A bigger concern was that lightning might set off the explosives prematurely, Sharp said.

Lightning forced a halt to the operation several times during the day.

While the holes were being dug, a small group of EOD soldiers prepared the shape charges.

Sgt. Marcus Smith, 24, of Seattle, was bending over the hood of a Humvee where he had spread packets of C-4 he was using to fill metal cans known as Mark-3 shape charges.

Working with C-4 is not particularly risky, he said.

&#8220;This stuff is really insensitive and the (blasting) caps we put in are not that sensitive either. We need to put in high-strength blasting caps and then use an electrical current to fire it,&#8221; he said.

The EOD soldiers appeared eager to observe the effects of their work.

Smith said the best explosion he had witnessed involved detonating 1,000 pounds of ordnance such as land mines and mortar shells at Rodriguez Range earlier this year.

It produced a 500-foot-wide mushroom cloud.

Before the charges were placed on the Patriots, all nonessential personnel were evacuated far from the blast site.

For a moment, the area where the missiles were buried, seen from an observation tower about a mile away, stood empty and calm in the fading light.

Then at the press of a button, the missiles ignited, creating fireballs like miniature suns and sending plumes of gray smoke skyward.