Other refugees worry over aid as Syrian plight takes spotlight 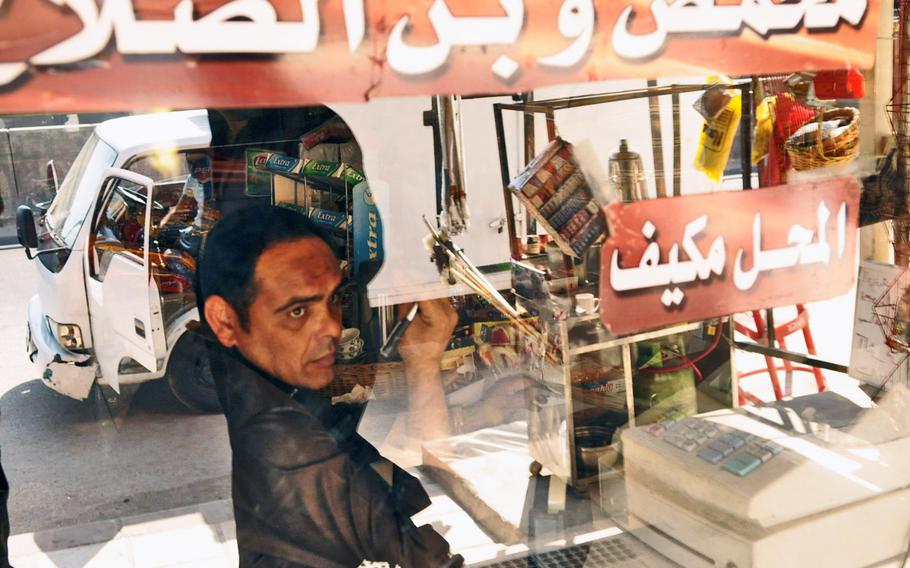 Buy Photo
A Palestinian man inside his shop in the Baqa'a refugee camp in Jordan. (Alex Pena/Stars and Stripes)

Buy Photo
A Palestinian man inside his shop in the Baqa'a refugee camp in Jordan. (Alex Pena/Stars and Stripes) Buy Photo
Muhammad Halaweh embraces his niece in the home that he shares with his sister and brother-in-law. His sister cleans in the small apartment that they've been renting inside the Baqa'a refugee camp in Jordan. Within the past year, Baqa'a has lost its title as Jordan's largest refugee camp to the Zataari Syrian refugee camp in northern Jordan, which houses around 130,000 Syrian refugees. (Alex Pena/Stars and Stripes) Buy Photo
Ibrahim Abu Dayes wathces as his granddaughter walks through their empty home in the Baqa'a refugee camp near Amman, Jordan. Dayes is a Syrian refugee who moved into the camp 1/1 2 years ago because of the Syrian civil war. He says the Palestinians have been extraordinarily accommodating to him and his family since they arrived. (Alex Pena/Stars and Stripes) 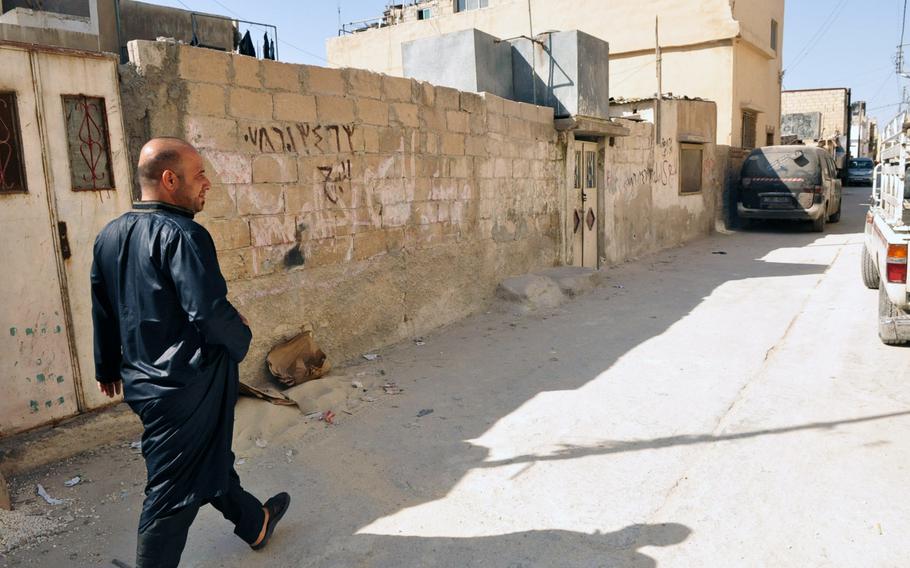 Buy Photo
Muhammad Halaweh, a Palestinian by descent, walks down a street in the Baqa'a refugee camp near Amman Jordan.Halaweh said he worries that Syrian refugees are becoming the priority for the Jordanian government, and services the Palestinians have always received will eventually be transferred to the Syrians. (Alex Pena/Stars and Stripes) Buy Photo
Esmaa Ali Ismira and her daughters have moved into a room at the Baqa'a Palestinian refugee camp in Jordan. Ismira is a Syrian refugee who moved into the camp 1 1/2 years ago when her family fled their home country because of the ongoing civil war. Her family is one of the growing number of Syrian refugees who have managed to move into the more established refugee camps, which were originally designed to house Palestinians. (Alex Pena/Stars and Stripes) 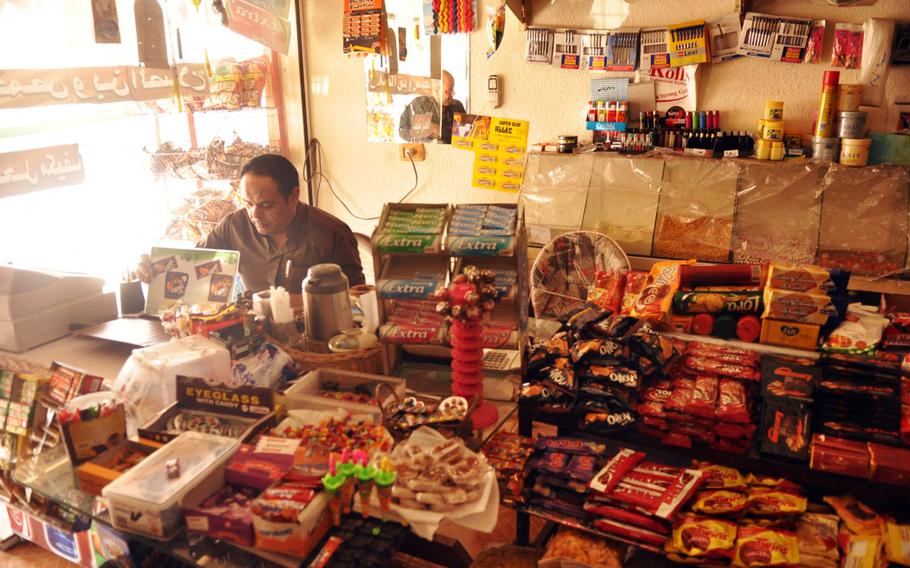 Buy Photo
A Palestinian man inside his shop in the Baqa'a refugee camp near Amman, Jordan. Palestinian refugees living in Jordan fear that resources that had been devoted to their camp will eventually all be shifted to support the large influx of Syrian refugees in the country that are fleeing fighting in their home country. (Alex Pena/Stars and Stripes)

BAQA'A, Jordan — In the sitting room of his run-down apartment in Baqa’a, once considered the largest refugee camp in Jordan, Muhammad Halaweh describes a hard life that has recently become even harder.

A Palestinian by descent who was born in Saudi Arabia and has lived in Jordan for 30 years, his voice rises and he leans out of his chair.

Despite their shared exile, Palestinians say patience with Syrian refugees has begun wearing thin, though they show compassion for their plight. Within the past year, Baqa’a lost its title as the largest camp in Jordan to Zaatari, now home to 122,000 Syrian refugees, according to the U.N. High Comissioner for Refugees. More importantly, they’ve lost a significant share of the aid that has long kept Palestinians here on their feet as the highly publicized plight of Syrians pulls donors away.

Since Syria’s gruesome civil war began in 2011 with a rebellion against President Bashar Assad, more than 500,000 people have fled south to Jordan, a country of about 6 million people. They’re joining nearly 2 million Palestinians who have already settled there, many in the late 1960s when the Baqa’a camp was founded, as well as Libyans and Iraqis.

Jordan’s massive Palestinian population is born in large part from its complex history with the West Bank, which lies on the other shore of the Dead Sea. For nearly two decades, Jordan occupied the West Bank until the Six-Day War, when Israel took control of the area. Baqa’a sprang up after the war ended, though there had been Palestinian refugees in Jordan since the creation of Israel. Since the Six-day War, most West Bank Palestinians have been granted citizenship in Jordan — a rare gift in the Middle East, where Palestinians, even those born on the soil of their host countries, are denied not only the right to vote, but the right to own property.

Most of the residents of Baqa’a, like Halaweh, were born outside of Palestine and qualify for the same government aid as Jordanians, as well as refugee support. While the Syrian refugees live in camps and trailers, usually with no running water or electricity, Palestinian refugees live more like poor city dwellers. With the construction of concrete buildings in place of tents over the years, Baqa’a looks more like a slum than a refugee camp.

Halaweh says that, for years, the Palestinians have leaned on donations from Saudi Arabia and other Arab countries for food, medicine and cash infusions that keep the power on and the rent paid in the concrete warren of Baqa’a. Now, nearly all of those donations go to Syrians instead, Halaweh said, and many of his neighbors are slipping below the poverty line.

Halaweh, like many Palestinians, also fears the Muslim community abroad could forget about the Palestinians as Syria takes center stage. For decades, groups from the Shia Hezbollah in Lebanon to the American-allied Sunnis in Saudi Arabia have agreed on one thing: the righteousness of the Palestinian cause against Israel. Now, all of the Palestinians’ supporters are more focused on advocating for their favorites in the Syrian civil war, be they the Shia-allied Assad regime, extremist Sunni rebels or moderate Republicans.

Paul Stromberg, head of UNHCR opperations in Jordan, said the country is becoming worried, perhaps with good reason, that the Syrians could become more or less permanent residents. The government may be trying to prevent that by keeping its new guests in camps like Zaatari.

“The insistence on camps, I think, is their way of trying to avoid getting stuck with a problem that becomes invisible” when the next crisis hits elsewhere, he said.

Jordan in particular ends up hosting a massive number of refugees for a variety of reasons: its unstable neighbors, Islam’s strong tradition of hospitality, and because those fleeing war gravitate toward such a stable country. Lebanon has taken the largest share of Syrian refugees, but with a recent wave of car bombings and a violent history entangled with Syria’s politics, many refugees likely worry about ending up in another war zone, Stromberg said.

Jordan has generally taken up its role as host with aplomb. Jordanian officers at the border often share their own meals with Syrian refugees until they can be transferred to a camp like Zaatari, Stromberg said.

The camps are maintained primarily by international organizations, but about three quarters of refugees move to the cities and try to live a normal life, Stromberg said. The Jordanian government subsidizes many of its residents’ daily needs, like water and electricity, so a bigger population means a bigger burden. That is beginning to wear on the population.

Jordan Times conducted a poll in August that found 65 percent of citizens wanted to close the border to more Syrians.

“I think what we can say is [compared to what] we’ve seen from the beginning, when small numbers could be absorbed, and absorbed with generosity and open arms, it’s become more difficult,” Stromberg said.

Dawood Sulieman, a branch manager in Amman for the Sunni Muslim charity Call for Good, said the poor Jordanians who used to be their main clients are also suffering.

On a Sunday afternoon, Syrian women dressed in black robes and veils fluttered in front of the charity’s gate, wielding UNHCR papers to prove their refugee status in the hopes of taking home food or money.

Call for Good receives some donations from Jordanians, but it also relies on wealthy donors in oil-rich Middle Eastern countries like Saudi Arabia and the United Arab Emirates. Since the start of the Syrian conflict more than two years ago, many of those donors have begun earmarking their contributions for Syrian refugees.

Call for Good has thus had to cut its support for some Jordanian families.

“We feel sorry about it,” Sulieman said, but he has to tell them, “‘these are donations for the Syrians, not for you.’ And what makes the Syrian refugee situation worse, it happens at all the different agencies.”

Even with Middle Eastern compassion focused on Syria, conditions for many Syrian refugees are dire. In Zaatari refugee camp, residents live either in trailer-like caravans or sweltering tents, neither of which have electricity or running water. Those who are employed often earn about $2 per day. Prices are inflated, since everything not provided by charities is purchased first from Jordanians outside the camp and then sold at a mark-up. The makeshift desert community, which sprang up just last year, is now the fourth-largest city in Jordan and still growing.

Hani Al Qaesi is the deputy police chief for the sprawling camp. He stressed that Jordan alone cannot provide for the refugee community, which with all foreign nationals combined, totals nearly half of its population.

“Sometimes we feel that what we are providing is not quite enough for the huge numbers of people coming to the camp,” he said.

But Al Qaesi speaks for many Jordanians when he says they have a responsibility to keep taking in refugees, wherever they’re from or however many there are.

Halaweh, the Palestinian who complained about Syrian newcomers, led reporters to a home in Baqa’a being rented from its Palestinian owners by a large family of Syrian refugees.

Ibrahim Abu Dayes, the family patriarch, had one of his grandchildren bring coffee for his Palestinian and American guests.

“Palestinians are the best people on earth,” Dayes said. “They have provided everything for us.”

Dayes and his family no longer rely on UNHCR handouts, he explained. His three sons have low-wage jobs, and whatever they can’t pay for is provided by charity — not from Saudi Arabia, but from their Palestinian neighbors.

Halaweh and Dayes’ wife talked about medication the family needed. Halaweh offered to help them with a trip to a pharmacy.

A Palestinian friend of Halaweh, Nadeer Hudib, said, despite having to share, he accepts the Syrians as “brothers.”

“Before the Syrians came here, there were also Libyans. There were Iraqis. All people who are suffering come to Jordan,” he said.