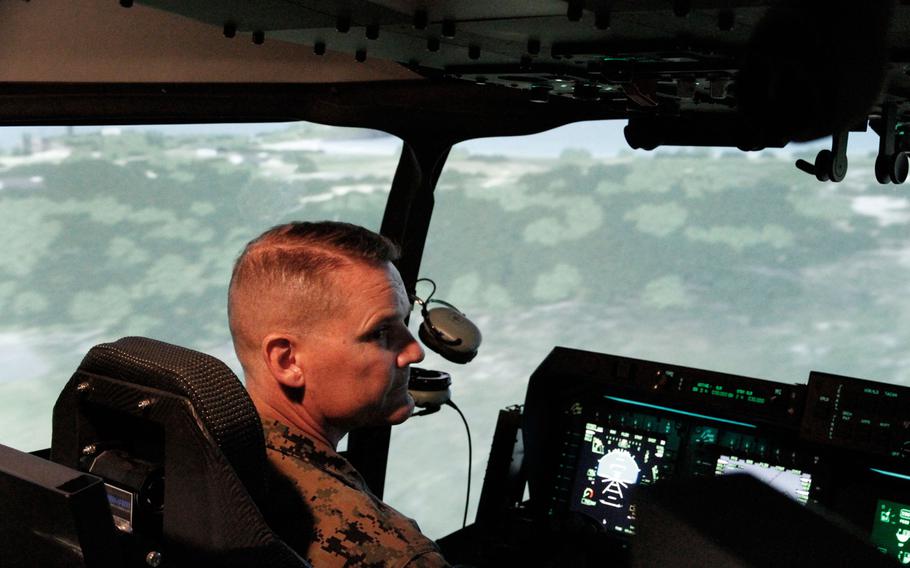 Brig. Gen. Russell A. Sanborn, commander of 1st Marine Aircraft Wing, sits in the cockpit of an Osprey MV-22 simulator during a demonstration June 28, 2016, at Marine Corps Base Hawaii. (Wyatt Olson/Stars and Stripes)

MARINE CORPS BASE HAWAII — Marines in Hawaii will get their first squadron of Osprey MV-22s after the aircraft participate in the upcoming Rim of the Pacific exercise.

But pilots here have already begun flying along the coasts and over the mountains of Oahu from the cockpits of two multimillion-dollar simulators, which became fully operational earlier this month.

The virtual images that appear outside the cockpit windows are startlingly real, with detailed landscape of the island and the surrounding waters.

“The realism is extraordinary,” Maj. Josh Fraser, the MV-22 transition officer at the base and an Osprey pilot, told reporters Tuesday during a tour of the two simulators, each about the size of a small house. Each has an exact replica of the Osprey cockpit, and virtual images replicate the runway, hangars, sea, sky and terrain.

“I had a significant number of flights that were in a simulator before I actually climbed into an aircraft,” he said. “Once I actually got into the aircraft — I climbed in, started it up, taxied out, flew a mission, came back, landed -- it was seamless. That’s how realistic it is.

“I can control the entire environment: the weather, day or night, night illumination, number of stars.” He can insert other aircraft into the scenario, as well as land- or air-based enemy threats.

Operating an Osprey costs about $10,000 an hour, compared with the simulator’s $250-an-hour expense, he said. Each simulator costs about $9 million, a fraction of the roughly $80 million for an Osprey.

Training on the simulators also reduces the number of training flights — along with all the associated noise — that would be needed to fly around Oahu.

Hawaii is among the last Marine bases slated to receive Osprey squadrons based on the service’s master aviation plan, said Brig. Gen. Russell A. Sanborn, commander of 1st Marine Aircraft Wing, which already has two squadrons of Ospreys in Okinawa.

Hawaii will receive a second squadron of a dozen Ospreys in fiscal year 2018, he said. Ospreys will also eventually be based in Guam, he said. Work is now underway to build facilities for several thousand Marines who will relocate to Guam from Okinawa.

Sanborn said having Ospreys located across the theater is a fulfilment of the rebalance of forces to the Pacific.

“We think it’s going to be our game-changer out here,” he said.

The Ospreys, which feature a tilt-rotor engine so the aircraft can fly both as a helicopter and fixed-wing plane, began replacing CH-46E and CH-53D choppers in 2005.

The Osprey has “three times the lift capability, twice the speed and twice the distance” as its predecessors had, he said.

With a range of 6,000 miles, an Osprey based in Hawaii has a long reach.

“This plane may be home-stationed here, but it’s planned to go all over the Pacific,” Sanborn said. “This just happens to be its home.”