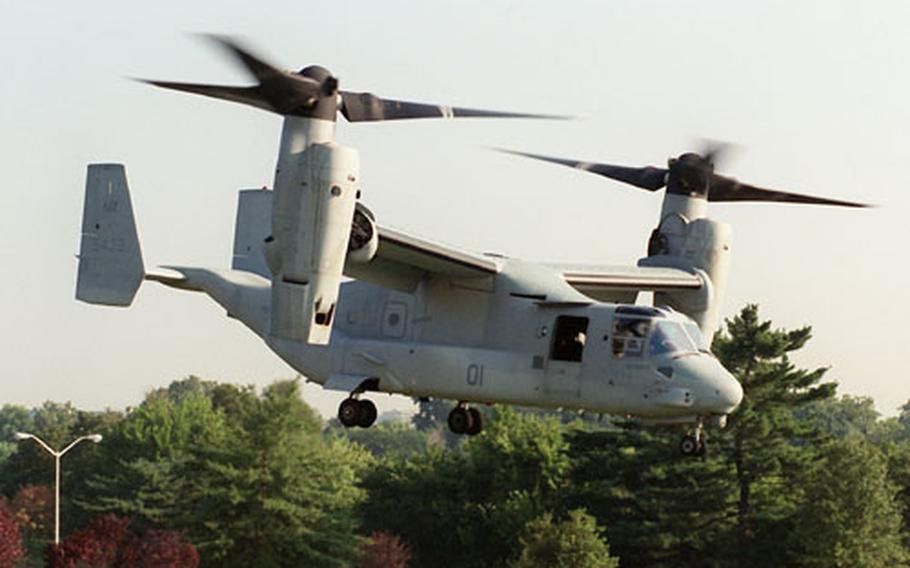 A Bell Boeing MV-22 Osprey comes in for a landing at the Pentagon on Sept. 8, 1999, to demonstrate its capabilities before an audience of Department of Defense officials, members of Congress, and news reporters. The Osprey is the first operational aircraft to utilize tiltrotor technology. Taking off like a helicopter, the Osprey&#39;s engines then rotate forward 90 degrees to create a conventional aircraft configuration permitting high-speed, high-altitude, fuel-efficient flight. (Courtesy of DOD)

A Bell Boeing MV-22 Osprey comes in for a landing at the Pentagon on Sept. 8, 1999, to demonstrate its capabilities before an audience of Department of Defense officials, members of Congress, and news reporters. The Osprey is the first operational aircraft to utilize tiltrotor technology. Taking off like a helicopter, the Osprey&#39;s engines then rotate forward 90 degrees to create a conventional aircraft configuration permitting high-speed, high-altitude, fuel-efficient flight. (Courtesy of DOD) 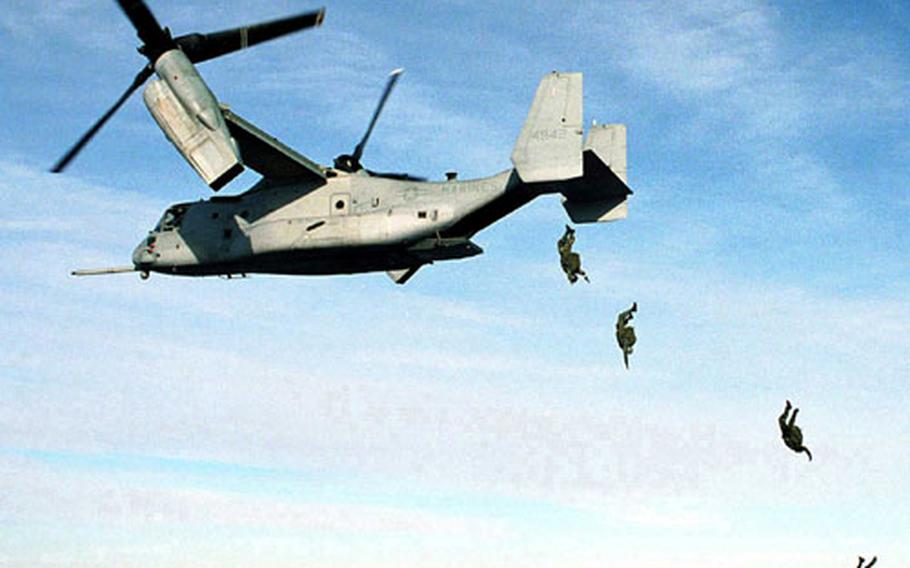 U.S. Marine Corps parachutists free fall from an MV-22 Osprey at 10,000 feet above the drop zone at Fort A.P. Hill, Va. on Jan. 17, 2000. The Marines from the 2nd Reconnaissance Battalion, 2nd Marine Expeditionary Force, Camp Lejeune, N.C., became the first to deploy from the Osprey. Twenty-four successful jumps were recorded under the supervision of the U.S. Army Operational Test Command and the Marine Corps Systems Command to qualify the V-22 for parachute service. (Courtesy of DOD)

ARLINGTON, Va. &#8212; Maybe the Marine Corps&#8217; V-22 Osprey tilt-rotor aircraft should be renamed the Phoenix, after the legendary bird that rose from the ashes. Or the Feline, in honor of the its nine lives.

When the high-level Defense Acquisition Board met last week to evaluate the results of the Osprey&#8217;s last-chance testing program, the group decided to give its blessing for the Osprey to move forward.

The decision came in the wake of a series of program disasters, in particular the tragic loss of 23 Marines who died in two separate crashes in April and December 2000. The V-22 program has also been plagued by allegations of mismanagement that ended the careers of more than one Marine officer.

In a meeting with reporters Friday, Pentagon procurement chief Edward C. &#8220;Pete&#8221; Aldridge, who chairs the DAB, said that when he took his office as in 2001 he was amazed at the awful state of the Osprey program.

&#8220;When I looked at this airplane, it was clear that we did not have a clue,&#8221; he said, listing poor design, inadequate program documentation, and a host of other woes.

The Osprey is based on a revolutionary concept that uses swiveling rotors mounted on wings. The rotors can tilt up, allowing the V-22 to take off and land like a helicopter, or rotate forward, so the craft flies with the speed and range of a turboprop.

The Marines want 360 V-22s to replace their aging troop transport helicopters, and the special operations community is interested in fielding at least 50.

But the crashes grounded the Osprey and threw its future into shadow.

Last December, Aldridge also ordered an intensive flight test program that is under way at Patuxent River, Md., for the Marines, and in California for the Air Force, who is handling the special operations version.

The DAB evaluated the results of that test program during its Tuesday meeting, and decided to allow the Osprey to continue along its path towards a production decision.

Meanwhile, Pentagon officials have decided to keep the production line warm, budgeting $1.6 billion so that V-22 makers Bell Helicopter Textron Inc. of Fort Worth, Texas and the helicopter division of Boeing Co. $1.6 billion can build 11 tilt-rotors in 2004.

But Aldridge, who retired from his position as Under Secretary of Defense for Acquisition, Technology and Logistics on Friday, stopped short of proclaiming himself a V-22 &#8220;convert.&#8221;