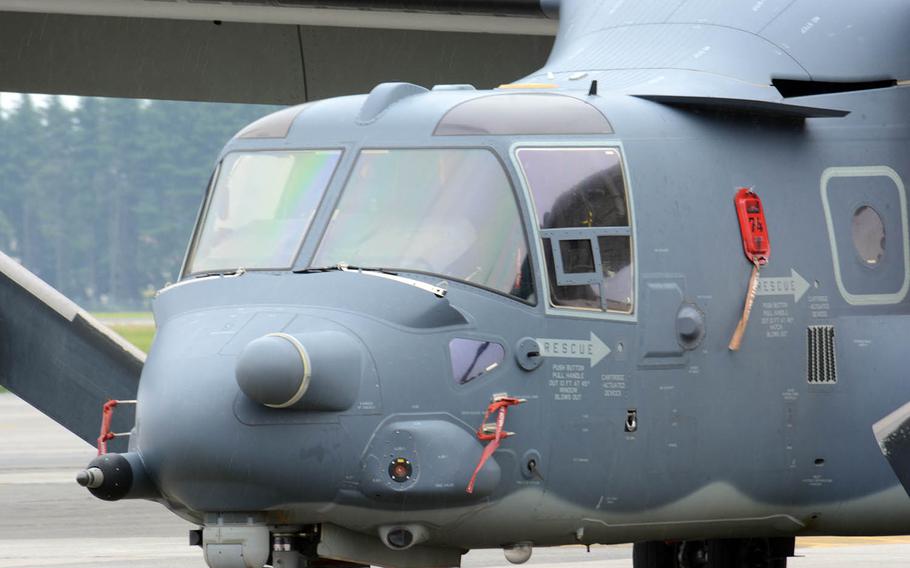 The Air Force doesn’t have to give notice before aircraft land at U.S. or Japanese facilities that it has permission to use, a U.S. military official said Thursday after residents complained about a CV-22 Osprey landing in Saitama prefecture, Japan.

Local government officials told Japan’s Defense Ministry that they weren’t informed before the tiltrotor aircraft landed briefly at the Tokorozawa Communications Site on Monday evening. The landing sparked noise complaints from residents, according to the Tokyo Shimbun newspaper.

“There is no requirement for any type of pre-notification before we use U.S. facilities or Japanese facilities for which we have agreements on usage,” Air Force spokesman Master Sgt. Michael Davis said in a statement Thursday. “The air operations in question are in line with relevant airspace agreements and regulations between the United States government and the Government of Japan.”

Davis declined to state why the aircraft landed at Tokorozawa, citing the need for operational security.

The 242-acre Tokorozawa site is operated by personnel from the nearby Yokota Air Base in Tokyo and includes an antenna and warehouses.

Five Special Operations Ospreys — capable of taking off like helicopters, then tilting their rotors to fly long distances as fixed-wing aircraft — began operating out of Yokota in April.

Activist group Rim Peace told Tokyo Shimbun that the Tokorozawa facility might be turned into a training site for the Ospreys, which could lead to more low-level flights over residential areas nearby.

According to Davis, the communications site was already available for training by UH-1 Huey helicopters and there has been no change in its status. It’s important for all aircraft operating out of Yokota to be familiar with the surrounding areas and facilities to ensure safety during training and operations, he said.

“While we are committed to minimizing the impact of operations on the local communities, US forces will utilize all appropriate areas made available … by treaty with Japan in support of Alliance obligations and the defense of Japan,” he said in the statement.

Another Yokota-based Osprey returned home safely Wednesday after more than a month at Amami Airport in Kagoshima prefecture, where it made an emergency landing June 4, Davis said.