Osprey gets support role in Marine One squadron 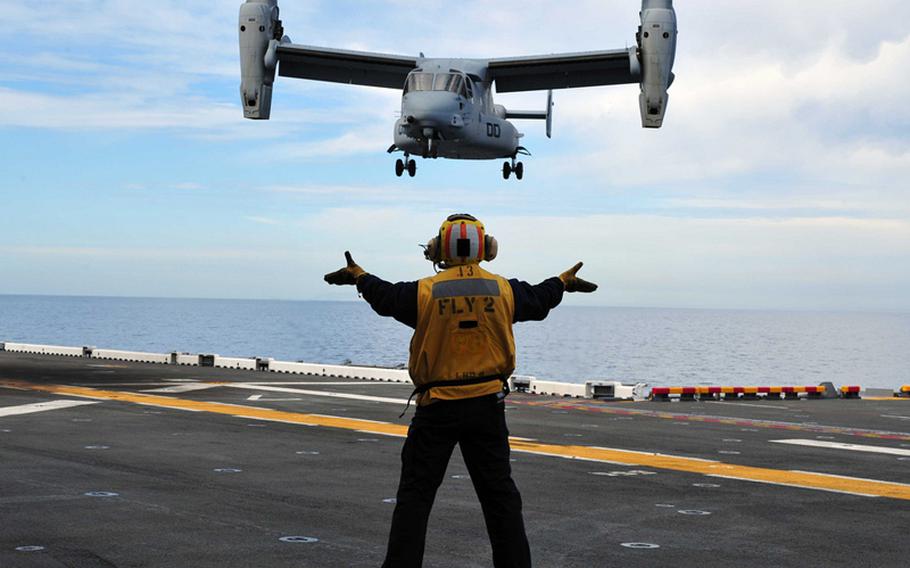 HMX-1’s tilt-rotor aircraft is painted green and will be used in a support role, transporting the president’s staff and the media, Marine spokesman Capt. Richard Ulsh confirmed.

Helicopters that transport the president are typically painted white on top and referred to as “white tops.”

“The Osprey is a staple within our fleet. It has proven itself in the most difficult environments as a capable and reliable asset,” Ulsh said, noting that including the Osprey in the HMX-1 fleet “highlights the maturity of the technology and safety of the aircraft.”

The Osprey, which flies like a plane but can take off and land like a helicopter, has flown combat missions in Iraq and Afghanistan, but had a difficult developmental history and roused controversy when it was announced that some of the hybrid aircraft would be based in Japan. Japanese citizens and officials were concerned about the Osprey’s safety record, citing two high-profile crashes in 2012.

The U.S. and Japanese governments conducted independent investigations of the two crashes and found that the pilots, not faulty aircraft, were to blame.

HMX-1 is based at Marine Base Quantico, Va., and operates a fleet of “white top” VH-3D Sea King and VH-60 White Hawks, as well as “green top” CH-46E Sea Knights.

Since the Osprey entered the fleet, the Marine Corps has been gradually replacing its Sea Knights with the new aircraft.