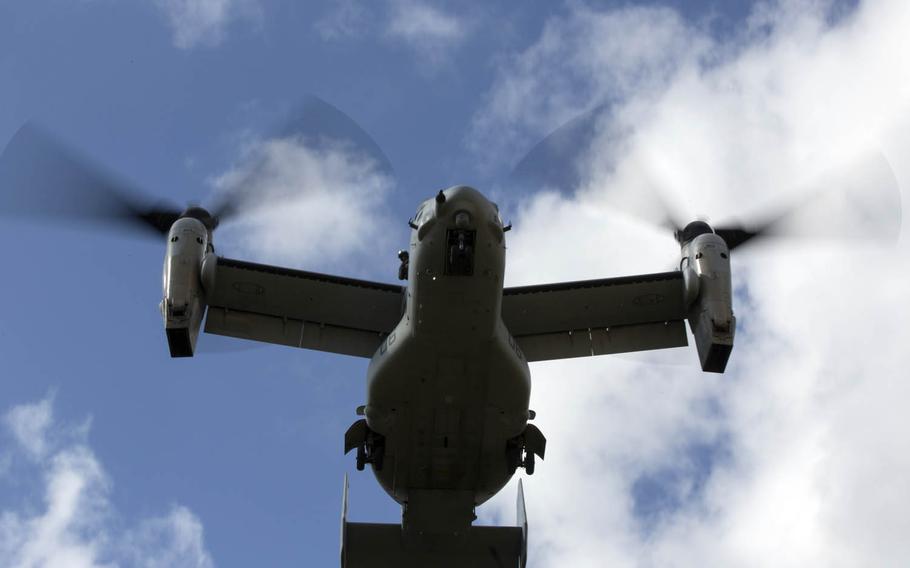 CAMP FOSTER, Okinawa — The Marine Corps has resumed MV-22 Osprey aerial-refueling drills on Okinawa less than a month after one of the tilt-rotor aircraft crashed off Camp Schwab.

The decision, announced this week by U.S. Forces Japan, has drawn a sharp rebuke from local officials on the small island prefecture, though Japan’s Ministry of Defense said USFJ is doing enough to ensure locals’ safety.

“The Japanese government keeps saying it will stay close to the feelings of the Okinawan people, but in reality it always gives first priority to the demands of U.S. military,” Gov. Takeshi Onaga, who won election on an anti-base platform, told a news conference Thursday night. “I will urge the government to establish a system that adequately reflects the voices of Okinawa when it looks into the resumption of the drills, instead of blindly accepting the assessment of the military. I will continue to strongly urge cancellation of deployment of the Ospreys to Okinawa.”

Nago Mayor Susumu Inamine agreed, calling restarting the drills unacceptable. Ginowan Mayor Atsuhi Sakima said that while he understands the U.S. military’s explanation for the Dec. 13 crash — a propeller reportedly cut a thick refueling hose on an Air Force C-130 tanker — he had concerns about resuming the drills before completing the final investigation.

“Fears of residents about the safety of the Ospreys are not dispelled yet,” said Sakima, whose city hosts Marine Corps Air Station Futenma, where the aircraft are based.

The uproar seen this week reflects how the MV-22 Osprey has been politicized on Okinawa, though some residents have genuine fears about the aircraft.

Protesters intent on seeing a reduction of U.S. forces on the island adopted the helicopter-plane hybrid as a symbol of their resistance in 2012, when it deployed to Okinawa after several high-profile crashes during its development.

The Osprey has since performed admirably during combat operations in Iraq and Afghanistan, and in humanitarian operations across the Pacific, its pilots have said.

Though the military hailed the pilot in last month’s crash as a hero for purposefully downing the damaged aircraft just offshore to avoid trying to limp back to base over homes, protesters seized on the incident before a Marine Corps investigation determined mechanical failure was not involved.

U.S. military officials said the training is vital to readiness in the region and vowed to continue aerial-refueling drills once its pilots had logged classroom and simulator time.

The U.S. military has done enough to ensure the Okinawan people’s safety, the Ministry of Defense said in a statement.

U.S. officials also announced this week that refurbishments to Futenma’s runways have started and will continue through the first of next year.

The air station is scheduled to close after aircraft relocate north to Camp Schwab, but the move has been hampered by protesters and Onaga, who want to see air operations taken off Okinawa entirely.

“We were informed by the defense ministry of the renovations and were told the purpose is to maintain the safety of the flight operations, not to prolong the presence of the facility,” said a spokesman for Ginowan City’s military affairs office. “Our opposition to anything that would contribute to a permanent presence of the facility remains unchanged. We urge the facility be returned at the earliest possible date.”