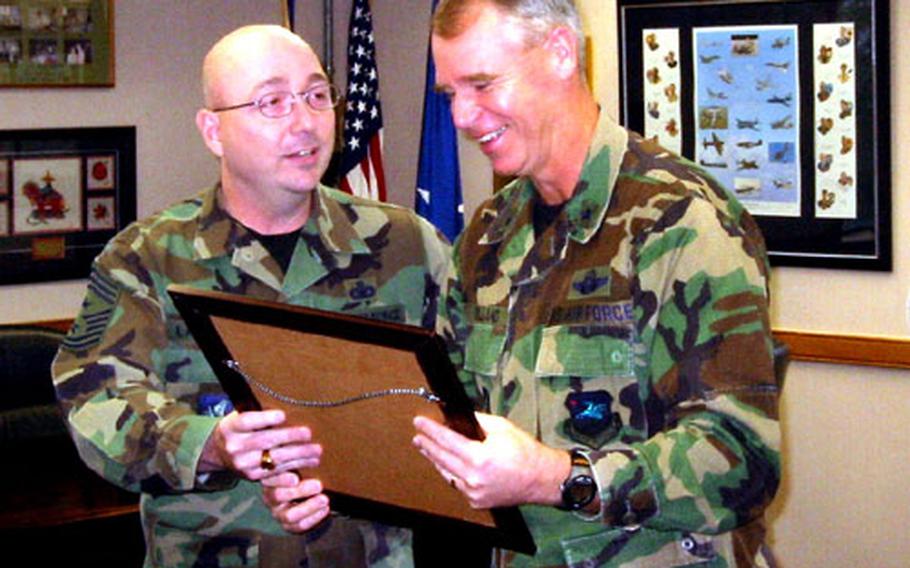 Chief Master Sgt. Thomas Langdon, left, with his boss, Brig. Gen. William Holland, who commands the Air Force&#39;s 51st Fighter Wing at Osan Air Base, South Korea, as they look over a plaque given the general at a recent ceremony. Langdon, the wing&#39;s Command Chief Master Sergeant and Holland&#39;s top enlisted adviser, ends his Osan later this month and moves to Misawa Air Base, Japan. (Courtesy of USAF)

Langdon is the 51st Fighter Wing&#8217;s command chief master sergeant, responsible for the quality of life of the more than 3,500 airmen at Osan.

On all enlisted issues, Langdon is also principal adviser and assistant to the wing&#8217;s commander, Brig. Gen. William Holland.

A key ingredient in good leadership, Langdon said Thursday, is knowing some detail about each subordinate.

&#8220;You have to work to try to understand where other people are operating from, their backgrounds, what is important to them, where do they want to go,&#8221; he said.

And, Langdon said, noncommissioned officers should watch for leadership potential within the ranks, and cultivate it early.

Langdon entered the Air Force in 1977, and after training as a security specialist, was assigned to the 325th Security Police Squadron at Tyndall Air Force Base, Florida.