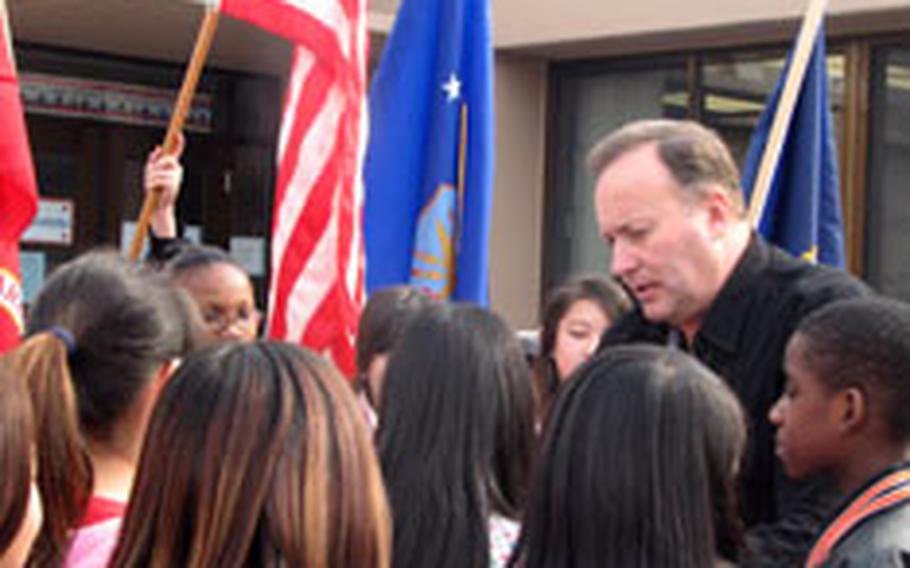 SEOUL &#8212; A sixth-grade teacher at Osan Air Base was named the Pacific region&#8217;s Veterans of Foreign Wars&#8217; Elementary School Teacher of the Year and will be entered in a national competition, officials confirmed.

While he joked that he&#8217;s more a &#8220;second-place guy,&#8221; he faced stiff competition in the Pacific in the VFW&#8217;s National Citizenship Education Teachers&#8217; Award. Teachers from Japan, South Korea, Okinawa, Taiwan, Thailand, Guam, Cambodia, Saipan and the Philippines compete each year. Both DODDS and private school teachers vie for the recognition.

School psychologist Mike Welsh nominated Clark for the award, given to those &#8220;who teach citizenship education topics regularly and promote America&#8217;s history and traditions,&#8221; according to the VFW.

After medically retiring from the Marine Corps, he said he decided to teach. Within a few years, he said he realized how much he missed the military community and looked into teaching at DODDS.

He thinks his time as a Marine officer gives him a unique perspective when dealing with military parents.

Giving his home phone number and e-mail to parents is automatic, he said. He&#8217;s experimented with hosting Web sites parents can visit during their often hectic work schedules and has held parent-teacher conferences as early as 6 a.m.

He believes the parents appreciate his effort and he wants them as involved as possible in their kids&#8217; education. They have the power to point the kids in the right direction, he said.

Clark said he tries to make learning fun. Since he hated grammar when he was in school, he now challenges his students to ensure they stay interested.

Work as a group and find all the mistakes in prepared sentences, Clark tells them, and he hits the floor and cranks out 60 push-ups.

He also brings his students outside each Friday to &#8220;post the colors&#8221; in a military-like ceremony. His kids sing the national anthem and each of the service songs. He&#8217;ll play his trumpet while the kids bang on bongos and other instruments.

But he also uses the time to talk about more serious things.