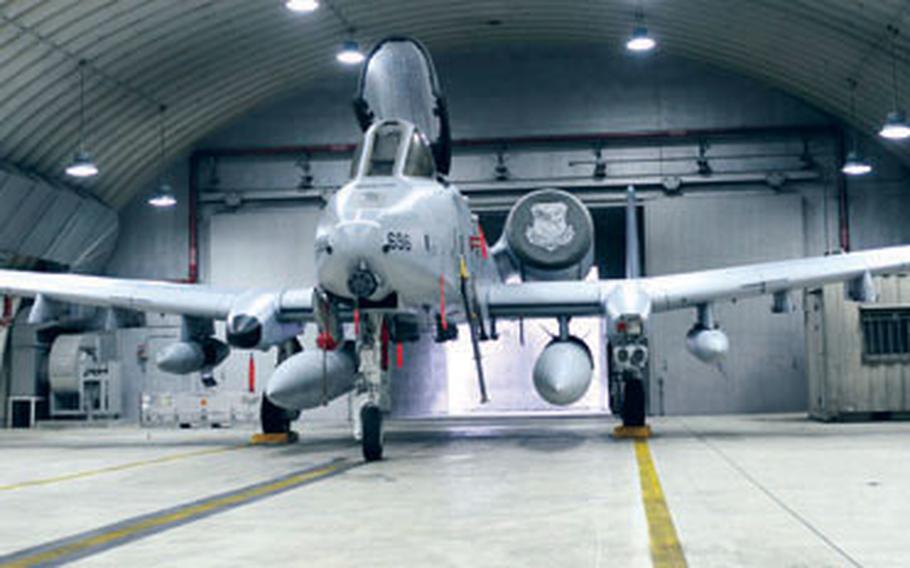 At Osan Air Base in South Korea earlier this month, a newly arrived A-10C ground attack plane assigned to the 25th Fighter Squadron sits in a hanger. The squadron has begun a transition from the A-10A to the newer C-model, which, among other new capabilities, can launch state-of-the-art GPS satellite-guided smart bombs, something the A model could not. (Stephenie Wade / USAF)

OSAN AIR BASE, South Korea &#8212; The Air Force&#8217;s ground-attack airplane in South Korea is being replaced with an upgraded version that can strike targets with state-of-the-art satellite-guided smart bombs, officials said Monday.

The 25th Fighter Squadron at Osan Air Base currently flies the A-10A Thunderbolt II, known as the Warthog.

It received its first three C-models with smarter weapons capability earlier this month, with more to come at an undisclosed future date.

The squadron is known as the Assam Draggins and has 30 aircraft.

The A-model Warthog can launch high-tech laser-guided bombs and other munitions, but not the more advanced satellite-guided JDAM &#8212; or joint direct attack munition &#8212; that C-models can. The newer version started entering the Air Force inventory in 2007.

Besides the ability to launch JDAMs, the C-model is fitted with new electronics gear that allows pilots to receive key targeting and other data digitally.

That can help them get vital information earlier in the mission and can shorten the &#8220;kill chain&#8221; &#8212; the time that elapses from takeoff to the striking of the target, Kaercher said.

In addition, the digital situational awareness data link, or SADL, reduces the A-10 pilot&#8217;s reliance on radio transmissions, which can sometimes be impeded by distance, weather conditions, mountains and other obstructions, and heavy radio traffic, Kaercher said.

From the outside, the A-10C looks no different from the A model, and it has the same 30mm Gatling gun, which has a reputation for devastating lethality.