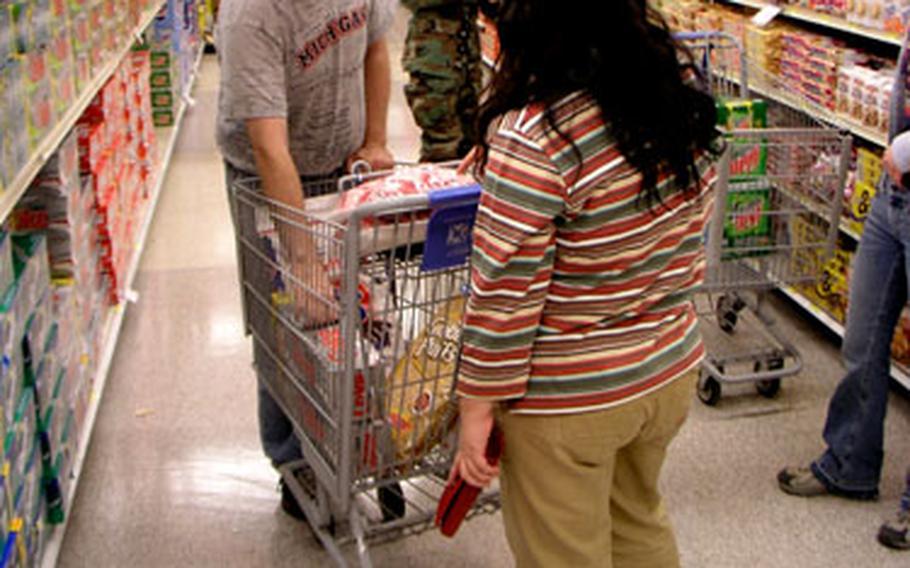 Charles Sanders works his way down the aisles of newly renovated Osan Air Base commissary in South Korea on Friday. The renovation began in September 2003. (Franklin Fisher / S&S)

Charles Sanders works his way down the aisles of newly renovated Osan Air Base commissary in South Korea on Friday. The renovation began in September 2003. (Franklin Fisher / S&S) 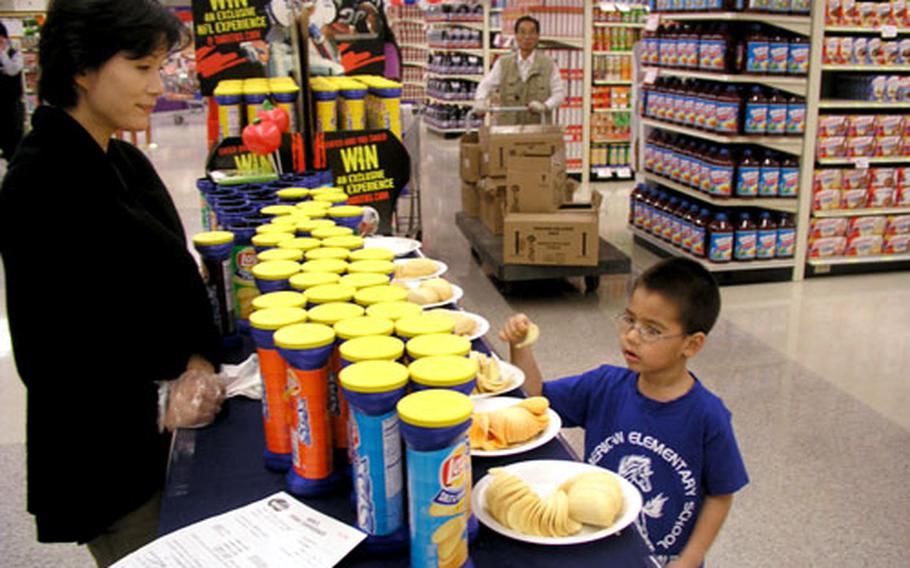 A youngster samples a free chip at the newly renovated Osan Air Base commissary in South Korea on Friday afternoon. Officials marked the completion pf the project with a brief ceremony and merchandise giveaways. (Franklin Fisher / S&S)

OSAN AIR BASE, South Korea &#8212; With brighter lights, bigger aisles and more merchandise on its shelves, the commissary at Osan Air Base held its official &#8220;grand reopening&#8221; Friday to mark completion of a major renovation.

The store had remained open during the renovation, which began in September 2003.

The renovation was part of a $13.7 million project that includes construction of a perishable foods storage center inside the commissary building.

The center is set for completion in February and will store perishable items for all 12 commissaries on the peninsula, said Nancy O&#8217;Nell, Defense Commissary Agency West spokeswoman.

The renovation has increased the store&#8217;s square footage, taking it from 98,691 square feet to 103,467 square feet, according to DECA. On result is that the sales floor area has grown by almost 25 percent.

&#8220;They really did a fantastic job of renovating everything, I think,&#8221; said Charles Sanders, an aviation contractor who works at nearby Camp Humphreys and has shopped at the commissary for years. &#8220;Seems like you&#8217;ve got a lot more room, too.&#8221;

The store further increased its ability to display merchandise by switching from &#8220;coffin-style&#8221; to upright freezers. The increased display space is in the store&#8217;s produce, frozen foods, chilled foods, and meat sections.

In the meat section, for example, a change from 60 linear feet of coffin-style freezers to the upright variety boosted meat shelf space fourfold.

The project also added a new aisle with 144 linear feet of such items as bottled water, rice cakes, pastries, bread and frozen foods.

D&#233;cor, including new flooring and lighting, matches that of other DECA commissaries.

In addition, new administrative offices and 18 parking spaces were added.

Sales are expected to increase from $1.14 million to $1.20 million per month, according to DECA.

Officials kicked off the shopping day with a ribbon-cutting ceremony and special promotions including drawings for prizes to be given to customers throughout the weekend.