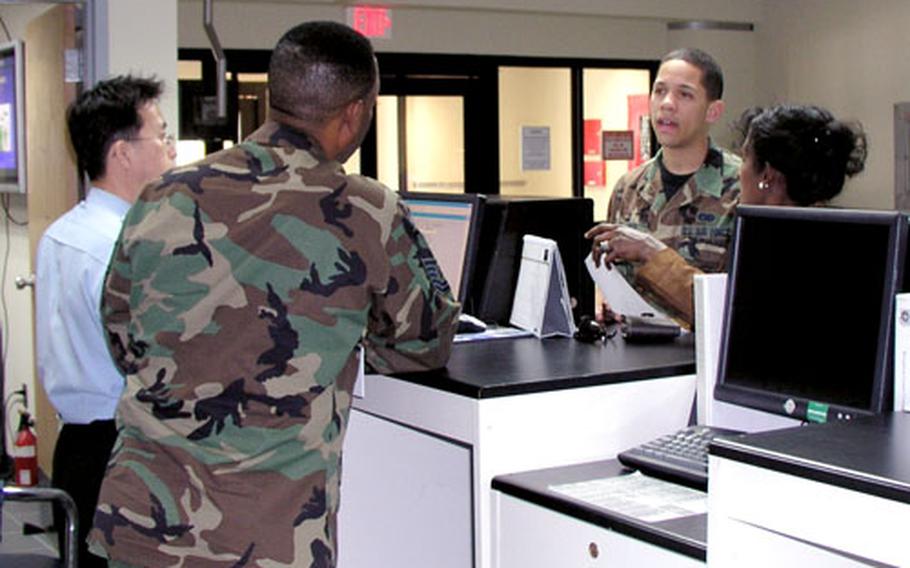 At the newly renovated air passenger terminal at Osan Air Base in South Korea on Monday, terminal staff help a customer with a question about a space-available flight. From left are customer Janaki Morgan, Tech. Sgt. Mark Ware, Senior Airman Derek Lynch and Yi Myong-chong, a passenger service agent. Ware and Lynch are with the 731st Air Mobility Squadron, which runs the terminal. Officials closed it last year for safety reasons but reopened it last month after major renovation. (Franklin Fisher / S&S)

OSAN AIR BASE, South Korea &#8212; The base passenger terminal here once again is back at its original location at the flight line, meaning passengers no longer face a 10-minute bus ride between plane and terminal.

But the terminal &#8212; which reopened in February after a year of renovation &#8212; is about two-thirds smaller than before, offers food vending machines instead of its former snack bar and is about a mile from the base commercial complex.

That&#8217;s when Air Force engineers submitted a written report that the building was unsafe because of several steel beams that gradually had bent. Base officials hurriedly settled on an interim terminal &#8212; Building 920, about a mile away in the then-vacant former base exchange.

Meanwhile, they overhauled the old terminal building and ended up having to demolish about two-thirds of it.

Dickens said the interim location had pros and cons.

Base officials Tuesday said workers will tear down the former BX sometime this fall before building a new community activities center to replace the one now housed in Building 345.