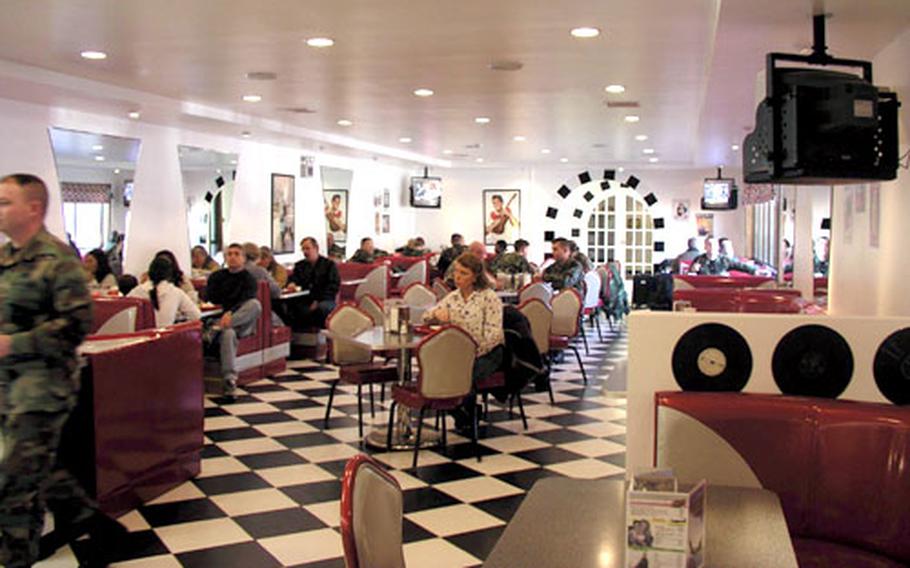 The newly opened Checkertails at Osan Air Base in South Korea, the base’s only 24-hour eatery featuring a 1950s diner theme, had its grand opening Monday. (Franklin Fisher / S&S)

OSAN AIR BASE, South Korea &#8212; Ohop, the popular spot that was this base&#8217;s only 24-hour eatery before it closed last month, reopened Monday in a new location and with a new name, broader menu, and a 1950s theme recalling the Korean War service of a famous American fighter plane.

The newly named Checkertails will continue as Osan&#8217;s only 24-hour eatery, operating out of Building 924. It&#8217;s just across the street from the former Mini-Mall, Building 948, which is to be demolished and turned into a parking lot for the nearby Osan Shopping Mall, which opened weeks ago.

Like the former Ohop, Checkertails &#8220;is the only 24-hour operation on base, and that&#8217;s why we felt it was important to keep it,&#8221; said Lorna Fermanis, Osan Officers Club general manager.

Checkertails has been designed with a 1950&#8217;s diner theme, evoked in part by photos and other images of the era: pictures of Elvis Presley, movie actor James Dean, a photo of a smiling Marilyn Monroe with her dress being blown back as if by a gust of wind, and Fifties-era Coca Cola posters.

And seating is a diner-style arrangement of booths on either side and tables down the main aisle.

The menu has a wider selection than what Ohop offered, Fermanis said.

Milk shakes and floats are on the menu too, in keeping with the Fifties theme.

And Checkertails has introduced a &#8220;First Termer&#8217;s&#8221; menu, available only to servicemembers in pay grades E-1 through E-4, with lower prices geared to the junior enlisted paycheck.

Also on the menu are burgers, sandwiches, and, as at the former Ohop, two Korean selections: beef bulgogi, or chicken bulgogi, both at $4.95.

&#8220;This brings something totally different on the base, he said. &#8220;As to the added selection, it brings things like the floats. That helps the 50s atmosphere and it just helps lighten the mood.&#8221;

The name Checkertails refers to the checkerboard pattern that appeared on the tail of a U.S. Air Force F-86 Sabre jet in July 1952. The Sabre was a day fighter that became famous for its dogfights against Russian-built MiG-15 fighters during the Korean War. By the end of the war in 1953, Sabres had downed 792 MiGs, with 76 Sabres lost, according to the Air Force here.

Like many other airmen at the busy base, Master Sgt. Donald Payne frequented Ohop.

&#8220;It was accessible 24 hours, so, depending on what shifts you&#8217;re working, we could always go in there. I liked that about it. And they served breakfast anytime. That was one of the big draws for me,&#8221; said Payne, assigned to 7th Air Force here.

He welcomed the news of Checkertails and said he counts himself especially fortunate that its opening comes just weeks after the grand opening of the sprawling Osan Shopping Mall, which houses the BX, food court, and other businesses.