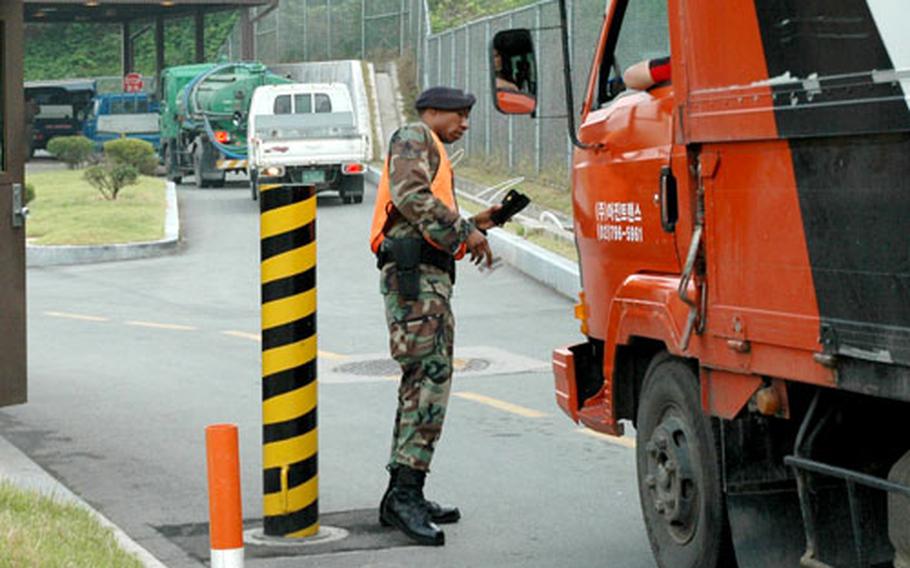 An airman checks motorists’ identification at the Beta Gate of Osan Air Base, South Korea, on Friday. Visitors now are required to sign in at Doolittle Gate, but then must enter the base through Beta Gate. (Brok McCarthy / U.S. Air Force)

OSAN AIR BASE, South Korea &#8212; Motorists no longer can enter Osan Air Base through the Doolittle Gate.

Instead, since June 5, commercial vehicles such as those driven by South Korean contractors must sign in at the Doolittle Gate, then drive to the Beta Gate and enter the base there.

The Doolittle Gate now is open only to vehicles leaving the base between 6 a.m. and 7 p.m., said Lt. Col. Randall Richert, commander of the 51st Security Forces Squadron. It remains open 24 hours a day to pedestrians, though servicemembers still are subject to curfew restrictions.

The main gate hours are unchanged.

Officials plan to close the Doolittle gate, except for the visitor sign-in office, in November.

Officials aim eventually to build a new visitor center at the Beta site, as well as a large parking lot and vehicle holding area, a dedicated outbound lane, a traffic reject lane and a gatehouse, among other improvements.

Richert said the decision to route commercial vehicles through the Beta Gate was aimed partly at reducing the long lines of vehicles that tended to form outside the Doolittle Gate as they waited for security checks.

It also aids base security because the Beta Gate is equipped with a search pit that allows security personnel to more thoroughly search a vehicle &#8212; including its underside, a feature the Doolittle Gate lacks.