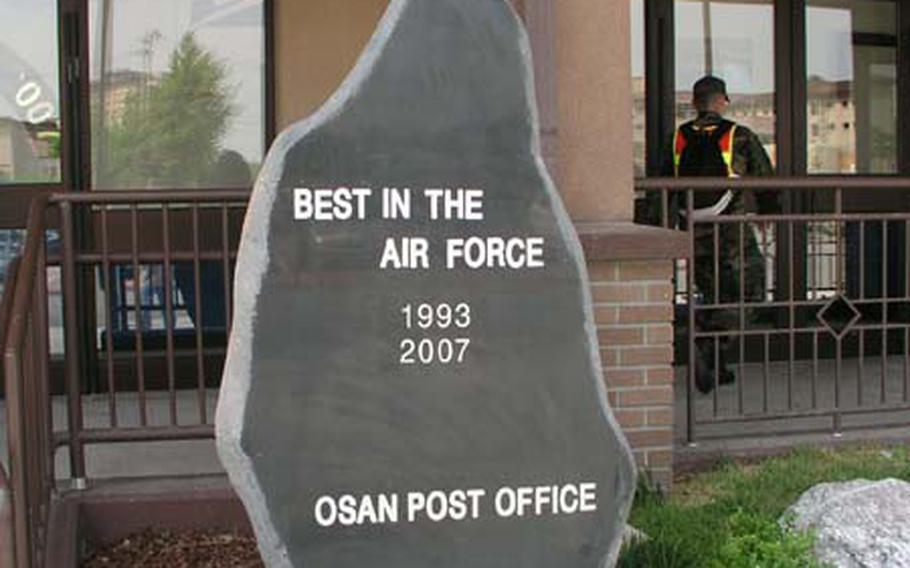 At Osan Air Base in South Korea, officials have erected this stone monument to proclaim that the base post office has been named the best large overseas post office in the Air Force for 2007, an award it also received in 1993. (Franklin Fisher / S&S)

At Osan Air Base in South Korea, officials have erected this stone monument to proclaim that the base post office has been named the best large overseas post office in the Air Force for 2007, an award it also received in 1993. (Franklin Fisher / S&S) OSAN AIR BASE, South Korea &#8212; When they hand out the mail at the Osan Air Base post office, the postal clerks are usually friendly but businesslike, even staid.

But if you&#8217;d been anywhere near the truck loading dock one morning about two weeks ago, you&#8217;d have seen them jumping up and down with excitement.

It was their regular 6:30 a.m. roll call and they&#8217;d just gotten the official word their post office had been named the Air Force&#8217;s best large overseas post office.

"They were excited and proud," said Tech. Sgt. Christina McCarty, official mail manager at the post office. "Jumping up and down, clapping, clapping. It was lots of claps. It was a lot of claps."

The big award was the latest in a series of successes. Osan had already been chosen as the best post office within Pacific Air Forces for 2007. And it had been rated "outstanding" on its annual postal inspection.

But then came the Air Force-wide award. Osan last won that one 15 years ago.

Each year they serve about 11,000 people and move about 4 million pounds of mail. And the facility adds about $3.8 million a year to the U.S. Postal Service coffers through sales of stamps, postal money orders and other services, said Master Sgt. James Register, postal flight superintendent.

He thinks Osan won because of various "initiatives that we&#8217;ve done through the year."

Those initiatives include introduction of an e-mail notification to customers who have packages awaiting pick-up, and the use of digital equipment to more efficiently track mail.

The staff also has put a lot of emphasis on community service.

For example, under "Operation Santa" on Christmas Eve, they kept the post office open until 9 p.m. to distribute a truckload of packages that arrived at 4:30 p.m. from Incheon International Airport.

To memorialize the awards, officials brought in a local contractor to erect a stone monument outside the post office entrance.

Senior Airman Betty McIntyre, 22, of Coffeeville, Ala., is a mail clerk. She was "just pleased and proud" of her fellow members of the postal staff for winning the big one.