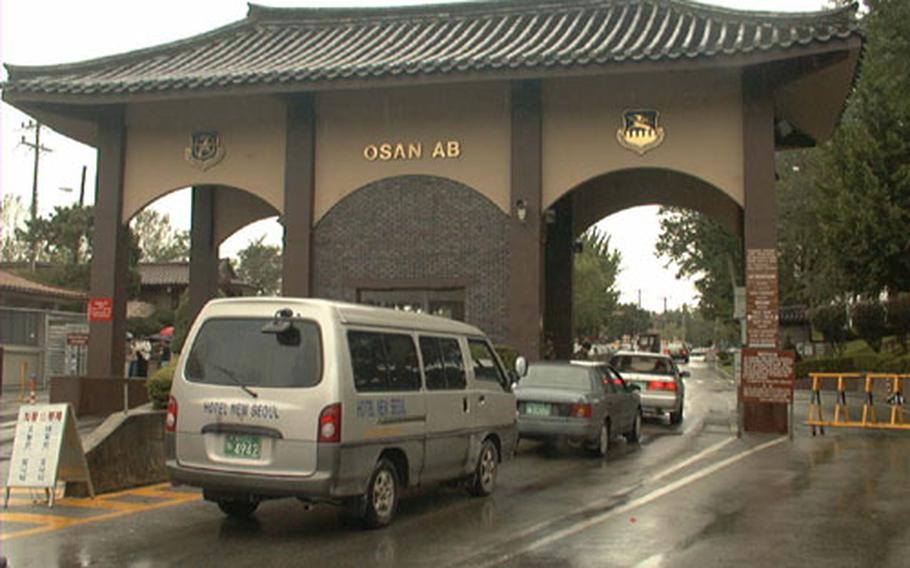 View of Main Gate entrance to Osan Air Base, South Korea. The Air Force will start a year-long construction project later this month to upgrade security at three base gates. (Franklin Fisher / S&S)

OSAN AIR BASE, South Korea &#8212; South Korea&#8217;s largest air base will be closing its gates to vehicles at various times during the next year to allow for installation of new security devices, including pop-up barriers, vehicle-search areas and police dog kennels.

Osan will close its Main and Beta gates starting Sept. 22 for eight months during the $2.5 million construction project.

The main gate will remain open to pedestrians.

&#8220;During the Main Gate closure, everybody&#8217;s going to need to use the Doolittle Gate or the AFOC gate,&#8221; said Capt. Jeff Lin of the 51st Civil Engineering Squadron, the construction management chief.

Once Main and Beta upgrades are complete, the base will reopen them and close Doolittle Gate for four months.

&#8220;Main is the primary access point for most people who work on base,&#8221; said 1st Lt. Tom Montgomery, a base spokesman. &#8220;Doolittle and Beta gates are often used by contractors who come to base to work.

&#8220;The driving force behind this project is to improve our force-protection posture. The new gate will meet or exceed all Air Force protection standards, thus making Osan a safer place to live and work. Osan airmen and those who work here have been asked to make efforts to carpool, walk, ride bikes and be aware of the other base entrances.&#8221;

Seoung Bu Construction Co. will do the work under contract with the U.S. Army Corps of Engineers, Lin said.

Plans for Main and Beta gates call for building roadside turn-offs which will give Security Forces more space to pull over and search vehicles.

&#8220;This project will improve on our current vehicle search pull-off area so that Security Forces airmen can more efficiently and effectively ensure they have control over vehicle searches,&#8221; Montgomery said.

&#8220;I think those tire-shredders speak for themselves,&#8221; Montgomery added. &#8220;They provide a visible deterrent to anybody who would try to break through security.&#8221;

Main and Beta gates will get new guard stations and search dog kennels, he said.

Workers will put in a brick wall at Main Gate and a chain link fence for Beta and Doolittle, Lin said. All three locations will be landscaped.