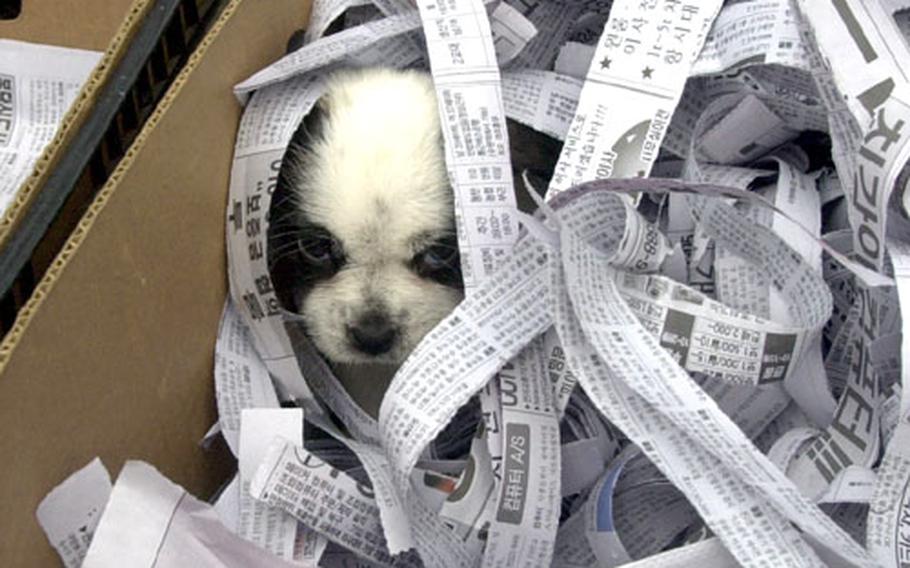 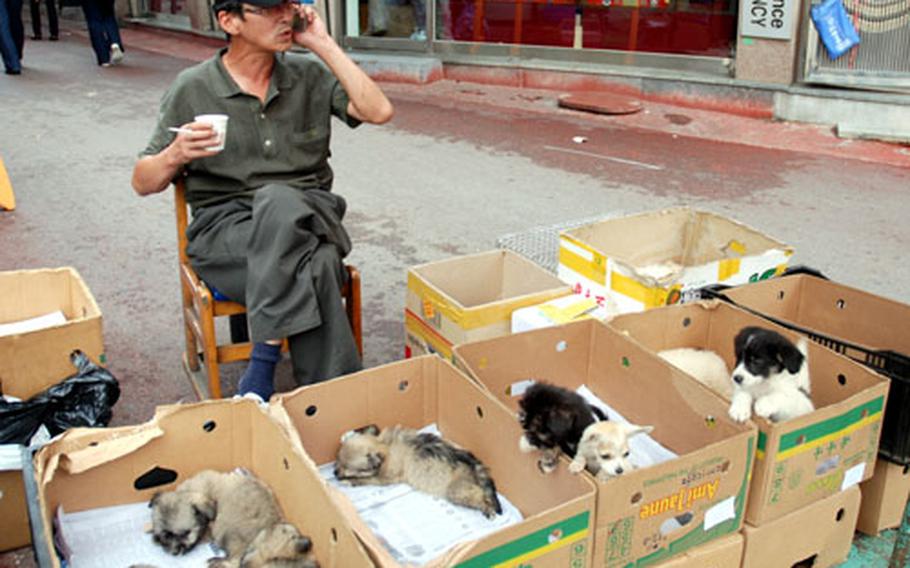 What do puppies and prostitutes have in common?

Not much. But one man&#8217;s sidewalk pet shop near Osan Air Base could, like brothels and some bars, soon be on the list of places U.S. servicemembers aren&#8217;t allowed to patronize.

But Lee, speaking through a translator at his stand, said his customers haven&#8217;t complained that his animals are sick and dying. In fact, people sometimes bring Lee &#8212; nicknamed &#8220;Mr. Doggy&#8221; by his customers &#8212; injured animals and he takes them to a veterinarian for care. The 48-year-old single father has sold animals for six years to supplement his income as a farmer, and keeps a handwritten list of satisfied customers and their addresses in a small notepad.

He said Saturday that he has heard nothing from Osan putting his stand off-limits, and he has no control over how many of his animals ultimately die.

Osan officials are &#8220;strongly advising&#8221; servicemembers to avoid Lee while they gather more information about his business and decide whether to place him off-limits, said 51st Fighter Wing spokesman Lt. John Ross. Veterinarians will inspect the vendor&#8217;s animals as part of that decision-making process, he said.

&#8220;We&#8217;re concerned because these puppies are treated in the same military facilities as our working dogs,&#8221; Ross said. Military officials also want to protect servicemembers&#8217; pets from diseases the dogs might carry.

Osan began considering placing Lee off-limits after workers at the animal clinic say they have been treating an increasing number of sick pets bought outside the base. When they asked owners where their sick pets came from, most had the same answer.

&#8220;They specifically said, &#8216;The market man outside the gate at Osan,&#8217; &#8221; said Danni Armstrong, volunteer coordinator for the Osan Veterinary Treatment Facility and Osan Animal Shelter.

One customer reported that the man tossed yelping puppies into the back of his truck as he was leaving at the end of the day. Another customer said the vendor picked up a puppy in front of his daughter and threatened to hurt it.

Armstrong said she and others have seen the man keep his puppies in boxes with no water, and cats crammed into bird cages.

Dee Springer, whose husband is in the Air Force, said she&#8217;s the only person she knows who has &#8220;had luck&#8221; with the dog she bought from Lee, and the base should consider putting Lee off-limits.

Armstrong said clinic officials treat puppies bought off-base &#8212; not all bought from Lee &#8212; at least once a week, some with diseases like parvovirus or distemper that can be spread from dog to dog or through by germs carried on human hands.

South Korea has animal welfare laws, but they&#8217;re not as strong or well-enforced as those in the United States, Armstrong said, though some South Korean animal rights groups are trying to change that. She said many South Koreans view a pet as a &#8220;cool toy,&#8221; though dogs in rural areas are treated like farm animals and kept in rabbit-type hutches.

Their treatment of animals reflects a clash of Western ideas and traditional practices, she said.

Lee said Americans enjoy touching his animals, which could expose them to illnesses. But he speaks little English and doesn&#8217;t know how to politely tell them to stop, nor does he want to do so and risk developing a bad relationship with the Americans, he said.

If many of his animals are dying, Lee said, he will stop doing business by Dec. 30 and try to find out why.