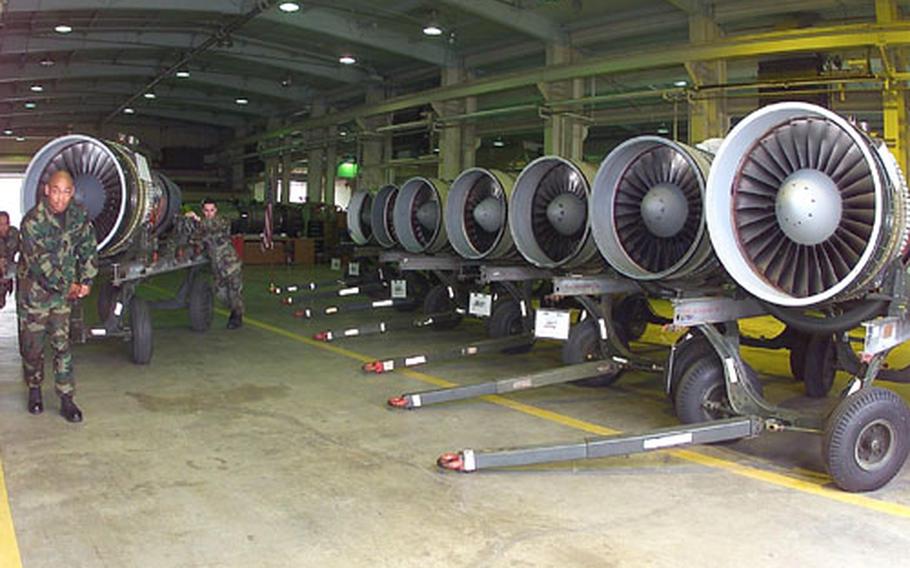 Senior Airman Gueshuin Murray, left, wheels a spare engine into place at the 51st Maintenance Squadron shop on Osan Air Base, South Korea. The squadron this month achieved maintenance magic in getting to full readiness all of its spare TF-34 turbofan engines for the A-10 "Warthog" attack plane. (Courtesy of U.S. Air Force)

TAEGU, South Korea &#8212; To the airmen of Osan Air Base in South Korea, the A-10 attack plane, which flies close-air support for ground forces, is among the world&#8217;s most lethal warplanes.

But the Warthog&#8217;s TF-34 turbofan engines are more than 20 years old and are no longer in production. Spare parts can be hard to come by; Air Force ground crews treasure them.

So recent news that Osan mechanics brought their entire complement of A-10 spare engines to readiness for immediate use, if needed, generated keen satisfaction.

If a Warthog develops an engine problem, its mechanics bring it to the shop, where it&#8217;s replaced immediately with a spare. Since problems can arise at any time, the base is required to have at least four spares always ready for immediate installation.

But the 51st Maintenance Squadron&#8217;s propulsion flight has brought all 11 spares into readiness &#8212; nine at Osan itself and two others at Kadena Air Base in Japan, to be flown to Osan if needed.

&#8220;That almost triples the level that we must maintain,&#8221; said Staff Sgt. Dennis Martin, 51st Maintenance Squadron propulsion flight production supervisor. &#8220;So yes, this is a real accomplishment.&#8221;

Master Sgt. Steve Lenczuk, the 51st Maintenance Squadron&#8217;s propulsion flight chief, explained, &#8220;Most of these engines are pushing, oh, I want to say between 22 and 25 years old, and they have a lot of time, flying hours, on them.

Typically, said Martin, crews will bring an engine needing repair into the maintenance depot &#8220;on a trailer. On their way out they&#8217;ll be hooking up to a good motor and just pull right out, take the place of the bad motor.&#8221;

Lenczuk credited sensible time management with much of the maintenance success. &#8220;You certainly never want to group a bunch of scheduled engine changes at one time,&#8221; he said: It depletes the stock of repaired engines on hand while also overloading the repair depot.

Equally important, Lenczuk said, were the mechanics of Osan&#8217;s 25th Fighter Squadron, who do the day-to-day repair work on the A-10 flight line.