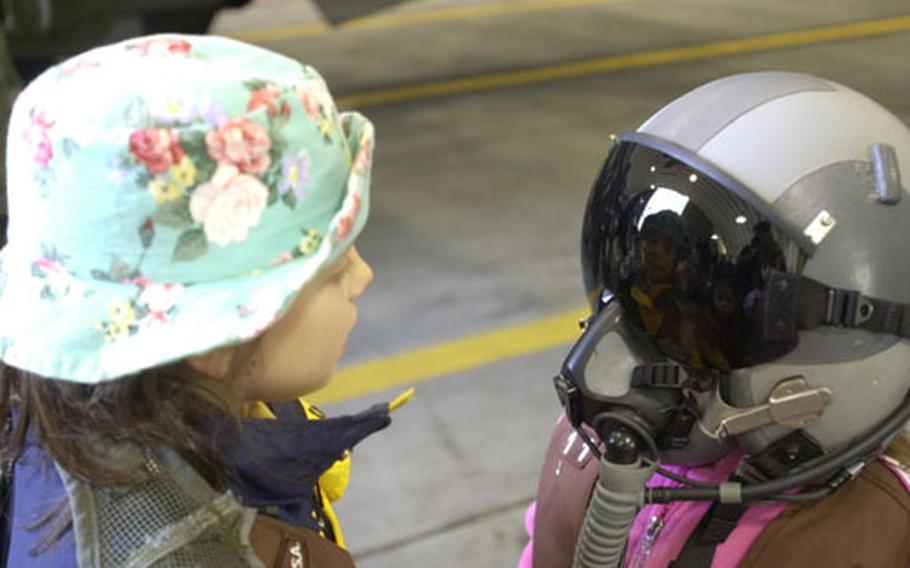 Andi Jones checks out her reflection in the visor of a flight helmet worn by another member of her Osan Air Base Brownie troop. (Joseph Giordono / S&S)

Andi Jones checks out her reflection in the visor of a flight helmet worn by another member of her Osan Air Base Brownie troop. (Joseph Giordono / S&S) 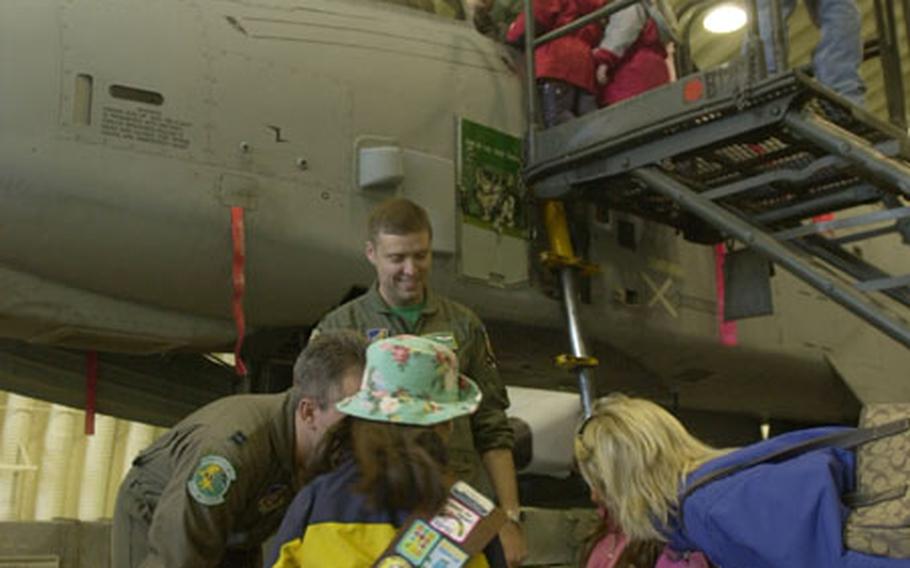 Girl Scouts and Brownies from Osan Air Base get a look in and under an A-10 attack jet Sunday. (Joseph Giordono / S&S)

OSAN AIR BASE, South Korea &#8212; In Air Force 1st Lt. Julie Moore&#8217;s short Girl Scout career, there was only one troop trip that really stuck out in her mind.

On Sunday, Moore and other 51st Fighter Wing pilots hosted Osan Air Base&#8217;s Girl Scouts at a decidedly more exciting event: a private, hands-on tour of F-16 and A-10 warplanes.

On a chilly, clear day at Osan, dozens of young girls looked over, under and inside the jets, which sat parked in a hangar near the 51st Maintenance Squadron. The event&#8217;s purpose, organizers said, was to show the girls a female role model and help them understand a little bit more about the jets they see overhead almost daily.

&#8220;We wanted them to be able to talk to the pilots and hope that this would engage them and help their interest in exploring maths and sciences,&#8221; said Katie Bradeen, one of the event&#8217;s organizers.

&#8220;Plus, they see these jets flying from the base all the time, but they don&#8217;t ever get to see them close up. Maybe this will help explain, as much as possible, why the jets are here and what their mission is.&#8221;

It was the first time the troop organized such a visit, Bradeen said.

Osan&#8217;s Girl Scout troop has about 70 members, Bradeen said, ranging from Brownies &#8212; who are in first, second and third grades &#8212; to Cadets and Seniors, who are in middle and high school. On Sunday, they walked to the hangars in small groups, then met the pilots and toured the planes.

As Moore took one group of girls around an F-16, she told them how a jet engine works and how the jet&#8217;s wings and tail help it maneuver. The girls excitedly stood on their tip-toes, reaching up to touch the wings and underside of the jet. When sets of girls switched planes, they parroted some of the teasing each set of pilots made about the other group.

Later, another Brownie leaned in close to 1st Lt. David Heinitz as he showed off the cockpit of an A-10 Warthog.

After checking out the jets, the girls retreated to the squadron ready room, where they checked out aviator survival gear, snacked on punch and cookies and gawked at one of the squadron mascots, an enormous lizard in a glass and wood terrarium.

&#8220;I&#8217;m glad they got to see something cooler than I did. This is definitely an improvement on that,&#8221; Moore said, reflecting on her most vivid scouting memory.