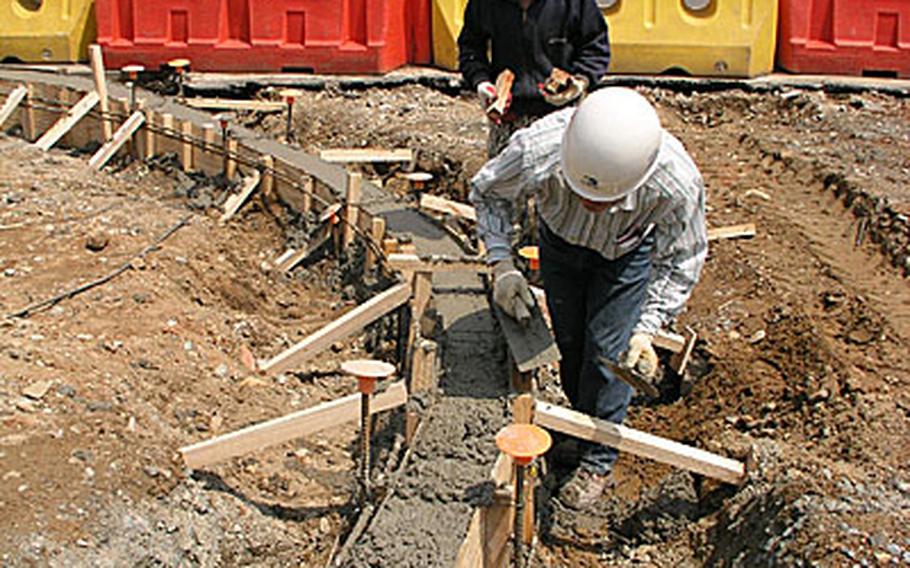 At Osan Air Base in South Korea Wednesday, where a former base exchange building will be torn down to make way for a new community activities center and enlisted club. (Franklin Fisher / S&S)

OSAN AIR BASE, South Korea &#8212; A new enlisted club and recreational center are in the works at Osan Air Base, officials said Tuesday.

The $4.5 million community activities center is set for completion in June 2008 and the enlisted club in August 2009, said Capt. Charles Fletcher, design chief with the 51st Civil Engineer Squadron.

The center will go up on the site occupied by Building 920, the former base exchange, adjacent to the base library. The enlisted club will be built behind the new center.

The activities center will house a large computer room, telephones, two game rooms, a lounge, a platform stage, three music rooms, a wireless hub, and a retail and resale store. It will be a one-story, 13,165-square-foot building.

The Shin Woo construction company is carrying out the project under contract with the U.S. Army Corps of Engineers&#8217; Far East District.

The $13.9 million enlisted club will replace the aging Challenger Club, to be demolished later. The Challenger Club was built in 1965 and has had roof leaks and other maintenance problems.

Even after the Challenger is demolished, the base will continue to have two enlisted clubs &#8212; the one slated for construction and the existing Mustang Club.

The new club will be a one-story structure with a partial second story for office space. It will feature a multi-purpose room for award presentations, ceremonies and unit social and other functions. It will accommodate 600 people seated or 1,000 standing.

The other part of the club will &#8220;be your typical bar and lounge,&#8221; with pool tables, karaoke and other amenities, Fletcher said.

The club is still being designed, but officials expect to name a contractor by early next year.

To make room for the two structures, workers will demolish Building 920, which served as the base exchange until 2004 when a new base shopping mall and BX complex opened nearby. Workers have fenced off the site, including most of a long parking lot outside the building.

The project means the base will lose 32 parking spaces. The loss will be offset when a nearly completed 400-space parking garage opens, officials said. Additionally, a 270-space garage is planned for what is now part of the shopping mall parking lot.

Also lost to the project is the Sky coffee stand that did a steady business with servicemembers, taxi drivers, and civilians from nearby office buildings.