Ordnance disposal team will stay on Okinawa, not deploy 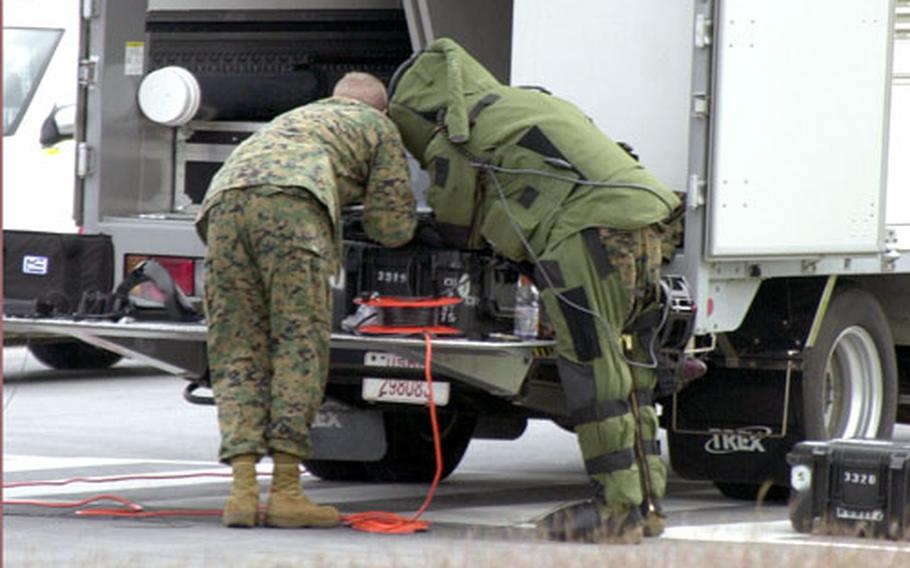 Members of Marine Wing Support Squadron 172 look at an X-ray of a suspicious package, which turned out to be a cooler containing Powerade and water, in the parking lot of the Camp Foster Exchange in November 2004. A nondeployable base explosive ordnance disposal team recently was formed to handle situations such as this, so other EOD teams can deploy with a full complement of Marines. (Fred Zimmerman / S&S)

CAMP FOSTER, Okinawa &#8212; For the first time on Okinawa, the Marine Corps has established an explosive ordnance disposal team that&#8217;s to stay put on the island.

The team was formed in part to ensure that when other EOD teams deploy that all the hardware and manpower needed locally would continue to be on hand, according to Jay Farmer, Marine Corps Base Operations and Training deputy assistant staff chief.

He said that while in concept the base EOD team won&#8217;t deploy, its members could occasionally plug in where needed elsewhere.

The base team&#8217;s current head, Master Gunnery Sgt. Tim Mecca, added that while members could deploy, the team&#8217;s equipment would not. The team now has four members but is set up to have nine: one officer and eight enlisted.

Mecca said the new team can respond anywhere from Camp Kinser north to Camp Gonsalves &#8212; the Jungle Warfare Training Center. But if EOD disposal were needed there, he said, closer EOD teams would respond and the base team would follow on.

The team&#8217;s main responsibility is anti-terrorism and force protection, Mecca said. But it also supports the Japanese Ground Self Defense Force and Okinawa Prefectural Police with training and use of ranges.

Another big part of the team&#8217;s job, according to Col. Lee Ragland, MCB Operations and Training assistant staff chief, is investigating suspicious packages and dealing with unexploded ordnance, which can vary from World War II remnants to current-day munitions on the ranges.

Ragland said the challenge of dealing with older ordnance is the lack of information. The team occasionally encounters WWII-era explosives &#8220;that we don&#8217;t have publications on,&#8221; he said. &#8220;It can be just as lethal now as it was back then.&#8221;

The unexploded ordnance makes &#8220;Okinawa more interesting, especially since at one time it was a battlefield,&#8221; Mecca said.