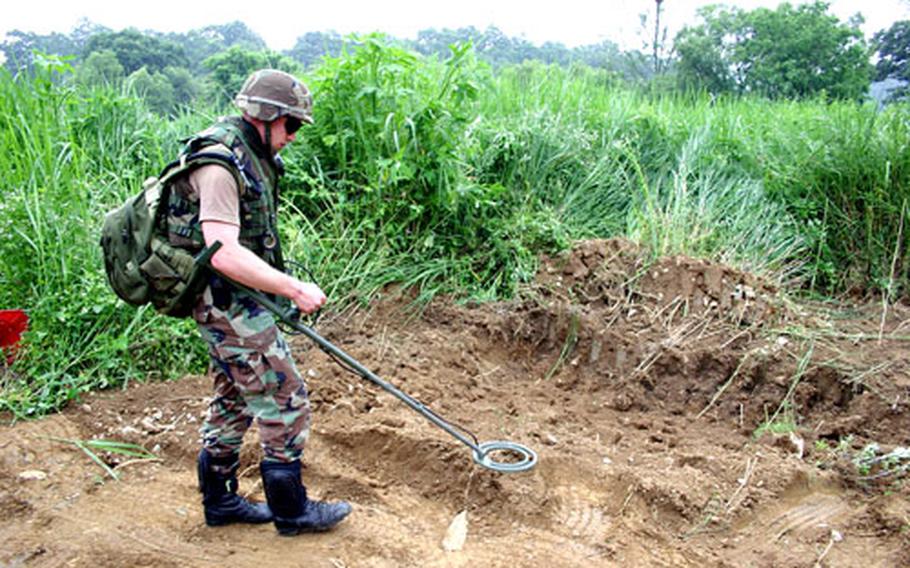 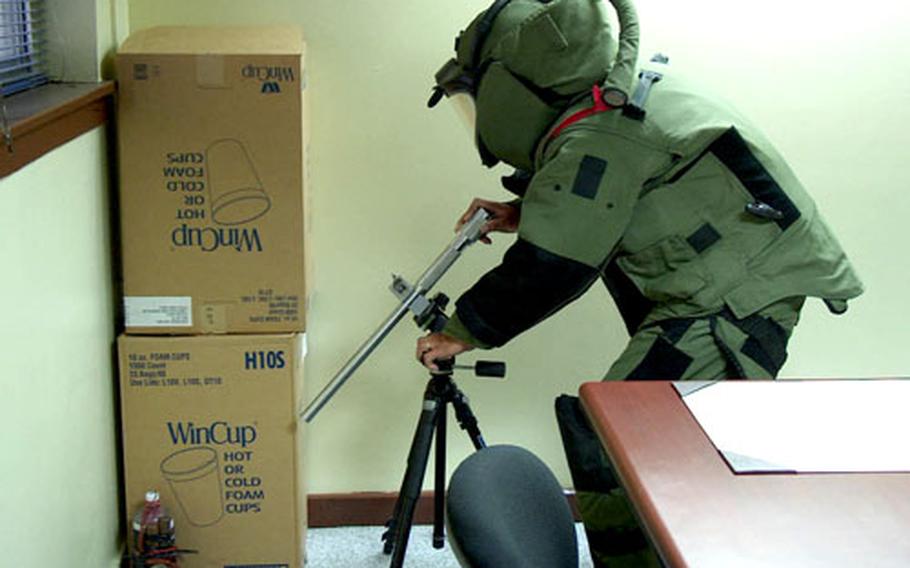 An EOD technician positions a tool while investigating an improvised explosive device (IED) left in an office during a training scenario. (U.S. Army photo)

YONGSAN GARRISON, South Korea &#8212; The unit that deals with suspicious packages, dud grenades and leftover wartime ordnance around the peninsula moved to a new location this week.

Although the unit now is geographically farther from the training ranges where it often works, a better road system means they can get to the Area I ranges faster, said 1st Sgt. Samuel Santiago.

Technicians don&#8217;t take enemy bunkers in battle like infantrymen do, but they protect the troops and their families at home, he said.

EOD technicians clear unexploded rounds and grenades used in training, respond to bomb threats and suspicious packages and clear any Korean War-era ordnance that surfaces on an installation.

Every year, construction &#8212; particularly on training ranges &#8212; and summer monsoon rains unearth plenty of work for the unit.

The unit also sends teams to assist with distinguished visitors &#8212; including Secretary of State Condoleezza Rice, who is visiting Seoul this week &#8212; and to accompany remains recovery missions in the region to remove ordnance found with any remains.

Being in South Korea gives the technicians unique opportunities for real-world experience. In the States, O&#8217;Brien said, units will spend nearly all their time training, then usually deploy.

In South Korea, there&#8217;s a constant mix. The training includes working with the South Korean army and maintaining skills needed in Iraq and elsewhere. The company has 22 members, including four Korean Augmentees to the U.S. Army and one female technician.

The company&#8217;s move to Yongsan was planned as part of the gradual move south for all USFK units. Eventually, when the rest of the Army goes south, the unit will move to Camp Humphreys, Santiago said.

The EOD unit currently is recruiting new soldiers. A soldier from any job specialty who meets several criteria can become an EOD technician.

Soldiers must have a 104 or better on the general mechanics portion of the Armed Services Vocational Aptitude Battery. They also have to be eligible for a top-secret clearance, since one of the company&#8217;s jobs is accompanying VIPs &#8212; including the president. There also are strict medical restrictions.

After a lengthy interview, soldiers will be asked to try out the 70-pound bomb suit and chemical protective suits to make sure they can function in the gear.

Once they pass the initial assessment, they apply for a place in joint-service Naval School Explosive Ordnance Disposal at Eglin Air Force Base, Fla. &#8212; the school for all EOD technicians in the Defense Department.

When they&#8217;re assured a position at Eglin, soldiers come to the unit for on-the-job training.

The job offers demolition pay, and other bonuses might be available. Check with the unit or a career manager for information.