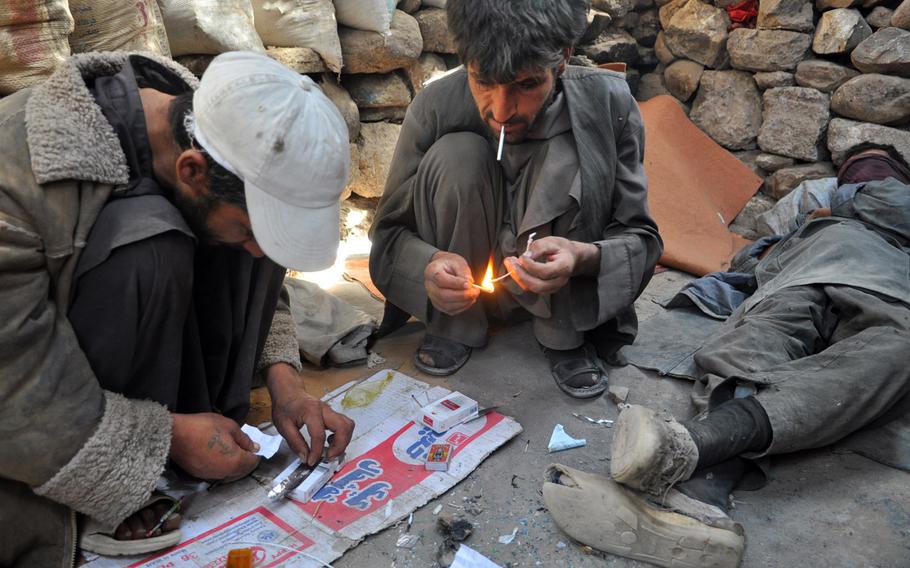 Buy Photo
Men prepare heroin in Dahne Kamarkalagh, a colony of drug addicts on the outskirts of Herat, a city in western Afghanistan. Though Herat has been more prosperous and peaceful than much of the rest of the country, it has an estimated 60,000 to 70,000 drug addicts, most hooked on heroin and other opiates. (Heath Druzin/Stars and Stripes)

Buy Photo
Men prepare heroin in Dahne Kamarkalagh, a colony of drug addicts on the outskirts of Herat, a city in western Afghanistan. Though Herat has been more prosperous and peaceful than much of the rest of the country, it has an estimated 60,000 to 70,000 drug addicts, most hooked on heroin and other opiates. (Heath Druzin/Stars and Stripes) Buy Photo
Dahne Kamarkalagh, a colony of drug addicts on the outskirts of Herat, a city in western Afghanistan. (Heath Druzin/Stars and Stripes) Buy Photo
Discarded medicine bottles near Dahne Kamarkalagh, a colony of drug addicts on the outskirts of Herat, a city in western Afghanistan. (Heath Druzin/Stars and Stripes) Buy Photo
A collection of anti-drug posters at Herat province???s counter-narcotics headquarters, in western Afghanistan. Long a big producer of poppy, the flower that provides the main ingredient for heroin, Herat has largely eradicated drug cultivation, but still has a large population of heroin users. (Heath Druzin/Stars and Stripes) 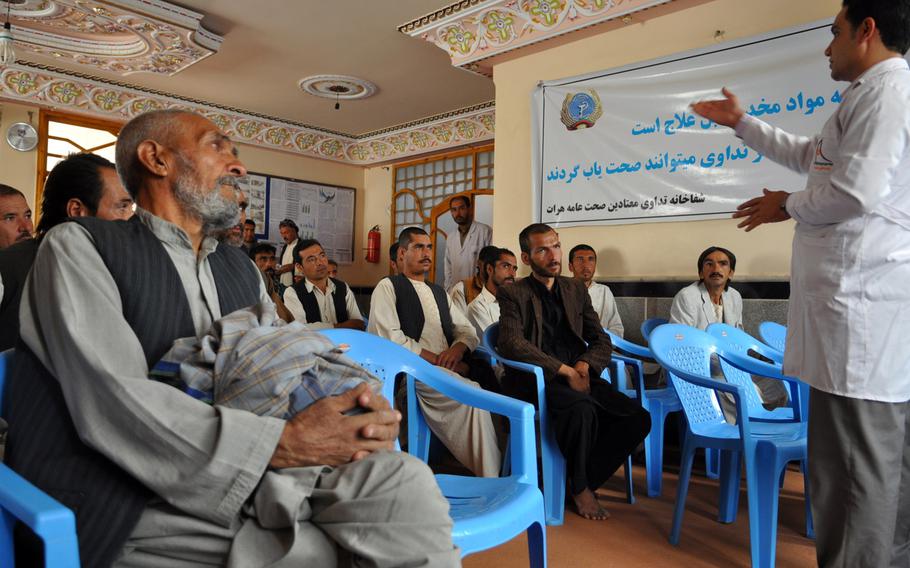 Buy Photo
A doctor leads a motivational session for drug users at a rehabilitation clinic in Herat, Afghanistan. The western city is struggling with a major drug problem and has just eight clinics to serve an estimated 60,000 to 70,000 addicts. (Heath Druzin/Stars and Stripes) 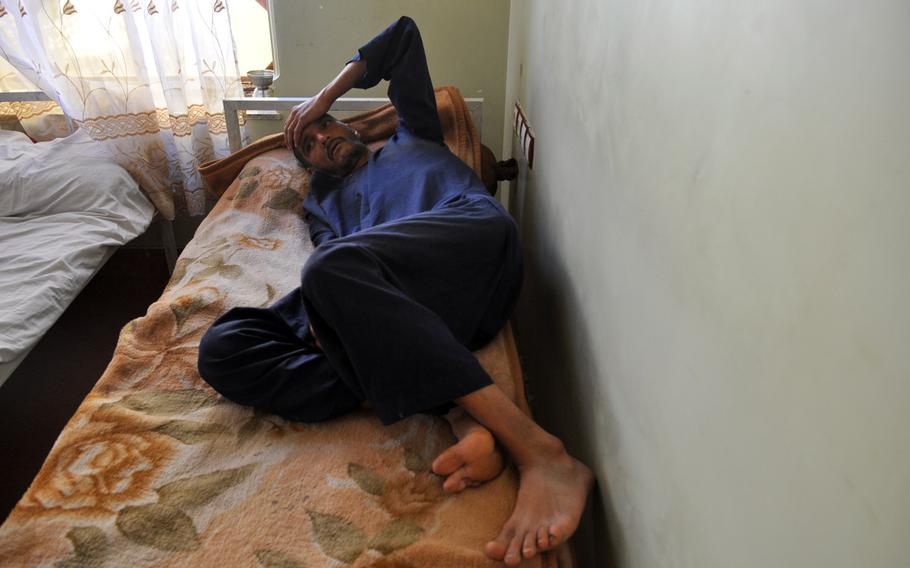 Buy Photo
A heroin addict deals with the effects of withdrawal after checking into a drug rehabilitation clinic in Herat, Afghanistan. (Heath Druzin/Stars and Stripes) Buy Photo
Najibullah, right, says he started using heroin 25 years ago while working in Iran. His story is similar to that of many Afghans, tens of thousands of whom travel each year to Iran, where heroin is cheap and readily available. (Heath Druzin/Stars and Stripes) 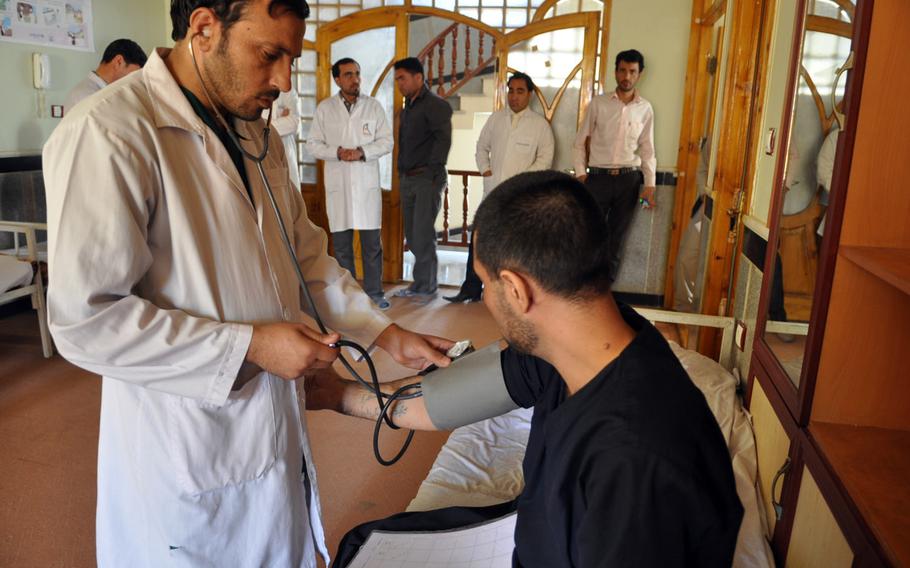 Buy Photo
A doctor checks up on a patient at a drug rehabilitation center in Herat, Afghanistan. Government officials and doctors say the province???s counter-narcotics and drug treatment programs are woefully underfunded. (Heath Druzin/Stars and Stripes) Buy Photo
Patients play a game at a drug rehabilitation clinic in Herat, a city in western Afghanistan. The 45-day in-patient program includes heavy doses of motivational speaking and religion, but addicts must quit cold turkey, as no methadone is allowed. (Heath Druzin/Stars and Stripes) 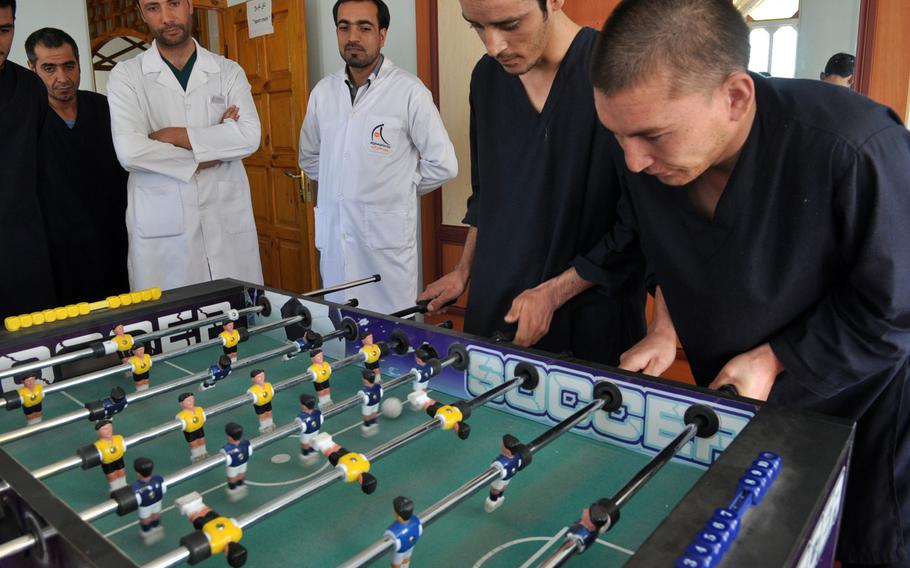 Buy Photo
Patients play foosball while under the watch of doctors at a drug rehabilitation clinic in Herat, a city in western Afghanistan. The 45-day in-patient program includes heavy doses of motivational speaking and religion, but addicts must quit cold turkey, as no methadone is allowed. (Heath Druzin/Stars and Stripes) 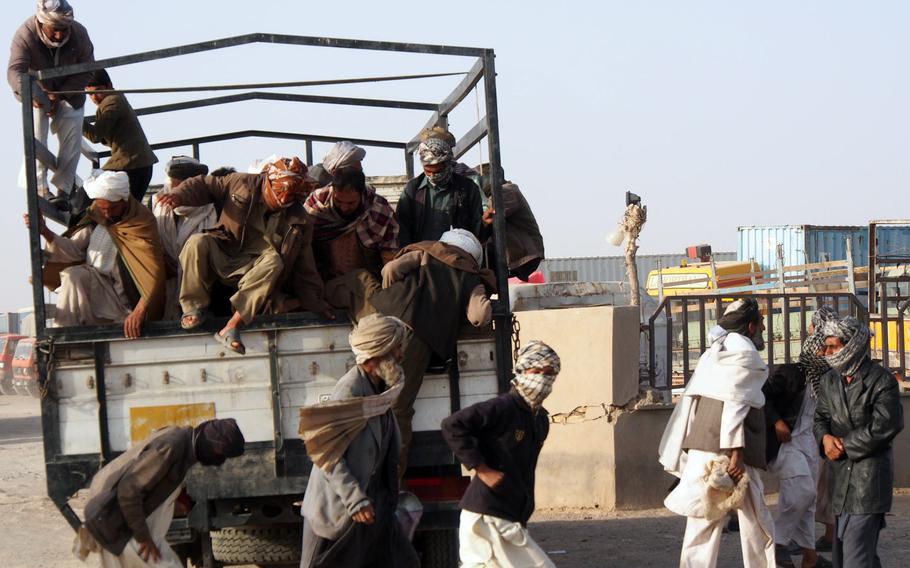 Buy Photo
Migrant workers get ready to cross from Afghanistan to Iran. Tens of thousands of workers cross into Iran each year to find work and many come back addicted to heroin and other opiates. (Heath Druzin/Stars and Stripes) Buy Photo
A man is fingerprinted at the border crossing between Iran and Afghanistan. Tens of thousands of migrant workers cross each year into Iran, many returning to Afghanistan addicted to heroin. (Heath Druzin/Stars and Stripes)

HERAT, Afghanistan — Within sight of the clean streets and historic buildings of this thriving western city, the rocky landscape sprouts a collection of low-slung hovels with tarp roofs and crudely built stone walls that look liable to collapse at the slightest tremble of the earth. Hollow-eyed men in filthy clothes drift listlessly across a barren expanse littered with glass medicine bottles and tightly wound twine. This is Dahne Kamarkalagh, a sort of Junkie Town West and ground zero for Afghanistan’s increasing heroin problem.

Under the makeshift roofs, just high enough to squat over aluminum wrappers dusted with white powder, grubby young men smoke heroin or sleep off their highs.

Despite more than a decade of expensive international efforts aimed at reducing opium production in Afghanistan, the country still accounts for 75 percent of worldwide production, and the area of opium cultivation has grown and continues to expand, according to the United Nations Office on Drugs and Crime.

Long an exporter of poppy, the sap of which is used to make heroin, Afghanistan has in recent years become home to ever greater numbers of users. Colonies of addicts have sprung up in cities like Kabul, Jalalabad and Herat. While Herat has been a bastion of relative calm and prosperity in a country still wracked by an ongoing war, its proximity to Iran, coupled with its own history of poppy cultivation, has left it with one of the biggest drug problems in Afghanistan, with an estimated 60,000 to 70,000 addicts, according to government officials.

One bright spot in Herat’s fight against opium has been the success of saffron, a spice that can fetch thousands of dollars per kilogram and is one of the few crops that competes with the profits of opium cultivation. In 2013, Herat province produced slightly more than 6,600 pounds of saffron, harvested from about 1,400 acres of land, and almost no poppy, according to government figures.

But even that program has hit a major snag: farmers struggle to get their product to potentially lucrative markets like India and the United Arab Emirates because of a lack of flights from Herat and difficulties in getting businessmen visas and export licenses, Herat provincial Governor Sayed Fazlullah Wahidi said.

“The problem is the market for saffron — today we have no market,” he said.

Herat’s heroin highway begins in Iran, where tens of thousands of impoverished Afghans go to seek work every year. Grinding labor, long hours and the sorrow of being separated from families, coupled with cheap, easily available heroin, lead many to start using. Some addicts say their Iranian employers even encourage drug use to create a more pliable workforce.

The drug trade runs both ways, down 80 miles of asphalt that lead from Herat to the Iranian border. Opium comes from Afghanistan, but precursor chemicals, used to produce heroin, also come from Iran for use in labs deep in Taliban-held territory, according to Herat province counternarcotics chief Ghulam Jailani Daqiq. Daqiq said more than 40 percent of the illegal drugs smuggled out of Afghanistan crosses the Iranian border, then continues on to Turkey and Europe.

The human cost of the trade, he said, can be seen in the migrant workers who often come back to Afghanistan broke and hooked.

“Unfortunately, they went to Iran to find work, and the only thing they brought back was addiction,” Daqiq said.

Funding has not kept pace with the problems, according to local doctors and government officials. Addicts face long waiting lists to get into treatment programs in Herat province, which has just 275 beds in eight detoxification clinics. There is also a lack of qualified doctors. Part of the problem is a centralized Kabul administration far removed from distant provinces like Herat, Wahidi said.

The lucky few who get treatment face a tough 45-day regimen, quitting cold turkey and dealing with the horrors of withdrawal with only basic medicine to treat symptoms (Afghan clinics do not use methodone). The program is followed up with six months of outpatient treatment.

At a 50-bed clinic down a dirt side street in Herat, recovering addicts, almost all of whom were using heroin or other opiates, are put through a combination of motivational meetings, boot camp and detox. Many of the basic duties at the clinic, such as cooking and cleaning, are divided up among patients, all of whom are confined to the premises except for tightly supervised weekly outings into the city.

They wear the same navy blue tunics, all sport short haircuts (discipline, routine and a neat appearance are pillars of the treatment), and most have similar personal stories. A search for a living in Iran turned into a nightmare of addiction.

On the first floor, newer patients still dealing with withdrawal symptoms shuffle through the neatly kept rooms, getting checkups and resting much of the day. On a recent visit, one brand-new arrival lay curled on a bed, staring at the wall, seemingly paralyzed by withdrawal. The atmosphere lightens on the upper floors, where patients have made it past withdrawal and are in the latter stages of inpatient treatment — they do chores and play foosball in a game room.

Part of the treatment is getting addicts to speak openly about their struggles. Najibullah, a 46-year-old father of 12, said he used heroin for 25 years before coming to the clinic. He went broke and sold his property and his family fruit farm to feed his drug habit.

Despite the painful stories there is optimism among the patients close to completing the inpatient care. Abdul Wahed, 40, has been using for 15 years but says he is determined to stay clean when he walks out the clinic doors: “My whole family was suffering because of me, and I am committed and sworn to give it up and give us a happy life.”