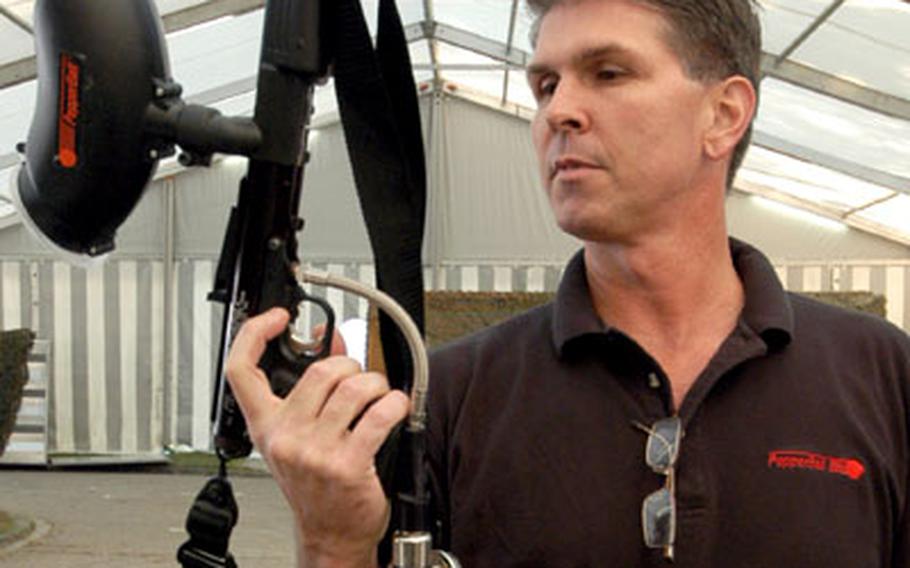 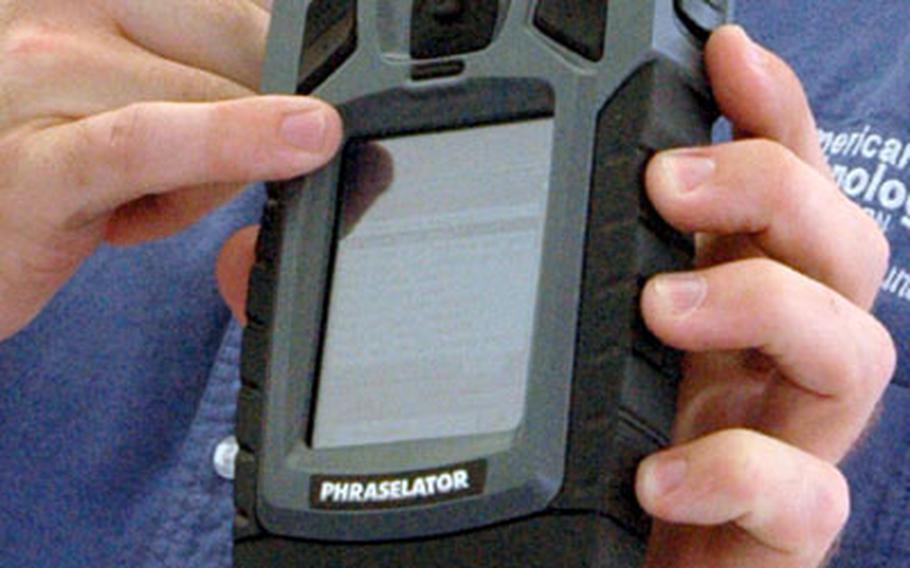 Ryk Williams of American Technology Corporation shows off the Phraselator, a device that can translate and broadcast commands and questions, like "do you have a weapon?" in up to 50 languages. (Michael Abrams / S&S) 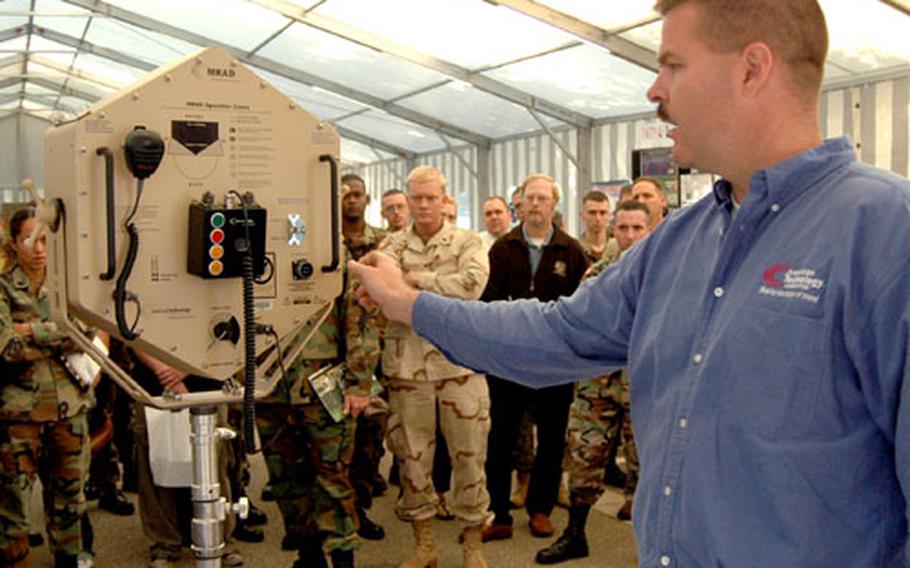 Ryk Williams shows off a MRAD or medium range acoustic device at Land Combat Expo 2005. The MRAD can be mounted on a Humvee, and like its big brother, the long range acoustic device emits a high-pitched sound at excruciating decibel levels that can flush snipers out of buildings, or make would-be suicide car bombers stop to cover their ears. (Michael Abrams / S&S) 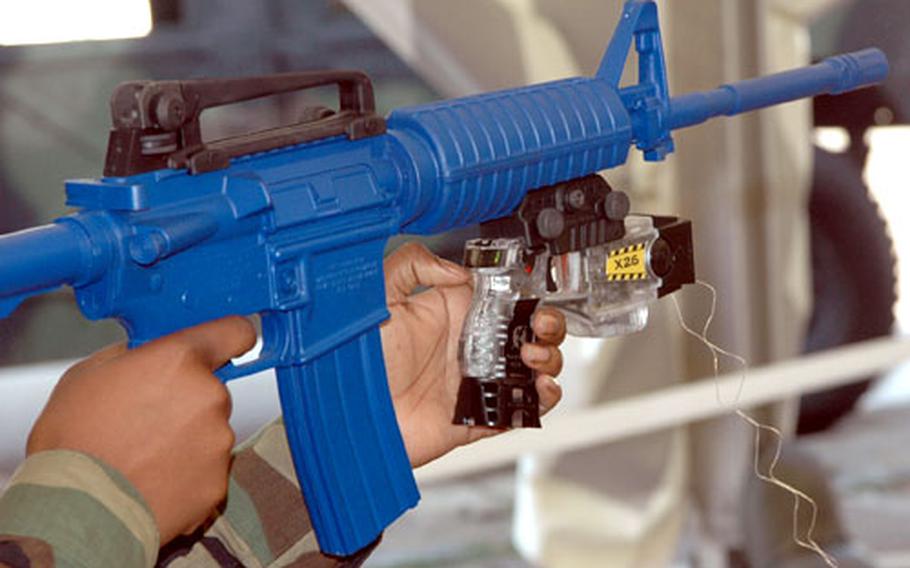 A Taser X26 non-lethal weapon, attached to a mock-up of an M-4 rifle. The Taser immobilizes the target through electric shocks. (Michael Abrams / S&S) 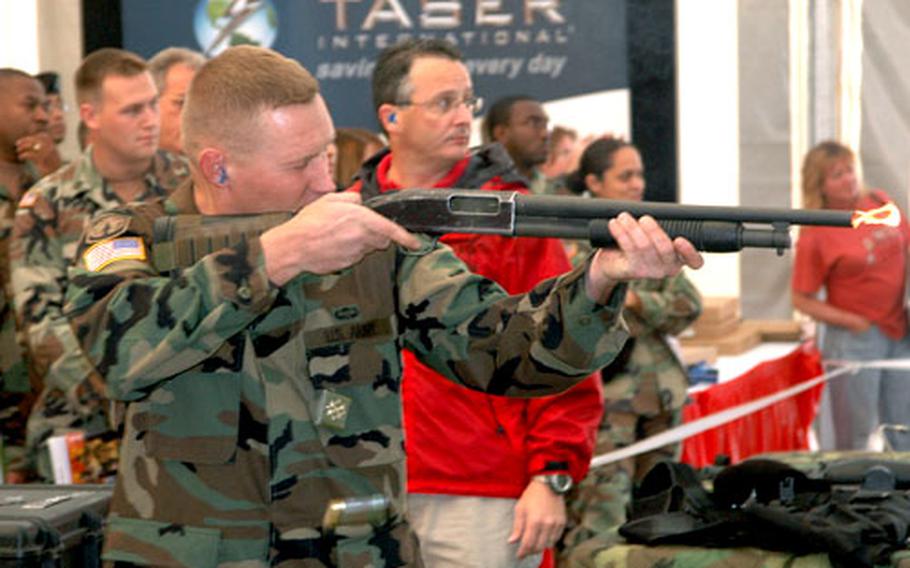 Sgt. Paul Meyer, of the 529th Military Police Company out of Heidelberg, fires a non-lethal rounf out of Mosburg 500A shotgun. (Michael Abrams / S&S)

HEIDELBERG, Germany &#8212; Compared with the evolution of conventional weapons from sharp sticks to big bombs, a new generation of nonlethal weapons is rapidly approaching the gee-whiz factor of fantasy.

Imagine a high-pitched sound so focused and shrill that it will make an insurgent sniper do anything to escape it, including exiting the building where he&#8217;s shooting at American soldiers. Imagine a goo so slippery that, sprayed on a bridge, no vehicle can cross &#8212; sparing a commander the strategic no-win of blowing it up to deny the enemy.

Imagine lasers so powerful and so precisely targeted they can stop a vehicle by boring into the dashboard. Imagine a silent, invisible beam of directed energy that disperses rioters by exciting water molecules on a layer of skin 1/64th of an inch deep.

Like Capt. James T. Kirk&#8217;s phaser, Active Denial Systems can be set low enough to cause severe pain, but no injuries, at ranges greater than small arms, said Roberts, capabilities and concepts officer for the Department of Defense&#8217;s Joint Non-Lethal Weapons Directorate.

Mention &#8220;nonlethal weapon,&#8221; and most people think of rubber bullets for conventional arms and tear gas, said Roberts. In reality, it&#8217;s the gee-whiz side of the military, with its advocates this week at U.S. Army Europe&#8217;s Land Combat Expo at Patrick Henry Village predicting much broader acceptance over the next two years.

But there are combinations that cover most needs, Damm added.

EUCOM officials started an assessment &#8212; expected to be finished later this year &#8212; of nonlethal needs, Damm said. U.S. military services have well-developed nonlethal capabilities, such as pepper-ball guns that fire pepper spray and mark agitators, he said. The goal now is to integrate those capabilities at the EUCOM level.

There are complications and dichotomies.

In an era when Humvees basically are weapons platforms for everything from heavy machine guns to flare launchers, does a soldier have a place to put another weapon?

But nonlethal weapons choices on a mission may have prevented some riots and demonstrations in Iraq from escalating, he said.

&#8220;Nonlethal&#8221; is a concept, not a certainty. Many of the paintball-like weapons, as well as beanbags and rubber bullets with 500-foot-per-second velocity, are lethal at close range.

But more and more, directed beams of hyper light and sound are replacing flying rounds.

When the LRAD isn&#8217;t taking the starch out of miscreants, it can broadcast messages, when teamed with a language translator, in 50 languages up to 1,500 yards, Williams said.