Buy Photo
Mark Noah of History Flight, at the National Press Club in Washington, D.C., May 23, 2014. (Joe Gromelski/Stars and Stripes)

Buy Photo
Mark Noah of History Flight, at the National Press Club in Washington, D.C., May 23, 2014. (Joe Gromelski/Stars and Stripes) 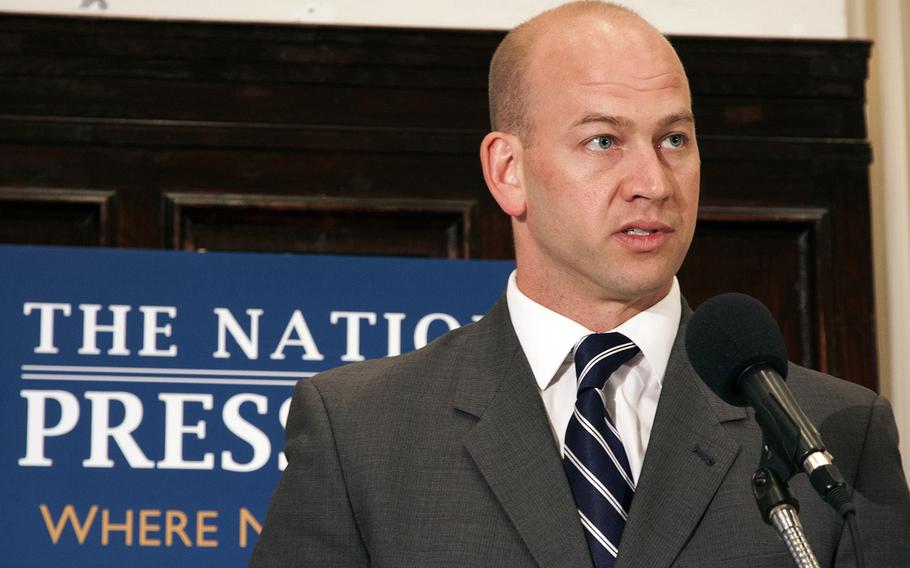 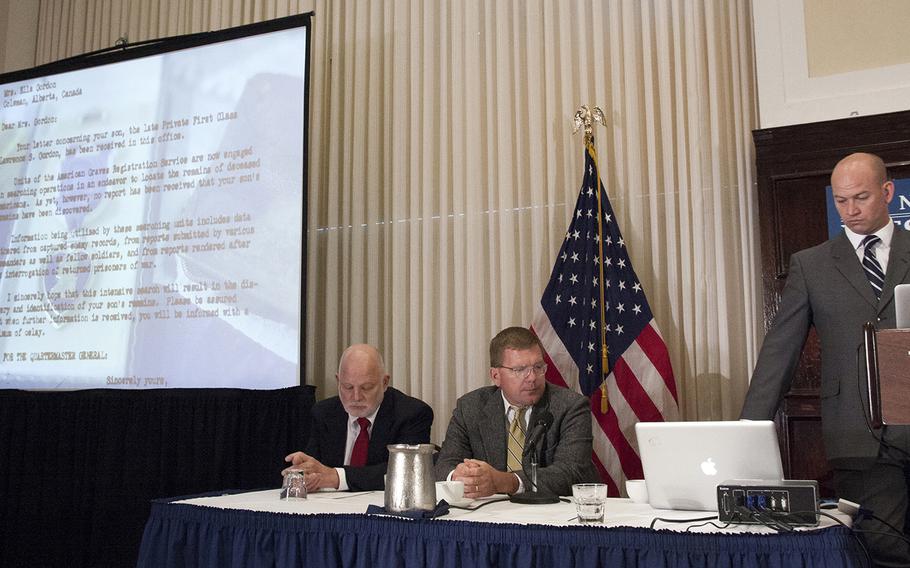 Buy Photo
Filmmaker Jed Henry, right, shows a letter from the case of Pfc. Lawrence Gordon as John Zimmerlee, left, and Mark Noah listen during the POW-MIA Awareness Conference at the National Press Club in Washington, D.C., May 23, 2014. (Joe Gromelski/Stars and Stripes) Buy Photo
John Zimmerlee, a historic researcher with the Korea and Cold War POW-MIA Network, looks at the video presentation and Mark Noah of History Flight listens as Ed Huffine of Bode Technology speaks during a conference on POW-MIA awareness at the National Press Club in Washington, May 23, 2014. (Joe Gromelski/Stars and Stripes) 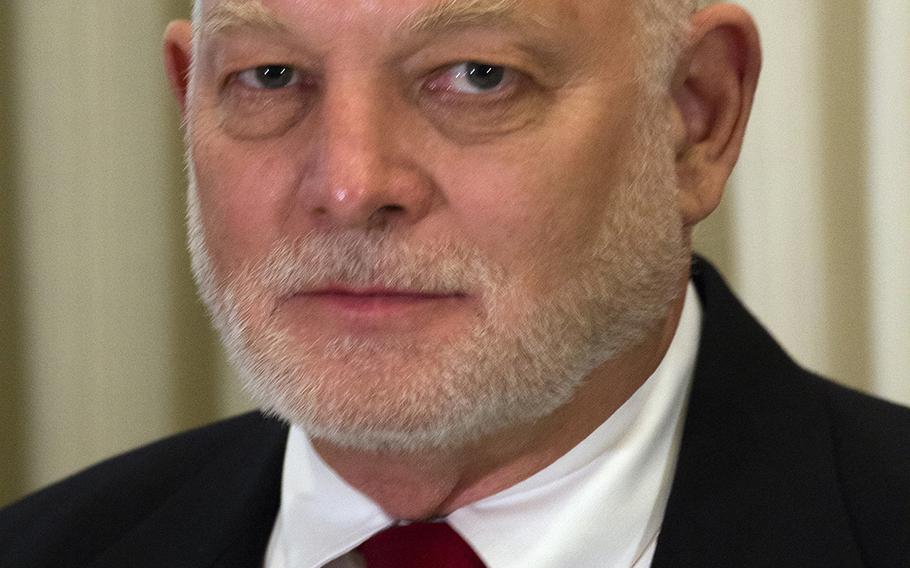 Buy Photo
John Zimmerlee, a historic researcher with the Korea and Cold War POW-MIA Network, at the National Press Club in Washington, D.C., May 23, 2014. (Joe Gromelski/Stars and Stripes) Buy Photo
Ed Huffine, vice president of humanitarian projects for Bode Technology, listens to another speaker at a POW-MIA awareness conference at the National Press Club, May 23, 2014. (Joe Gromelski/Stars and Stripes)

WASHINGTON — On Tarawa, bodies of fallen Marines, still wrapped in ponchos or wearing helmets, were just below the island’s trash-ridden top soil.

About 10,000 bones, hundreds of pounds of gear and dozens of dog tags were recovered over the past two years on the densely developed Pacific island, generations after a bloody World War II battle there, said Mark Noah, whose private group, History Flight, initiated the search effort.

The remains were so numerous and buried in such shallow ground that in one servicemember’s grave site “a local trash pit had been dug right into his chest,” Noah said.

Tarawa is not an isolated instance. Opportunities to finally identify America’s war dead — including some who have been missing for more than 70 years — and return them to family members abound as the Department of Defense prepares to overhaul its troubled national recovery efforts, according to advocates for missing servicemembers who gathered for a conference in Washington, D.C. Friday.

More than 83,000 servicemembers are still listed as missing from War World II, the Korean War, Vietnam, Iraq and other conflicts, according to the Defense POW/Missing Personnel Office.

Advances in DNA analysis, the use of global positioning software and aerial drones, and clues gleaned over decades from historical records are already pointing the way toward closure for scores of those servicemembers, speakers at the POW-MIA Awareness Conference said.

“Many hundreds or thousands of cases remain unknown and could easily be solved with today’s technology,” Noah said.

Noah used a drone to snap photos of Tarawa and GPS programs to match up archive photos and maps to find remains. He and colleagues pored over the history of the battle and documents connected to the burial area.

Meanwhile, nuclear DNA tests, pioneered 20 years ago during the war in Bosnia-Herzegovina, now allow researchers to identify U.S. servicemembers from bone fragments, increasing the ease and likelihood that those who perished decades ago will be found, said Ed Huffine, vice president of humanitarian projects for Bode Technology, a leading forensic testing company.

Huffine said a “quantum leap” is underway in DNA testing, providing “a very powerful tool that will be able to assist in the identification of loved ones.”

So, it should be a good time to find the missing. Instead, government efforts to close those cases have sputtered and drawn intense criticism over the past year.

Stars and Stripes found that the Joint POW/MIA Accounting Command, a DOD agency that conducts global operations to recover tens of thousands of missing remains, and DPMO officials ignored those leads, prematurely declared missing servicemembers deceased, and argued against examining remains in government custody that appeared to be identifiable.

JPAC was so incompetent and mismanaged that it risked descending from “dysfunction to total failure,” according to an Associated Press report last summer.

Defense Secretary Chuck Hagel has ordered the Pentagon to restructure the effort to recover missing servicemembers and consolidate JPAC and DPMO into a single agency that handles all accounting, research and field operations.

On Thursday, the Senate Armed Services Committee backed the changes and approved an amendment sponsored by Sen. Claire McCaskill, D-Mo., to create a new accounting command with one federal official in charge. McCaskill’s office called it a “first step” in overcoming the deep problems uncovered in JPAC and DPMO over the past year.

The overhaul may mean more attention for the cases that have been delayed or overlooked.

JPAC has said it is trying to press ahead and meet a congressionally mandated 200 identifications per year. The agency is now focusing on the exhumation of 400 World War II sailors buried in Hawaii as unknowns after dying aboard the USS Oklahoma, though the Navy has opposed disturbing the graves.

Hundreds might still be unidentified on Tarawa — Noah said his group’s examination of National Archive records puts the death toll at 1,260 instead of the official count of 1,009.

The remains of hundreds more Korean War missing in action might be even closer to home, said John Zimmerlee, historic researcher with the Korea and Cold War POW-MIA Network.

After working several weeks per year for about 20 years, Zimmerlee said his amateur research discovered that remains of 355 unidentified servicemembers buried at the National Memorial Cemetery of the Pacific in Hawaii, which is known as the Punchbowl, had included enough evidence to make tentative identifications when they were recovered. But the clues were never followed up and family members were never notified, he said.

Furthermore, seven had been fully identified and were mistakenly buried without names or notifications, Zimmerlee said.

The recovery and identification should be easy to correct, he said. “But here’s the obstacle — and this is a big one — the bodies are in the National Cemetery 8.6 miles from JPAC, and somebody has to go get them.”