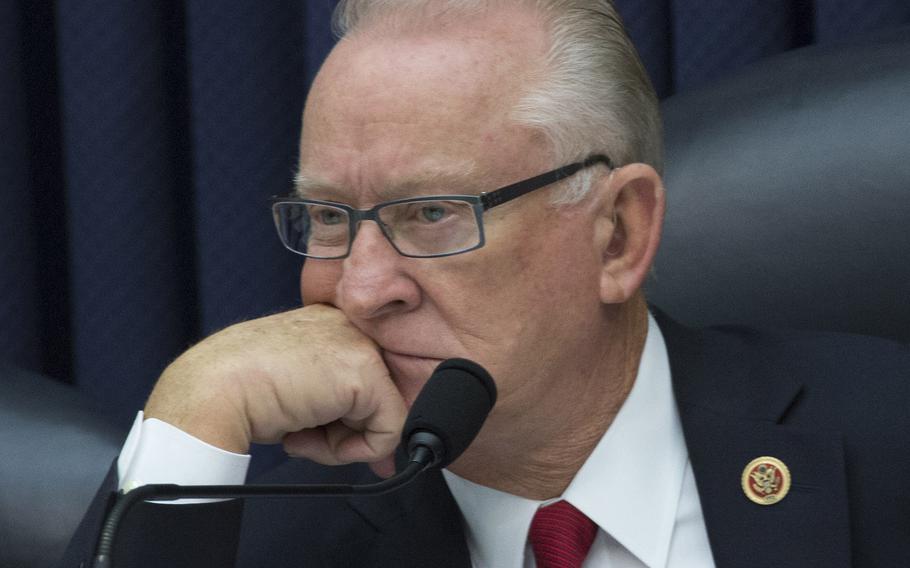 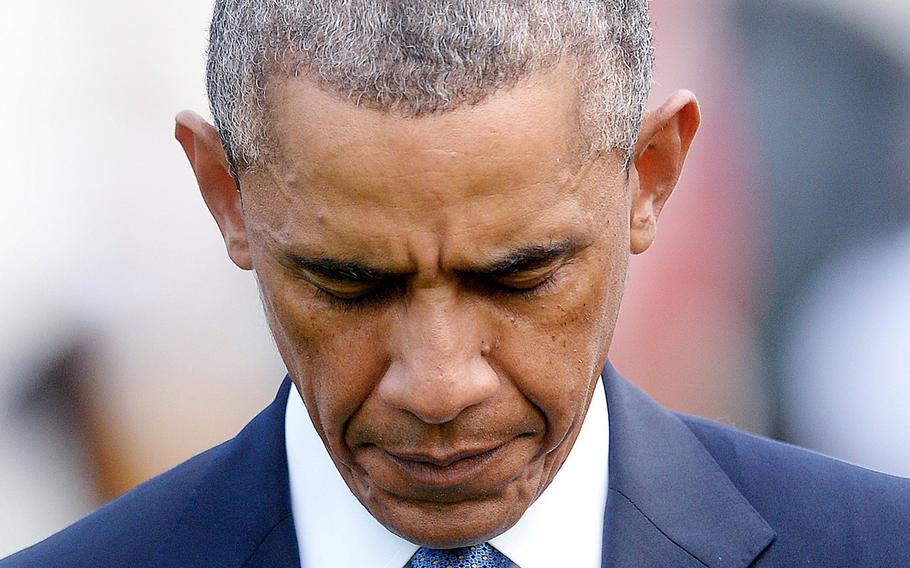 U.S. President Barack Obama observes a moment of silence to mark the 13th anniversary of the 9/11 attacks on Thursday, Sept. 11, 2014, on the South Lawn of the White House in Washington, D.C. (Olivier Douliery, Abaca Press/MCT)

WASHINGTON — Conservatives pushed back Thursday against President Barack Obama’s contention that the United States can stabilize Iraq without committing U.S. troops to a ground combat role in the country.

In a speech to the nation Wednesday night, Obama outlined a strategy that called for increased U.S. air attacks in support of Iraqi forces, coupled with increased training of the Iraqi military. The president said 475 additional troops would be sent to support the more than 1,000 others already on the ground in noncombat roles.

The chairman of the House Armed Services Committee, Rep. Buck McKeon, R-Calif., dismissed what he called Obama “minimalist” plan to the defeat Islamic State insurgents with the focus on air power. McKeon predicted that even in an advisory role, U.S. troops would likely need to do more, including fighting alongside Iraqi units, helping them with logistics and communications, and aiding in holding ground taken from the Islamic State, group also known by the acronyms ISIL and ISIS.

“American boots will be standing on sand. Americans will be shot at, and they will be shooting back,” McKeon said in prepared remarks to an audience at the American Enterprise Institute, a conservative Washington think tank. “There’s simply no other way to do this.”

He noted that U.S. reliance on airpower alone in the NATO campaign against the late Moammar Gadhafi had failed to bring stability once the Libyan leader was gone.

“We tried that in Libya, and it hasn’t worked,” he said.

“The president’s made clear that he doesn’t want U.S. boots on the ground,” Boehner said at a press conference. “Well, somebody’s boots have to be on the ground.”

The United States needs troops on the ground to defeat Islamist insurgents, he said.

“An F-16 is not a strategy,” he said. “And airstrikes alone will not accomplish what we’re trying to accomplish.”

At least one Democrat came out in favor of some U.S. ground troops taking the fight to Islamist insurgents.

“The U.S. will probably put boots on the ground, but it will be more commando raids and forward air observers with others to do the actual strikes on the ground,” said Sen. Bill Nelson, D-Fla., in a statement after Obama’s speech. “But we have no choice. This is a vicious, diabolical group that must be stopped."

The Pentagon denies that the initial waves of advisers, at least, will take part in direct combat operations.

Pentagon press secretary Rear Adm. John Kirby told reporters Thursday that the 475 advisers due to be sent to Iraq in coming days would embed with local troops at brigade level and higher headquarters, and would not engage in operations such as accompanying troops on combat operations or calling in airstrikes from the battlefield.

James Carafano, a former Army officer and security scholar at the conservative Heritage Foundation, said Obama is right to avoid sending entire divisions back into Iraq. But the plan he has laid out is too stingy with troops, Carafano said.

The president is clearly avoiding “mission creep,” Carafano said. But too few U.S. troops at the beginning of American’s war to destroy ISIS actually creates a risk of mission creep, he said.

“This is reminiscent of how we got involved in Vietnam,” he said. “[Ex-President Lyndon B.] Johnson didn’t want to be accused of being soft on communism, and he didn’t want to get in too deep. As the situation developed, he just kind of got progressively dragged in.”

But national security analyst Anthony Cordesman of the Center for Strategic and International Studies argued against more U.S. ground troops, writing in an a paper Thursday that whatever the tactical needs, the United States’ hands are tied by a number of factors.

“The United States has no domestic political support for deploying its own ground combat units,” Cordesman wrote. “It would take months to deploy and organize a major land force presence to cover the large areas involved, and U.S. ground troops would walk into Iraqi and Syrian civil wars where they would almost inevitably be seen as favoring one side and being seen as an enemy by the other.”

National security analyst Jacob Stokes, a fellow at the Center for a New American Security, a Washington think tank with close links to the Obama administration, said masses of U.S. ground troops taking on ISIS might do little good in the long run.

“Sure, we could reoccupy Iraq; we could go clear it out,” he said. “We have the power to do that.”

But there’s little appetite in the United States for a major ground campaign, or the extended occupation and counterinsurgency operation the United States would need to prevent the return of militants inflamed by the U.S. attack.

Obama is aiming for a “paired solution,” Stokes said. One part of it is of an improving political environment brought on by more inclusion of Sunnis, who might be persuaded to turn away from the Islamic State if they see their political rights being protected.

Part two of the strategy is broadened airstrikes and a number of U.S. military trainers and advisers who let locals do the fighting.

“There’s going to be a basic force of advisers,” he said. “But a larger scale force going out and riding the streets of Baghdad and beyond, that would not be a good idea.”