Opinions differ on security needs for highway in Zabul 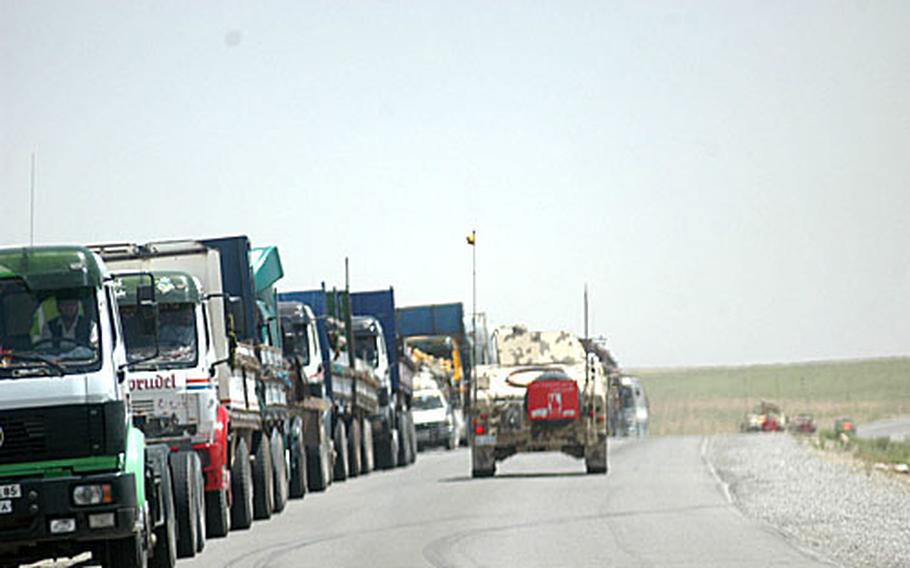 A Romanian army convoy proceeds north on Highway 1 in southeastern Afghanistan. Vehicles in the southbound lane [left] stopped for a time last Sunday in response to reports of Taliban fighters in the area. (Kevin Dougherty / S&S)

A Romanian army convoy proceeds north on Highway 1 in southeastern Afghanistan. Vehicles in the southbound lane [left] stopped for a time last Sunday in response to reports of Taliban fighters in the area. (Kevin Dougherty / S&S) QALAT, Afghanistan &#8212; The governor of Zabul province claims security along his section of Highway 1 is a major problem.

Military officials with the NATO-led International Security Assistance Force worry about the paved road, too, but say there are more pressing issues elsewhere in the province.

One place is Forward Operating Base Baylough, where U.S. and Romanian troops have been engaged 19 times in the past two weeks by small-arms fire, mortars and rockets.

Another concern is the unpaved road leading east from Qalat to Somulzay near the Pakistani border.

So far this month there have been 16 incidents, mostly roadside bombs.

By contrast, there have been seven attacks, mostly random small-arms fire, along the 100-mile stretch of Highway 1 cutting across Zabul province.

&#8220;Security is not an issue on Highway 1,&#8221; said Romanian army Capt. Mihai Anton, an intelligence officer at Camp Lagman near Qalat.

You hear it in Kabul, in Kandahar and in other places large and small.

In Zabul province, the fact is there are fewer forces than there were a year ago, and the enemy knows that, officials say.

That&#8217;s because units have been redistributed to more problematic areas, such Helmand province or along the Afghan-Pakistan border.

The people &#8220;are tired of the fighting,&#8221; said U.S. Army Capt. James Kretzschmar, also an intelligence officer at Lagman.

But he disagrees on the security issue along Highway 1, which he refers to as the Zabul Highway.

He says the enemy is trying to disrupt his government, using, for example, illegal checkpoints to extort money from motorists and terrorize his people.

Anton acknowledges that anti-coalition militants sometimes set up illegal checkpoints, but he says it&#8217;s not nearly as common as Arman believes.

The enemy is aware of ISAF&#8217;s response time, he said, so anything that does spring up doesn&#8217;t stay up for very long.

Both parties, however, agree that more Afghan National Police would enhance security, not just on the newly improved highway but everywhere in this poor, poppy-deficient province.

According to Arman, his region is supposed to get another 500 police officers in the coming months to augment the 800 the province currently has.

As in other areas of Afghanistan, there&#8217;s a growing consensus that a sidearm alone isn&#8217;t enough firepower for an Afghan police officer.

The trouble, said many ISAF officials, is the ANP is riddled with corruption.

Until that issue is properly addressed, particularly by the Afghan government, the road to security will be nowhere near as smooth as Highway 1.