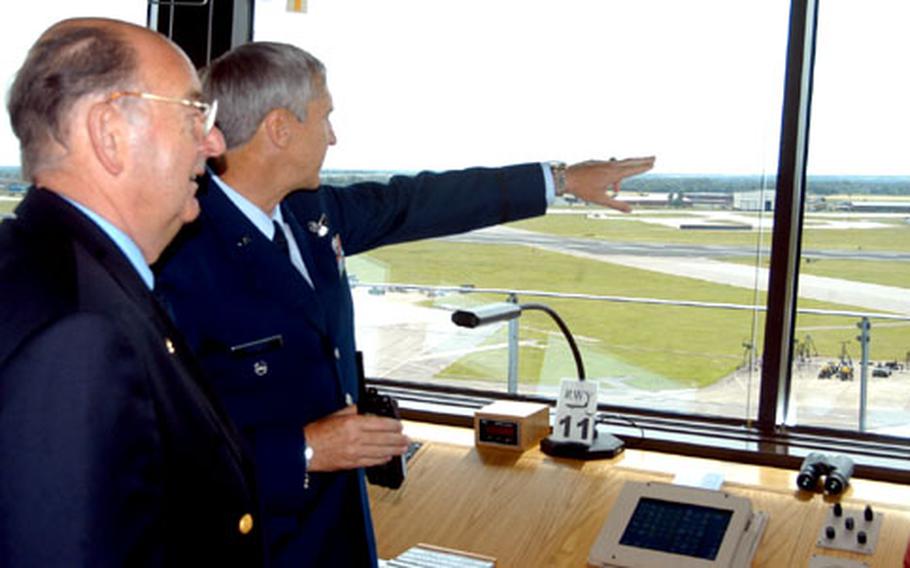 RAF MILDENHALL, England &#8212; As this base in eastern England marks 70 years of service this year, Wednesday will be one of its more memorable days.

For the first time in nearly five months, a fixed-wing aircraft touched down on the runway, which has been undergoing renovation since March.

And watching as the KC-135 Stratotanker landed were more than 200 people who gathered to dedicate a $15 million operations facility that includes a nine-story control tower and a modern, spacious firehouse.

&#8220;It&#8217;s an exciting day for our base,&#8221; Col. Richard Devereaux, commander of the 100th Air Refueling Wing, said in remarks to the audience that included military members and local officials from neighboring towns.

The base was opened on Oct. 16, 1934, as the winds of war were blowing on the continent. It was home to a bomber unit that launched sorties just six hours after war was declared on Sept. 3, 1939.

The U.S. Air Force arrived at the base in 1951. The wing is celebrating the base&#8217;s heritage throughout the year, which was an undercurrent of the ceremony on Wednesday.

The smoke that curled from the tires of the KC-135 as they touched the new concrete was a sign that business is returning to normal at RAF Mildenhall after a $15 million makeover to the runway. Since March, the airplanes have been flying from RAF Fairford, about 200 miles away.

&#8220;Five months later, it was so sweet to touch down on that runway,&#8221; said Col. Bryan Benson, who flew the aircraft that landed Wednesday. Benson, commander of the 100th Operations Group, commanded the 500 people deployed to RAF Fairford.

Over the next few weeks, more aircraft will return until operations are back to normal in late July or early August, about one month earlier than originally planned.

Despite that triumph, the star of the day was the new facility, called an operations and crash fire rescue complex. Besides the tower and firefighting area, it includes an area for mission planning and airfield management.

Chief among the upgrades is a weather observation system that allows forecasters to gather a wide range of data with a single machine.

The tower is the most obvious addition to the base, standing 123 feet high and sticking out like a sore thumb on the flat English landscape. It replaces a tower that was only two stories high and built more than 50 years ago.

The old tower was constantly upgraded with new technology, but the new one has even more modern air traffic control equipment. MacArthur pointed out a system that measures wind speed and direction at both ends of the runway.

Currently, MacArthur said, the new tower has only one problem. The elevator isn&#8217;t working.

The old fire station had been enlarged time and again over decades, making it an inefficient building, he said. That has been corrected in the new building, designed from the beginning as a fire station.

It provides better facilities for cleaning and maintaining equipment and &#8220;vastly improved living conditions,&#8221; he said.