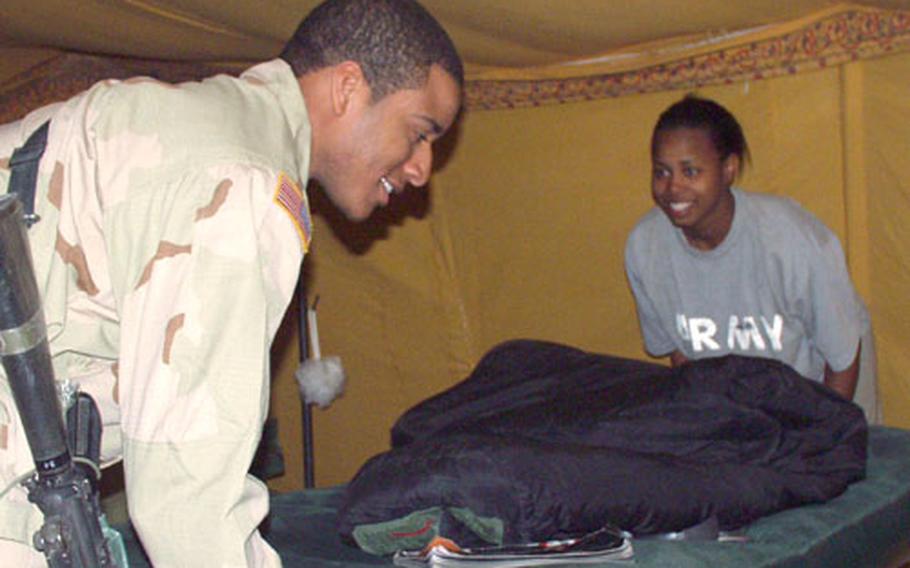 Spc. Douglas Jeter (left) and Spc. Toshiba Williams, both of the 6th Squadron, 6th Cavalry Regiment from Illesheim, Germany, move a cot and gear from one tent to another. (Steve Liewer / S&S)

Spc. Douglas Jeter (left) and Spc. Toshiba Williams, both of the 6th Squadron, 6th Cavalry Regiment from Illesheim, Germany, move a cot and gear from one tent to another. (Steve Liewer / S&S) CAMP UDAIRI, Kuwait &#8212; U.S. troops in Kuwait spent last week getting light. This week, they are getting tight.

In a move jokingly being called &#8220;Operation Sardine,&#8221; soldiers in the forward base camps started squeezing together Thursday and Friday to make room for the arrival of the 101st Airborne Division from Fort Campbell, Ky.

Military officials have declined to give specific numbers on how many troops are in Kuwait, but tens of thousands of servicemembers have arrived in the region and thousands more are streaming into Kuwait&#8217;s northern desert every day.

That means more soldiers in every tent, and much less space. Bemis said the small tents, which had held 14 soldiers, must now sleep 18. The large tents, which formerly held 40 to 45 soldiers, are now crammed with as many as 65. That translates to 2 or 3 feet between cots, and very little personal space.

The V Corps units at Camp Udairi are handling the change in their own way.

Two units from Illesheim, Germany &#8212; the 2nd Squadron, 6th Cavalry Regiment and the 7th Battalion, 159th Aviation Regiment &#8212; each are consolidating, reducing personal and office space in tents to make room for bunks. The 2nd Squadron has moved cots into what formerly was its MWR tent.

The 6th Squadron, 6th Cavalry Regiment, also from Illesheim, has broken out some smaller tents that had been in storage since the unit arrived in Kuwait three weeks ago in addition to moving soldiers closer together. Forklifts moved back the heavy portable concrete barricades that surround the 6th Squadron&#8217;s tent city to add more space for them.

Even pilots pitched in to help. They will be moving into the smaller tents because unit commanders find it easier to keep those tents quiet so the pilots can get the proper rest they need to fly their nighttime missions.

The 5th Battalion, 158th Aviation Regiment from Giebelstadt, Germany, will actually be sharing its tents with some of the 101st Airborne troops, said Lt. Col. Pete Franks, the unit&#8217;s commanding officer. He said he is still determining how his troops will consolidate.

At the 11th Aviation Regiment&#8217;s headquarters company, two tents from the Tactical Operations Center were removed and placed outside the ring of concertina wire that surrounds the TOC. Some of the regiment&#8217;s senior leadership now will live in them.

Soldiers spent much of Thursday moving gear from tent to tent and shoving cots closer together. The grumbling was muted. They know this is a part of Army life.

For the previous week, all the units had been under orders to shed extra gear, anticipating that most Task Force 11th Aviation troops would pack up and move forward if war starts. Some of it has been mailed home, and more has been stowed in containers that will be reopened when the unit reaches its still undetermined new home.

They realize they could have it a lot worse. Two local commanders said some 3rd Infantry Division units will have to vacate their camps entirely and pitch tents in the desert.

11th Aviation soldiers understand their living arrangements are temporary, and will almost certainly become more Spartan if there is a war.