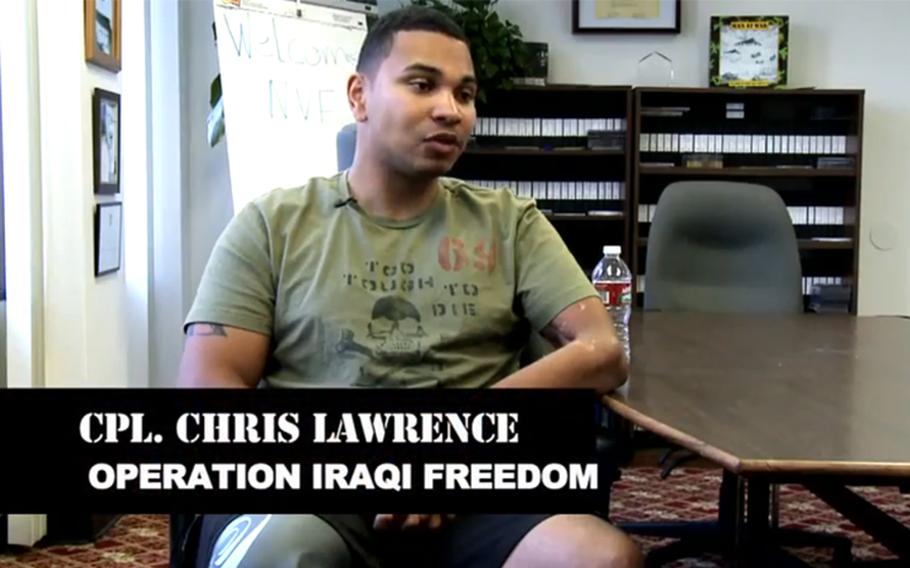 Cpl. Chris Lawrence is seen in an image from the trailer for the documentary 'Operation Resurrection.' (http://www.youtube.com/user/OpResurrection)

WASHINGTON — The bottom line of “Operation Resurrection,” a new film about the plight of returning veterans, appears as an on-screen quote about 20 minutes into the documentary.

“The former are far better prepared,” the quote ends.

But the hour-long film, screened Tuesday at the Capitol for an audience of about 70 advocates, aides, veterans and congressmen, goes far beyond a medical perspective, showing how American society is poorly prepared for the 2.2 million veterans returning from Iraq and Afghanistan.

As many as 400,000 — almost 20 percent — are returning with traumatic brain injury conditions, the diagnosis and treatment of which physicians are still beginning to understand. Many more will suffer from post traumatic stress. Others will fall into spirals of unemployment, substance abuse, crime or suicide.

Congress has been somewhat helpful, passing a G.I. Bill a few years ago and tax credits this year to encourage businesses to hire veterans. But the problem is larger, and not even the Veterans Administration has been able to cope, the film emphasizes.

It was too much for Chrisanne Gordon, a physical therapy doctor in Ohio. Five years ago, using as much as $300,000 out of her own pocket, Gordon bought a camera, hired a crew and went to work. Drawing from her own experiences with a brain injury in a home accident that left her unable to make a left turn while driving or read a full sentence for six months, Gordon went to the Oregon grave of a 20-year-old U.S. soldier killed in the Mideast. His mother was a close friend.

“All of these graves said ‘Alive in Christ.’ ‘Alive in Christ.’ And after 20 minutes of seeing this, I realized they are more alive to their families now than (living veterans) are to us, sometimes,” Gordon said. “That also gave me the title… So we’re going to wake people up with this.”

Gordon and others are trying to get the History Channel or Military Channel to air the film for more mainstream viewing. A trailer is available on YouTube, and there’s a Web site (www.resurrectinglives.org). Ben Patton, grandson of Gen. George Patton, provided narration.

Congressman Steve Stivers, an Ohio Republican, pledged support for Gordon’s project. A former colonel in the Ohio National Guard and an Iraq War veteran, Stivers met her years ago while a state senator.

“We’re rolling up our sleeves — we’ve got a lot of work to do,” he said. “There is 13 percent unemployment among veterans — that’s shamefully high and twice the average.”

Stivers said Ohio has a stake in the issue with the sixth-largest veterans population in the U.S.

It is home to some of the more creative solutions being considered, as the film reveals. With an abnormally high crime rate among returning veterans — many suffering from undiagnosed or under-diagnosed medical issues — the state is using “veteran’s courts” that Stivers estimates are active in 20-30 of Ohio’s 88 counties. They were created by judges who realized the inherent special circumstances.

To Gordon, such creative thinking is critical to solving a desperate need which is only expected to grow. She recalls a veteran advising her to read “The Art of War,” specifically the passage “with chaos comes opportunity.”

“We’ve got a lot of opportunity in Washington right now,” she said.