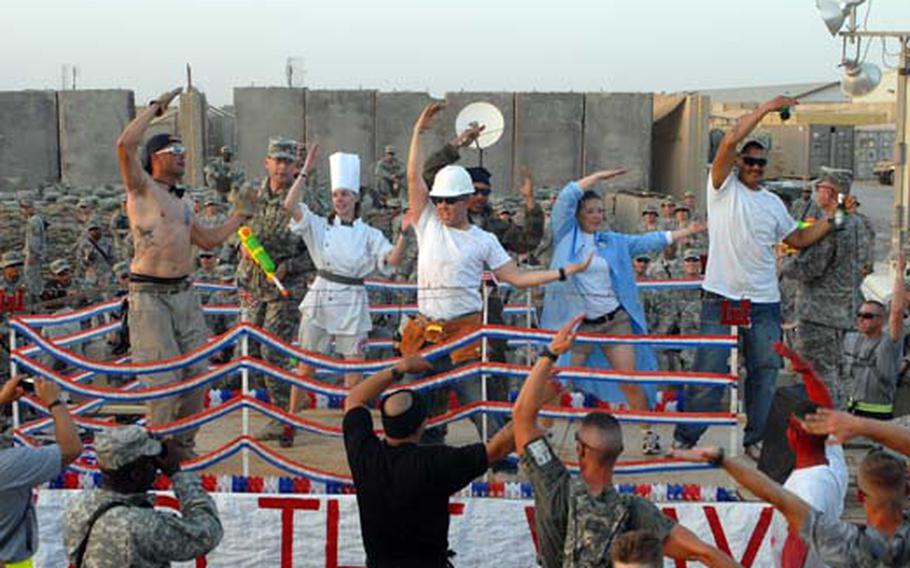 Performers, including 172nd Infantry Brigade commander Col. Jeff Sinclair (second from left) dance on a float during a parade at Forward Operating Base Kalsu on Sunday to mark the Army&#39;s 234th Birthday. (Seth Robson / S&S)

Performers, including 172nd Infantry Brigade commander Col. Jeff Sinclair (second from left) dance on a float during a parade at Forward Operating Base Kalsu on Sunday to mark the Army&#39;s 234th Birthday. (Seth Robson / S&S) But on Sunday nearly every soldier at Forward Operating Base Kalsu was lined up along a parade route to watch and cheer as costumed comrades threw lollypops and gyrated like a new generation of Village People. There were floats decorated by each battalion, water-pistol fights, a bonfire, cake cutting and pyrotechnics.

The 172nd Infantry Brigade used the Army&#8217;s 234th birthday for what it calls an &#8220;anchor point&#8221; &#8212; a communal tool to reduce stress among troops serving downrange. Col. Jeff Sinclair, the brigade commander, outlined a plan for such events during meetings at the brigade&#8217;s home base in Grafenw&#246;hr, Germany, before the unit&#8217;s nearly 4,000 soldiers deployed on a yearlong mission in November.

To keep soldiers focused on the fight, he told brigade leaders, they should provide anchor points &#8212; familiar, pleasant experiences that reduce stress and give a person a chance to rejuvenate.

Sinayoko, a father of five, said the worst part of the deployment is being separated from his family. But 14- to 16-hour shifts also take their toll.

The anchor point events are a good way for members of the unit to work off stress, Sinayoko said.

Since the 172nd arrived in Iraq, there have been soccer and basketball games, a tug-of-war and numerous ceremonies such as an event in April to honor soldiers who have made exemplary contributions to the unit, he said.

Though the measures may sound strange, some experts say they can serve a vital purpose.

&#8220;While I do not personally engage in water pistol fights or hold parades to reduce stress, I do use humor and behavioral distraction to break unhealthy, maladaptive reactions,&#8221; Mark D. Lerner, a clinical psychologist and president of the Institute for Traumatic Stress Inc., said. &#8220;This is particularly common among emergency responders who face traumatic events on a daily basis. Humor and distraction help to anchor individuals and provide brief separation or a cognitive break from the stressor.&#8221;

The importance of keeping a lid on combat stress was laid bare by last month&#8217;s killings of two members of the brigade, along with three other servicemembers, allegedly by another soldier who was a patient at a combat stress clinic in Baghdad.

Cpl. Josh Perry, 24, of Athens, Pa., a military policeman at FOB Kalsu, just south of Baghdad, said troops there don&#8217;t accept combat stress as an excuse for the killings.

Perry and the other MPs in his company are still recovering from the stress of losing one of their own, Sgt. Raul Moncada, killed April 13 in an explosively formed penetrator attack in Karbala, he said.

&#8220;We could tell within the company how it impacted us, but we know what we signed up to do,&#8221; he said, adding that Sunday&#8217;s parade was a great way to bring soldiers together.

Another member of Moncada&#8217;s unit, Pfc. Zachary Jarrell, 20, of Mobile, Ala. said losing a battle buddy is always on his mind.

&#8220;Your life is on the line every day, but you put your gear on and go out,&#8221; he said, adding that talking to Perry about the loss of their friend helped them deal with the tragedy.