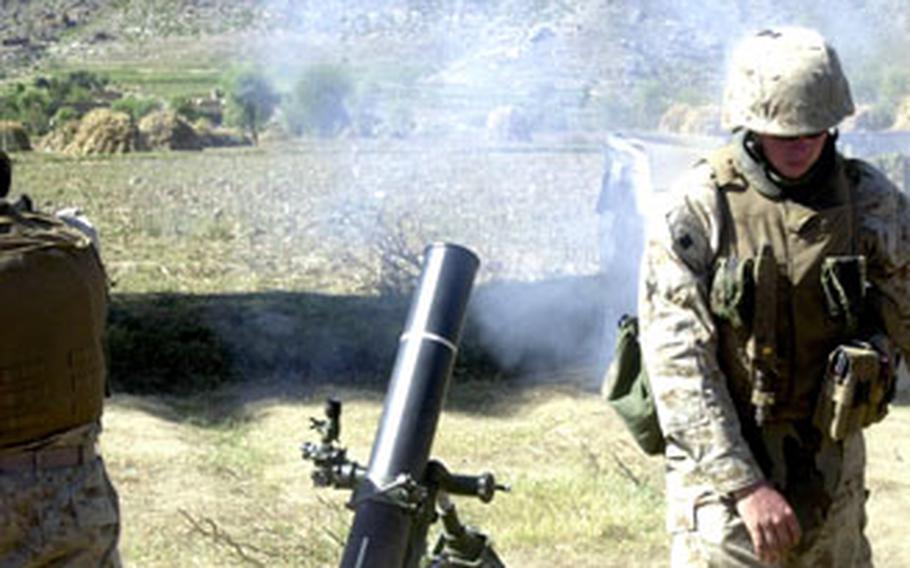 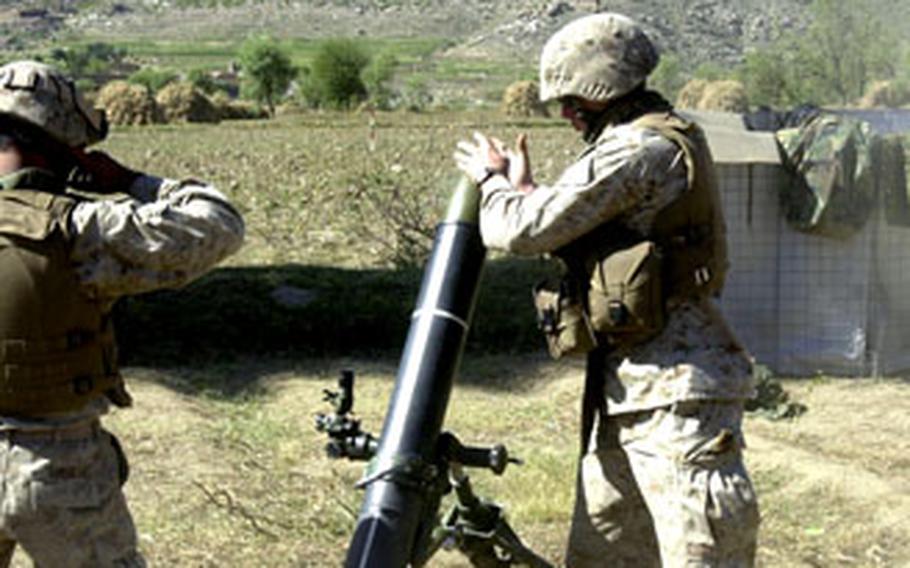 WATAPOOR, Afghanistan &#8212; Bullets were tinging off the Humvees and rocket-propelled grenades were hitting so close to the Marines that they could see orange flecks as the grenades exploded.

Marines in an eight-Humvee convoy with the Company E, 2nd Battalion, 3rd Marine Regiment, 3rd Marine Division&#8217;s combined anti-armor team &#8212; on their way to Camp Blessing, a forward operating base in eastern Afghanistan&#8217;s Kunar province &#8212; were under ambush near Kandagl, Afghanistan, the night of Oct. 17 during Operation Pil.

Lance Cpl. Nathan Davenport, 20, of Phoenix, Ariz., was manning a MK-19 grenade launcher in a Humvee turret when the convoy came under attack.

Despite the punishing firepower the Marines slung, the enemy was still shooting at them as the Marines drove away.

Davenport made it through the engagement unscathed, but three Marines were wounded in the incident. Two Marines were hit with shrapnel and a third suffered a gunshot wound to the arm.

The incident was one of roughly 12 engagements during Operation Pil, a seven day, battalion-reinforced operation aimed at disrupting enemy activities and sanctuaries in Afghanistan&#8217;s volatile Kunar province. In recent weeks, U.S. troops have come under fire and been subject to roadside bombs in Kunar province.

Pil is the Dari word for &#8220;elephant,&#8221; and giving the operation a local name shows the ongoing push by U.S. forces to move Afghan forces to the forefront. Previous battalion-size operations waged by Marines this year have used names such as &#8220;Red Wings&#8221; and &#8220;Whalers.&#8221; Afghan National Police and about 300 Afghan soldiers from the Commando, 31st and 32nd Afghan National Army Kandak battalions participated in the operation, which began Oct. 16 and ended Sunday.

Navy corpsmen provided medical expertise while hiking up the area&#8217;s brutal mountains with Marines. And Air Force tactical air controllers called in air support during the operation. Army Apache helicopters and Air Force A-10 Warthogs were among the aircraft providing support.

No U.S. troops were killed during the operation and only four were wounded.

No official number of enemy troops killed during Operation Pil was available.

The biggest hurdle in launching a battalion-sized operation during the Muslim holy month of Ramadan was dealing with religious issues, Scott said.

During Ramadan, Muslims refrain from eating or drinking during daylight hours. Troops were reminded not to eat or drink in front of locals during the operation&#8217;s missions.

&#8220;We were able to work hand-in-hand with Afghan National Security Forces and the Government of Afghanistan through religious and cultural sensitivities to have a successful operation,&#8221; said Scott, 37, of Harlingen, Texas.

WATAPOOR, Afghanistan &#8212; Mountain-worn Marines with 1st Platoon, Company F, 2nd Battalion, 3rd Marine Regiment, 3rd Marine Division were ready for the &#8220;cordon and soft knock&#8221; mission &#8212; even though their feet told them something else.

By 2 p.m. Friday, the 1st Platoon Marines were back on the road with Afghan National Army soldiers, heading to a village near Watapoor to search houses.

Platoon commander 1st Lt. Stewart Geise reminded Marines and Afghan troops that in their tired state they still had to remain alert as anything could happen at anytime.

When the platoon entered the village, one group of Marines took to the high ground to provide security for fellow Marines and Afghan National Army troops.

Being a &#8220;soft knock&#8221; mission, Geise approached Afghan homeowners &#8212; through an interpreter &#8212; and asked if Afghan troops could search their homes. All the homeowners obliged and no enemy weapons were uncovered during the searching that lasted about three hours Friday afternoon.

Using the Afghan troops to perform the searches bolsters the credibility of the Afghan soldiers, fosters relations in the village and gets them used to conducting such mission, Geise said.