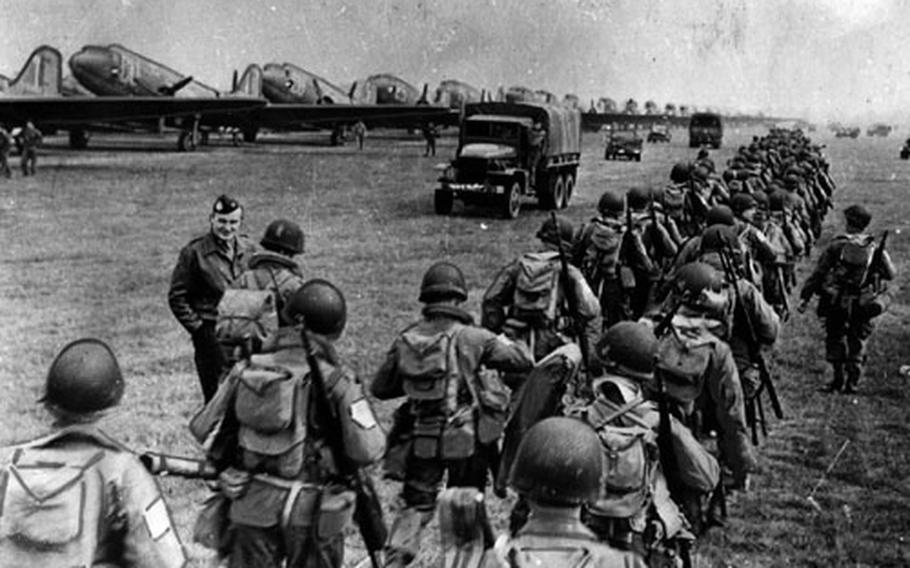 Lines of Allied troops make their way to the loading area of an airfield in England for Operation Market Garden in 1944. It was a major defeat for the Allies, who were still celebrating the successful landings and breakout at Normandy, France. (File photo)

Lines of Allied troops make their way to the loading area of an airfield in England for Operation Market Garden in 1944. It was a major defeat for the Allies, who were still celebrating the successful landings and breakout at Normandy, France. (File photo) 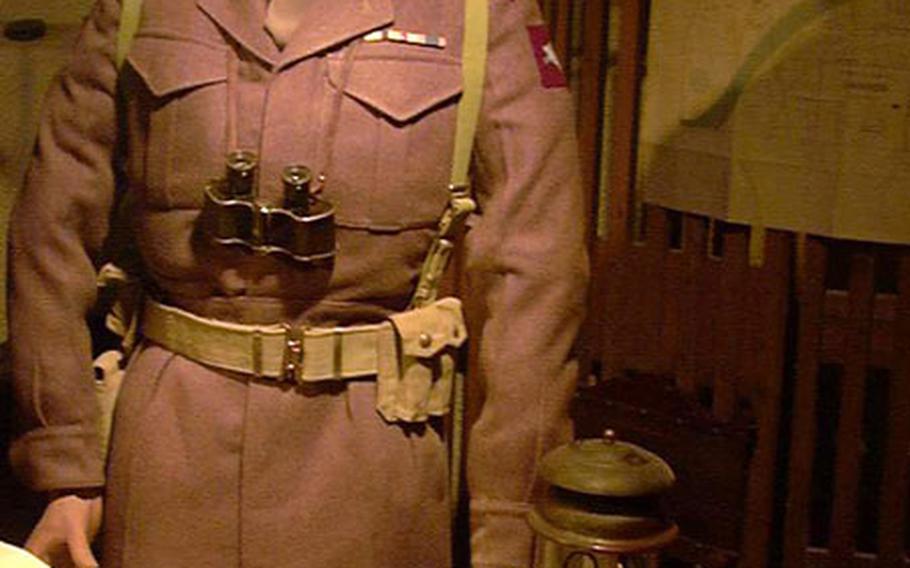 Buy Photo
A figure representing British Maj. Gen. R.E. Urguhart wears the binoculars and beret the general wore in 1944 when he commanded troops from the hotel where the Airborne Museum is now housed in Osterbeek, Netherlands. Sean Connery portrayed the general in the movie "A Bridge Too Far." (Ron Jensen / Stars and Stripes file photo) 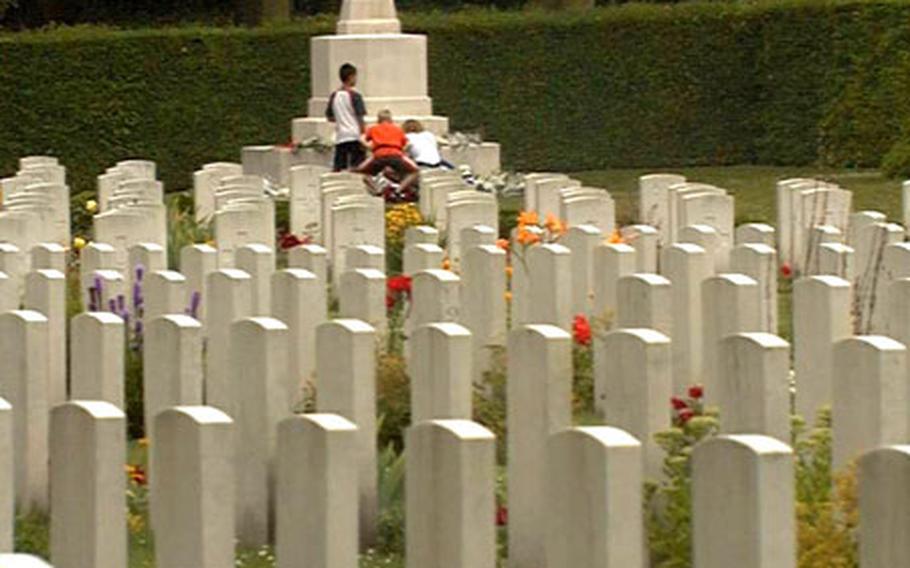 Buy Photo
Visitors to the Osterbeek War Cemetery in the Netherlands examine the monument surrounded by the 1,754 graves of Allied servicemembers. Most were killed trying to capture the nearby bridges in Arnhem during World War II&#39;s Operation Market Garden in 1944. (Ron Jensen / Stars and Stripes file photo)

Sixty years ago, Donald Burgett was hanging beneath a parachute, drifting toward the Dutch plain north of Eindhoven.

He was 19 and a member of Company A, 506th Parachute Infantry Regiment, part of the 101st Airborne Division, and had recovered from wounds suffered on the D-Day invasion of Normandy, France.

His descent on Sept. 17, 1944, was taking him into one of the major battles of World War II in which more than half his company would be killed or wounded. In all, the Allied losses would be measured in thousands.

And although ceremonies are planned in Holland this week to mark the 60th anniversary of Operation Market Garden, the date is receiving a fraction of the attention that preceded the D-Day anniversary celebration three months ago.

Burgett, 79, of Howell, Mich., said there is a good reason for that. &ldquo;When you lose a battle,&rdquo; he said in a telephone interview, &ldquo;people don&rsquo;t want to remember it.&rdquo;

Operation Market Garden was a major defeat for the Allies, who were still celebrating the successful landings and breakout at Normandy. This operation combined airborne troops (Market) and infantry (Garden) in a bold attempt to capture bridges over Dutch waterways.

If successful, it would have provided the Allies a northern route into Germany &mdash; perhaps, top commanders thought, even ending the war before winter. Field Marshal Bernard Montgomery, the plan&rsquo;s main architect, had great hopes.

Instead, the operation, portrayed in the book and movie &ldquo;A Bridge Too Far,&rdquo; failed and the war dragged on until late spring.

&ldquo;The plan was incredibly audacious,&rdquo; said Andy Robertshaw, director of education at the National Army Museum in London. &ldquo;[But] if you take a big risk, it might go wrong.&rdquo;

Thousands of paratroops and hundreds of gliders landed on Dutch soil to begin the operation.

The Americans were mostly successful in capturing their objectives, but the British troops were dropped six miles from the bridge at Arnhem. The Germans were able to quickly put up a stout defense.

Burgett said he and his comrades in arms knew the outcome of the entire effort as soon as the British failed to reach Arnhem.

&ldquo;We knew the battle was lost,&rdquo; he said.

But the battle raged for 10 weeks, with both the British and Americans suffering great casualties. Finally, in November, the withdrawal came.

&ldquo;In A Company, we only had 38 men left of about 160,&rdquo; said Burgett, who wrote about his experiences in the book &ldquo;Road to Arnhem,&rdquo; one of four books he&rsquo;s written about his wartime experiences. &ldquo;We only had three lieutenants left in the whole company.&rdquo;

In all, about 1,800 American paratroops died in Holland.

Burgett, a private at the time, said the loss of life was especially hard to take since the outcome was decided so early.

&ldquo;Back in the first eight days, we knew it was lost,&rdquo; he said. &ldquo;That was the hardest part. We knew we were there for no reason. We weren&rsquo;t just disgusted, we were pissed off.&rdquo;

He recalled seeing a dead GI with half his head blown away. He looked at the dog tags and learned it was George Newport.

&ldquo;He was a friend of mine. We used to drink beer together,&rdquo; he said.

&ldquo;It breaks my heart to this day, what happened to the British &lsquo;Red Devils,&rsquo;&rdquo; said Burgett.

Robertshaw said Allied commanders were surprised by the stiff German resistance, but they shouldn&rsquo;t have been.

&ldquo;The Germans are fighting for their homeland. There was no way they were going to let that go easily,&rdquo; he said.

The ultimate problem with Operation Market Garden was in the planning, he said. It was too audacious and too complicated. The infantry had to cover too much ground to get to their airborne colleagues, who had to hold out for too long without support.

The Allies rushed into Operation Market Garden. The Germans had been giving ground since the breakout from Normandy in July. Cheers of liberated Parisians still rang in the Allies&rsquo; ears. There was too much optimism for a quick end to the war.