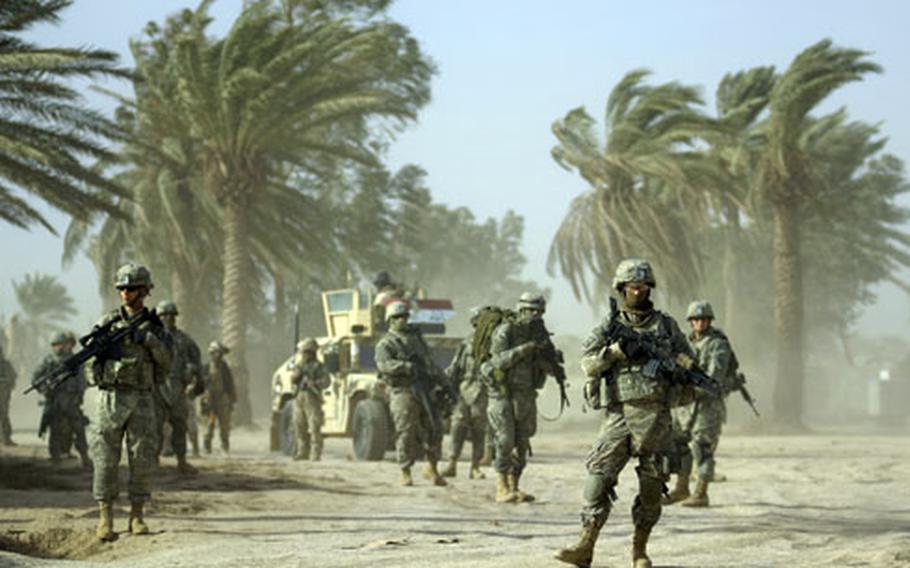 Soldiers from 1st Platoon, Company A, Task Force 3-66 Armor and Iraqi troops wait in gusting winds before heading out on patrol Friday in Tahweela, Iraq. ()

Soldiers from 1st Platoon, Company A, Task Force 3-66 Armor and Iraqi troops wait in gusting winds before heading out on patrol Friday in Tahweela, Iraq. () 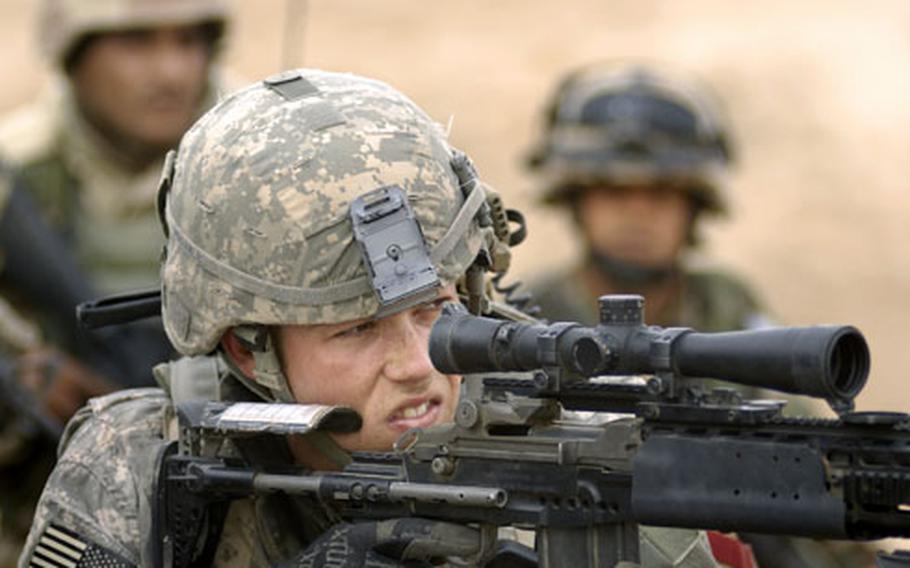 Sgt. Joseph Prince, a soldier from 3rd Platoon, Company A, Task Force 3-66 Armor, uses his scope to identify a potential target spotted by the Iraqi army while on patrol Thursday in Tahweela, Iraq. () 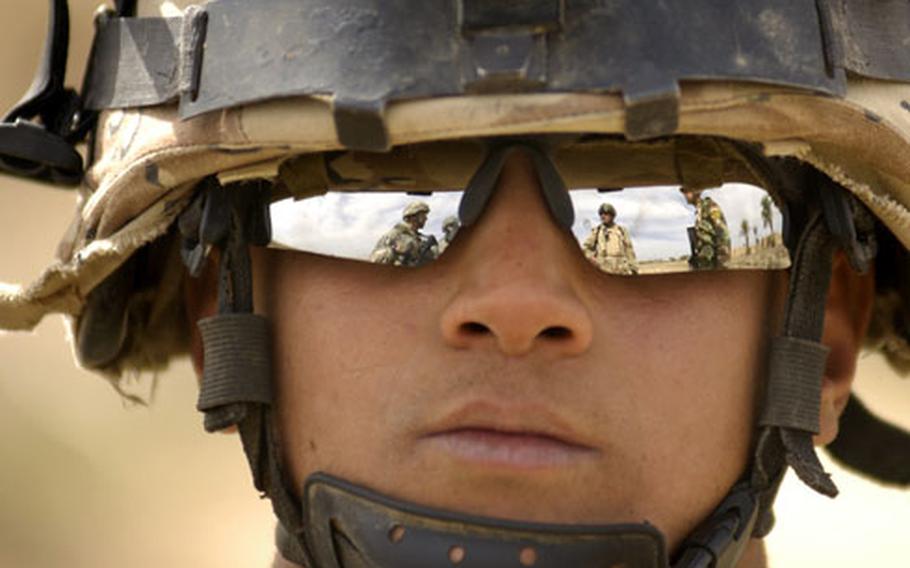 Reflected in the glasses of an Iraqi soldier, 1st Lt. Javier Avila, 3rd Platoon leader for Company A, Task Force 3-66 Armor, and Lt. Zafer from the Iraqi army, coordinate a patrol Thursday in Tahweela. ()

TAHWEELA, Iraq &#8212; American and Iraqi troops have kicked off operations in southern Diyala province aimed at bringing a "clear, hold and build" strategy to rural areas that have long been safe havens for Sunni insurgent groups.

Operation Dark Wolf Pursuit One was launched last week as U.S. soldiers partnered with Iraqi army units to clear this desolate yet heavily mined area in the southern Balad-Ruz district of Diyala province.

Security conditions have improved &#8212; to a degree &#8212; in the more densely populated areas of the province. That, plus the addition of a fourth brigade for the area&#8217;s Iraqi army division, mean efforts can be shifted to the less-populated southern Balad-Ruz district, according to Lt. Col. Lou Rago, commander of Task Force 3-66 Armor.

Soldiers with Company A, 1st Battalion, 2nd Infantry Regiment out of Grafenw&#246;hr, Germany, set out on foot patrols in Tahweela village as U.S. engineer units swept the dusty roads for mines that have struck several Mine Resistant Ambush Protected (MRAP) vehicles in recent weeks. For their current deployment, the Company A soldiers have been attached to the 3rd Battalion, 66th Armor out of nearby Forward Operating Base Hammer.

The operation is part of larger efforts to enact the "clear, hold and build" strategy in the area. That strategy has been credited with bringing security to many parts of Iraq, but it requires troop levels that were not available in many areas.

After villages are cleared, the intent is for Iraqi units to establish combat outposts and observation posts in the villages to hold the territory, allowing for the building process.

"The Iraqi army is able to emplace a brigade in this area to try and establish security conditions really so they can reintroduce internally displaced persons back to the villages that they had left two, three years ago during the sectarian violence," Rago said.

During the clearing portion of the operation, U.S. and Iraqi forces discovered at one home in Tahweela about 140 bags of fertilizer that could be used to make homemade explosives.

Iraqi explosive ordnance disposal units detonated at least one mine on Friday. Iraqi soldiers also found two empty 105 mm shells that could be packed with homemade explosives to make a roadside bomb.

On the other side of the village Friday, soldiers with Company A&#8217;s 1st platoon withstood heavy winds as they patrolled past village homes and abandoned farmland behind about 50 Iraqi army soldiers. With the Iraqis taking the lead on the foot patrol, the progress was excruciatingly slow. Just the day before, U.S. soldiers working with Iraqis cleared the same ground in a fraction of the time without incident.

Saturday morning, soldiers patrolled a different area of Tahweela and talked to the locals.

"The purpose was to verify the routes, talk to the local nationals, get their opinion of the area, see if anybody&#8217;s hiding here or if there are any weapons caches," said 1st Lt. Dritan Xhakolli, leader of Company A&#8217;s 1st Platoon. "We&#8217;re trying to get their understanding, get them believing in us that we&#8217;re not here as the bad guy, but we&#8217;re here to try to help them."

Working with the Iraqi army here sometimes proved frustrating for U.S. soldiers, a common theme across the country. Under the new security agreement, Iraqis must take a leading role in all operations.

When U.S. forces got word Saturday afternoon that a high-value target was in the area, they had to round up Iraqi soldiers to raid the house where the suspect was believed to be.

It took hours for U.S. soldiers to gather Iraqis for the task. First, the Iraqis asked if their soldiers could eat lunch before proceeding. Then Iraqi soldiers set off on a mission and said they couldn&#8217;t go on the raid because they were operating in another area. Not until Xhakolli physically went to the Iraqi unit in the other area was he able to get five Iraqi soldiers to conduct the raid.

U.S. soldiers established themselves in an overwatch position outside as the Iraqis entered the house. The high-value target was not there &#8212; just a few women and two teenage males. After about 40 minutes, the man of the house came home after bringing in his herd of sheep from nearby fields. Even though the suspect wasn&#8217;t around, Xhakolli expressed his gratitude to the Iraqi soldiers for coming along so the mission could proceed.

The intent is for this to be the Iraqi army&#8217;s operation, said Capt. Dan Godbey, Company A commander.