Operation Help Out to send clothes, candy to Afghan children 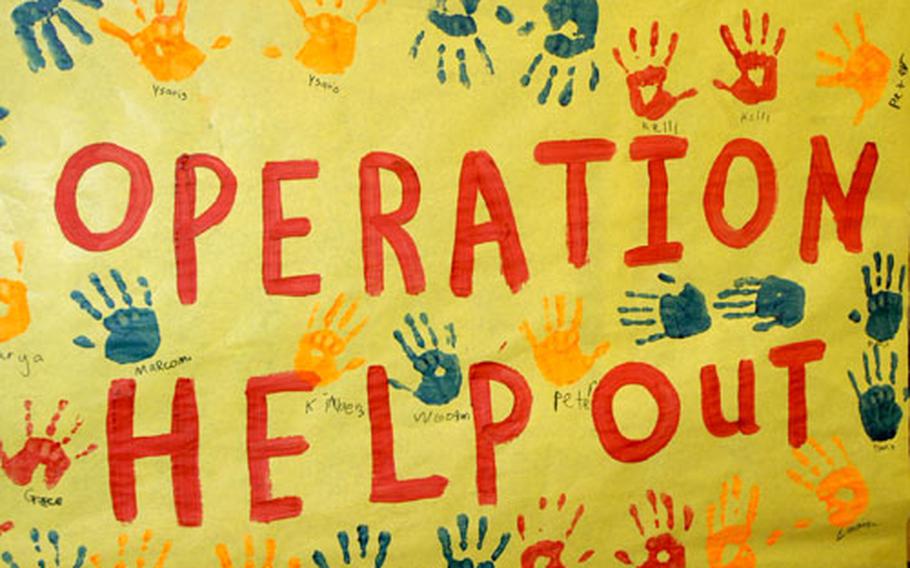 Members of the Promise Passport Club dipped their hands in paint to help decorate this sign publicizing Operation Help Out, an effort to gather lollipops, shoes and warm clothes for children in Afghanistan. (Kent Harris / S&S)

Members of the Promise Passport Club dipped their hands in paint to help decorate this sign publicizing Operation Help Out, an effort to gather lollipops, shoes and warm clothes for children in Afghanistan. (Kent Harris / S&S) Jona Aldan puts a pair of shoes into a box while Kristee Emmons waits her turn as other members of the Promise Passport Club at Vicenza, Italy, gather around. (Kent Harris / S&S)

VICENZA, Italy &#8212; Hundreds of American children at Caserma Ederle have a parent deployed on a mission to improve the lives of people in Afghanistan. Many of those kids will be participating in a project over the next several months to do the same thing.

&#8220;They are contributing to something that their deployed parent is contributing to,&#8221; said Tamara Browning, a program operations specialist with Child and Youth Services.

The idea behind Operation Help Out came from a soldier deployed to Afghanistan. He told his wife he had noticed large numbers of kids showing up in communities during medical visits. Soldiers treating the kids soon discovered most of them weren&#8217;t in need of medical attention. They just wanted the lollipops that were passed out after the treatment was provided.

Many of those standing in line weren&#8217;t wearing shoes.

Afghanistan is one of the poorest countries on earth, so there&#8217;s also concern that kids won&#8217;t have enough warm clothes this winter.

There appears to be plenty of kids ready to help out in Vicenza.

So fifth-graders in the Promise Passport club decorated boxes that will soon be located around the base. Community members will be encouraged to buy one of the specified items at the post exchange or commissary and drop it in. Or to donate warm clothes that their own children have outgrown.

In October, junior high students will take over the operation as their project. Browning said there&#8217;s been a lot of interest expressed, even though organizers haven&#8217;t really gotten the word out yet. Packages will be sent downrange as they&#8217;re filled.