Opera springs to life for students, visitors at Baumholder show 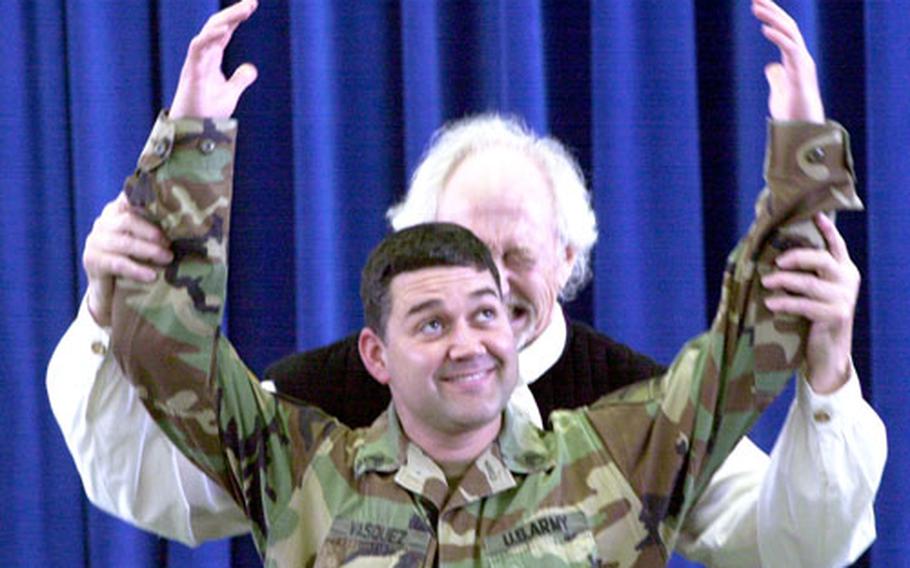 No great art was ever created without a little pain. In this case, it was Staff Sgt. Humberto Vasquez, foreground, who did the suffering. Playing a tree, Vasquez had to hold his arms in place for almost 10 minutes after baritone John Reinhardt posed the soldier during a performance of selections from Mozart’s “The Marriage of Figaro.” (Terry Boyd / S&S)

BAUMHOLDER, Germany &#8212; Like something out of a convoluted opera plot, Staff Sgt. Humberto Vasquez went from knowing nothing about opera to a starring role in one.

Vasquez, assigned to the 1st Armored Division&#8217;s 47th Forward Support Battalion, was plucked from the audience at Smith Elementary School on Wednesday afternoon to play a tree during a selection of Mozart&#8217;s &#8220;La nozze di Figaro,&#8221; (The Marriage of Figaro.)

It was something of a family production, with his daughter Natasha, 8, &#8220;baahing&#8221; away happily a few inches away, playing a sheep. And because there is never great art without pain, Vasquez had to hold his arms in place for almost 10 minutes while he played a tree.

The Vasquez&#8217;s were but two of a gymnasium full of neophyte opera fans Wednesday as baritone John Reinhardt and his Pocket Opera Players visited the school. Reinhardt came from his base in Wiscasset, Maine, with the Maine Arts Commission Touring Artists.

The Pocket Opera Players consist of Reinhardt, a 26-year Navy veteran who retired as a senior chief petty officer, and his pianist, Kathleen Dodge-DeHaven, a military spouse who lives at Kapaun Air Station in Kaiserslautern, Germany.

Reinhardt and Dodge-DeHaven came to Smith as part of &#8220;Amadeus Revisited,&#8221; a series of two- and six-day programs at Department of Defense Dependents Schools.

But it is the students, teachers and even an occasional audience member who are the stars as Reinhardt introduces schools to the drama, the costumes and the music of this demanding art form. In addition, second-, fourth- and sixth-graders made up the chorus supporting Reinhardt.

As in Mozart&#8217;s day, Reinhardt had to work hard to win his audience. He did it narrating between scenes while choosing people at random to play Susanna, the count&#8217;s maid being wooed by Figaro.

Where Reinhardt parts company with Mozart is that he sings in English, which he concedes might not thrill purists. But he has to so students can follow the action.

&#8220;There&#8217;s nothing worse than an opera singer coming up here and singing in French. And I find that English is a very singable language,&#8221; Reinhardt said.

It was not an unsophisticated audience. Shayla Wright, a 12-year-old sixth-grader in the chorus, not only likes opera but her favorite piece of music is Beethoven&#8217;s &#8220;Fur Elise.&#8221;

Sixth-grader Nicole Valdemoro, 11, said her favorite part was when the chorus got to move their hands along with the maestro, then throw confetti at the end.